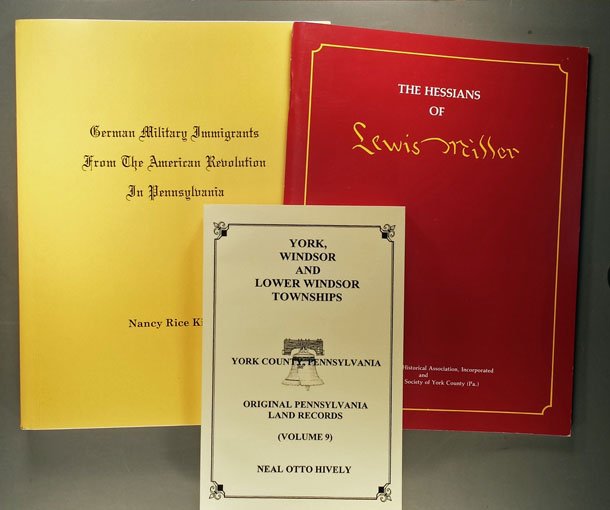 Our area has a high concentration of descendants of so called “Hessians.” This general term was applied to those soldiers from German-speaking regions whose rulers hired out their regiments to fight on the side of the British during the Revolutionary War. (Germany did not become a confederated nation until 1871, so the area we now know as Germany consisted of many smaller principalities during the time of the American Revolution.) British King George III hired about 37,000 soldiers to fight on Britain’s side. They were called “Hessians,” because a good proportion came Hessen-Kassel, but Braunschweig(Brunswick)-Wolfenbüttel, Hessen-Hanau, Waldeck, Ansbach-Bayreuth and Anhalt-Zerbst, were well represented.

Since the “Hessians” were not fighting for a country or cause in which they believed, they were susceptible to desertion. Many a time a deserter would be welcomed in joining the American troops. The regiments of “Hessians” were raised in Europe by voluntary enlistment and by draft. Some enlistees were said to have done so because of the prospect of a free trip to America, to which they wanted to emigrate anyway.

Many of the Hessians who ended up settling in our area were among those troops surrendered at the Battle of Saratoga in late 1777. After being held in Massachusetts for a year, they were marched right through here on their way to prisoner-of-war camps in Maryland in Virginia the next winter. I recently discovered that is how one of my ancestors ended up here, marrying a local girl and putting down roots. The author of a new book worked with many civil and church records, and, in most cases includes information on their wives, many of whom were local women, and on their subsequent children. Here is the story from my recent York Sunday News column:

Could you have a Hessian in your family tree?

I haven’t done much on my family history for many, many years. Even though it can be fascinating, it takes a lot of time and is easy to put off. But it is exciting when something falls into your lap when you weren’t even looking. For example: I have a “Hessian!”

York County History Center Director of Library and Archives, Lila Fourhman-Shaull, showed a new book to me, German Military Immigrants from the American Revolution in Pennsylvania. It was recently donated by the author, Nancy Rice Kiddoo. Writers often give copies of their books to libraries and archives where they have done research. This benefits other patrons, as well as the writers, as they then might be contacted by distant relatives with more information, or who want to buy their own copy. Kiddoo started out by researching her ancestors in Frederick County, Maryland, some of which were “Hessians.” Many of the soldiers in the book settled in York County after the Revolutionary War. Frederick County, which originally included the western part of today’s Carroll County, was often the next stop from here for families as members spread throughout the growing country. Entire extended families usually did not migrate, so some descendants of those soldiers still remain here. Many present day York countians can trace ancestry back to the “Hessians” that Kiddoo found. The United States Bicentennial Celebration in 1976 sparked a wider interest in genealogy and in our history. Kiddoo worked with various newer sources, such as lists of “Hessians,” published about that time. She visited many libraries and archives, including the Historical Society of York County (now part of the York County History Center), for research into church and civil records and family files. The book addresses nearly 500 of these soldiers, hired from the rulers of Germanic principalities, who stayed in this general area. It contains extensive information on many of the soldiers.

These hired troops are often lumped under the term “Hessians,” although they hailed from numerous Germanic principalities. A number of the families Kiddoo traces go back to the Convention Troops surrendered by British General Burgoyne to American General Gates at Saratoga, New York in October 1777. After years of being marched from one prisoner-of-war camp to another in Massachusetts, Maryland and Virginia, these British and “Hessian” prisoners ended up here in Pennsylvania in 1781, at Lancaster, at Reading (“Hessian” prisoners) and York’s Camp Security (British prisoners). Numerous “Hessians” escaped along the route of these mass moves, especially when passing through areas, such as York County, with a high population of German settlers. There they could blend in easily.

I was flipping through the book, noticing quite a number who put down roots in York County, when nearly a full page devoted to Daniel Voigt jumped out at me. The entry says that Voigt was a Brunswick Musketeer, Regiment von Riedesel, von Pöllnitz Company. His occupation was nailsmith. He deserted at Hanover, Pennsylvania on December 24, 1778 as the Convention prisoners were marched through here during relocation from New England to Frederick, Maryland and to Charlottesville, Virginia, where the bulk of prisoners remained until the war came closer to them in 1781. That is when they were sent up to us in Pennsylvania, remaining at York, Lancaster and Reading until the war ended in the spring of 1783 A very helpful website, Amrev Hessians, shows a timeline of movement for the Convention prisoners and confirms they passed through Hanover on that date.

I already knew that Daniel Voigt/Vogt/Focht is my fourth great-grandfather, but I did not know before that he was a “Hessian” or among those surrendered at Saratoga. He settled in eastern York County, marrying Anna Elizabeth Dellinger, daughter of Joseph Dellinger, in May 1784. (Coincidentally, Joseph Dellinger was a militia guard at Camp Security.) Baptisms can be found for eight of Daniel and Elizabeth’s children; the youngest, Barbara, married John Sloat/Schlott and is my third great-grandmother. Daniel died in 1835 in Windsor Township and is probably buried at Canadochly cemetery.

Well known York folk artist, Lewis Miller, illustrated 22 individuals that he called “ein Hesse” (“Hessians”). In conjunction with the Johannes Schwalm Historical Association, HSYC published Yorker Jonathan’s Stayer detailed biographical research and Miller’s drawings for each of these individuals in 1983 as a 67 page book, The Hessians of Lewis Miller. Copies of this book are available once more at the York County History Center.  These individuals were mostly residents of the town of York, where Miller also lived, so he missed identifying Daniel Voigt, and others, such as Johan Peter Ahl as York County “Hessians.” Quite a few of those that Miller did draw are included in Kiddoo’s book, including Leonard Baumgardner, Henry Henicker and others, such as Konrad Budding, who soon enlisted in Armand’s Legion to fight on the American side.

“Father of American Entomology” [study of insects] and Lutheran pastor, Carl Friedrich Valentine Theodore Melzheimer/Melsheimer, is included in the Kiddoo book. He came to America as the staff chaplain of Brunswick Dragoons. He deserted in May 1779 and served Lutheran churches in south-central Pennsylvania, dying in Hanover in 1814.

For a look into the lives of the prisoners, there are several well-researched books on the Convention prisoners surrendered at Saratoga; I am reading a recent one, A Generous and Merciful Enemy: Life for German Prisoners of War during the American Revolution.

Researching family history is much more than just names and dates. Those things are an important starting point, but learning about where they lived and more about their occupations and way of life can make them come alive. Exactly how did a craftsman make nails? Where did they live? That question can sometimes be answered by Dr. Neal Hively’s series of books and maps identifying land owned by early settlers of York and Adams Counties (also available at the York County History Center). Hively’s research identifies Daniel Vogt owning land in what is now Lower Windsor Township in the Mt. Pisgah area.

Family history researchers often mention hitting a “brick wall,” but you never know when something, like this new book on the “Hessians,” might cause that wall to crumble.