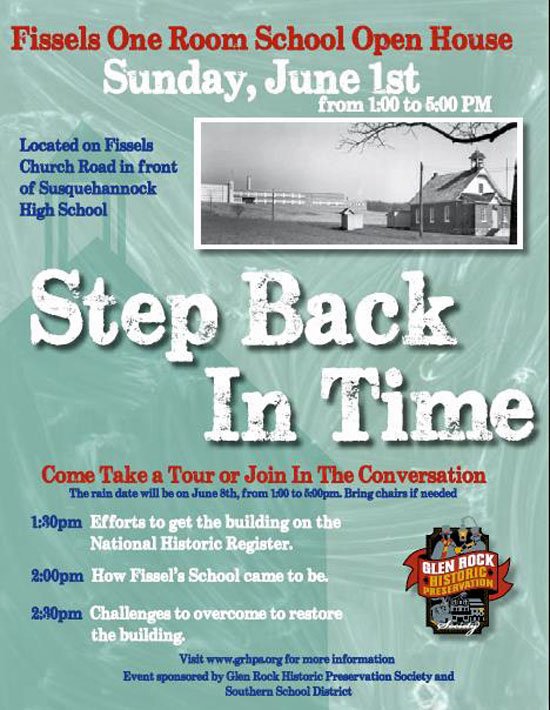 Want to experience what is was like to go to a one-room school? Or maybe you did attend one, and would like to step back into that time. Here is how you can:

The Glen Rock Historic Preservation Society and Southern School District is inviting the public to the historic Fissel’s One Room School on Sunday, June 1. The open house and tours will run from 1 p.m. to 5 p.m., with special programs throughout the afternoon. The preserved school is on the grounds of Susquehannock High School near Glen Rock.

Fissel’s School was added to the National Register of Historic Places in 1997. Below is an excerpt from the 1996 nomination form, explaining the historical significance of the school:

“Fissel’s School stands today on the 95-acre campus of the Susquehannock High School, the last one-room school in Shrewsbury Township still in public ownership. School officials decide to construct the modern high school on a hill, far behind the old schoolhouse that stands close to the public road. School officials decided also to preserve the old schoolhouse as a museum. A volunteer group has collected suitable furnishings, such as desks, chairs and bookcases, and has gathered for display artifacts and mementos from residents who were former students at Fissel’s School. These objects are displayed in the school’s vestibule and in the schoolroom, and are important resources which document the history of education both in the township and in the county. As the result of these combined efforts, the school today is in the same condition and has much of the same appearance as on its last official day as a one-room school house.

Fissel’s School is a prominent landmark on the school grounds, a daily reminded of the advances that have transformed public education in the one hundred years since its construction. Typifying in it plan, siting and architecture the standard one-room school design built in the county in the late nineteenth century, Fissel’s School embodies and documents a significant period in local history and in the history of education in York County, Pennsylvania.”

Here is a link to my York Sunday News column on how one-room school were planned, furnished and equipped.

This link will take you to my previous blog post on Wills School, in Lower Windsor Township near Yorkanna, which is also periodically open to the public.