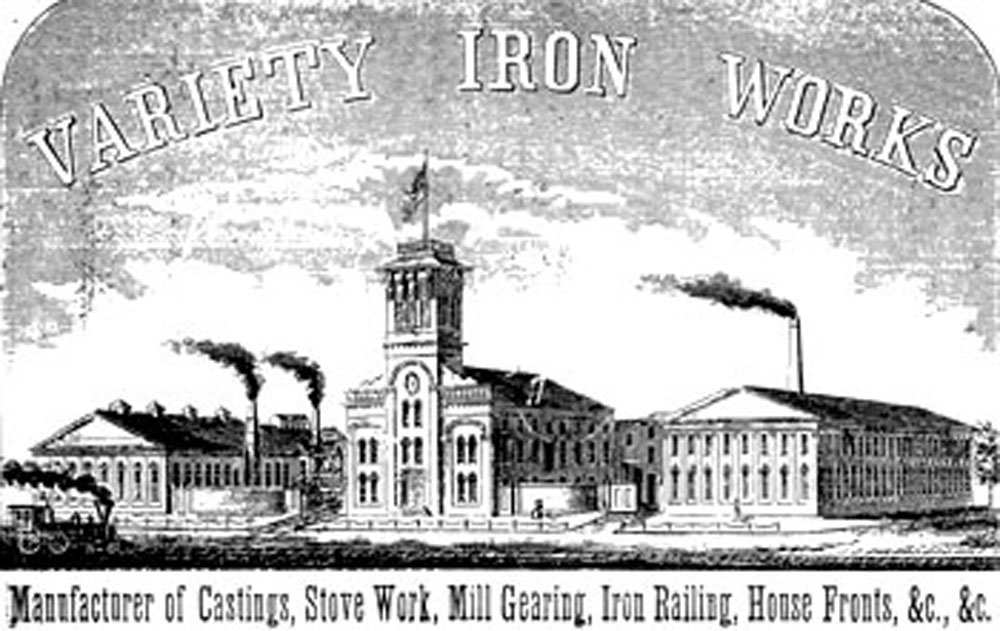 Variety Iron Works from 1868-69 city directory at York County Heritage Trust
I am glad to see that some of the remaining buildings of the Smyser-Royer Variety Iron Works complex are part of York City’s Northwest Triangle redevelopment project.
One of my York Sunday News columns outlined the metamorphosis of the company from a small stove manufacturer to a huge fabricator of mill gears and turbines; garden benches, fountains, and statuary; cast iron buildings fronts; light posts; lacy iron railings, such as the famous ones in New Orleans; iron bridge parts; and much more. You can read that column below.
Then I just came across an article in an 1867 York Gazette that added even more variety to the company’s products.

That article reads: “Besides the already diversified character of the manufactures turned out from Mr. E. G. Smyser’s Variety Iron Works…the enterprising proprietor has added another very important branch…we refer to the building of Steam Engines.
It is known as Isbell’s vibrating engine, and is a very neat, compact and peculiar machine, working smoothly and noiselessly. It is 26 horse power, and occupies an incredibly small space.”
A lengthy description of exactly how the engine works follows. The item ends by giving credit to two employees: “The patterns were made by Capt. John Hays, of the pattern department, and the whole was constructed under the superintendence of Mr. Alexander Duncan, foreman of the machine shops attached to the works.”
Click here to read more about steam engines in York County.
The Sunday News column on Variety Iron Works follows below:

York County’s Connection to New Orleans’s French Quarter
Even though it will take years of hard work and unimaginable sums of money to rebuild New Orleans, the city and its spirit will survive. Reports state that the French Quarter suffered much less damage than some areas of the city. Perhaps part of the architectural survival could be attributed to the beautiful and sturdy cast iron balconies and fences of the French Quarter. In all probability, much of that ironwork was probably manufactured in York a century and a half ago at Variety Iron Works.
The local company was founded in 1840 by Elisha Geiger and Samuel Bechtol. In 1846 Dr. Alexander Small (younger brother of merchants and leading citizens Philip A. and Samuel Small) replaced Geiger. Bechtol in turn was replaced by Edward G. Smyser in 1853. Small died in 1862 and Smyser was the sole proprietor until 1907 when he was joined by B. Frank Royer. The firm continued manufacturing until 1941.
Few records are known to exist for the company, but those that do, in conjunction with contemporary advertisements and newspaper articles, chronicle an amazing metamorphosis from a small stove manufacturing concern to a huge fabricator of building fronts, interior and exterior railings and stairs, lighting fixtures, statuary, fountains, garden furniture, and iron bridge components. Variety also had divisions that produced iron shafts and gears for mills and industrial castings in addition to continued production of stoves for home heating.
With the absence of shipping records, it cannot be said with certainty which of the picturesque lacy ironworks of New Orleans came out of Variety’s West North Street foundry, but existing catalogs at York County Heritage Trust show a dazzling array of patterns identical to those still seen in the French Quarter. In an especially intriguing news article, a writer in 1859 tells that, on a visit to the factory he saw the just fabricated “massive gateway and fence designed for the Roman Catholic cathedral in New Orleans.” Present-day photos of St. Louis Cathedral on Jackson Square, the centerpiece of the city, show that it is still surrounded by impressive ironwork, very probably the same as that described at the works.
Other cities most likely also provided New Orleans builders with ironwork, but they may additionally get credit for part of the York products. For example, Baltimore is often cited as providing New Orleans ornamentation, perhaps in part because by 1880 Variety Iron Works had its whole warehouse operation in Baltimore. The entire five acres of York plant could then be devoted to manufacturing. The Variety factory, much of which still stands today, had a railroad siding. The heavy iron could be put directly on the railcars and shipped to Baltimore to be warehoused and loaded on other cars or ships for transport.
New York is also mentioned as a New Orleans iron supplier. Granted, that city did have foundries, but it is well known that J. W. Fiske of New York, one of the largest suppliers of cast iron fountains, urns, and other garden furniture in the United States, had all of their ironwork manufactured by Variety Iron Works.
The company continued to thrive. In the twentieth century many famous architects, such as John Meade Howells and Mellor, Meigs and Howe, kept on using Variety iron for structural and decorative purposes in the public buildings and private homes they designed. A Philadelphia office was soon opened and the foundry’s work in iron, brass, and steel can be found on and in banks, railroad stations, universities, post offices, hospitals and immense office buildings built there and elsewhere during the first half of the last century.
Artisans were still being carefully trained in the twentieth century, some through co-operative industrial apprenticeships in conjunction with York High School. In 1927 a student in the ornamental ironwork program would contract to work 5,400 hours over a three-year period. He was paid on a sliding scale of seven to fifteen cents an hour, but when he graduated he could look forward to a good job with the company.
The Variety Iron Works buildings have been used by other companies since the foundry closed in 1941. The brick office building with cast iron lintels still stands on North Street, and the iron lions that guarded the gates are on display at York County Heritage Trust. In York and elsewhere, fences still mark boundaries, fountains spray and urns overflow with flowers. Lacy ironwork edges balconies and verandas. Feet tread up and down stairs graced with sturdy patterned railings. New Orleans, Philadelphia, Chicago, St. Louis, State College, York, all over the country—durable, solid metal cast in York by Yorkers is still holding strong.