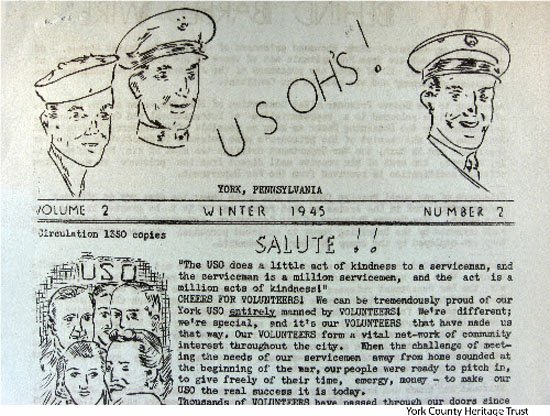 A friend who has two grandsons in the Navy recently commented on how much those grandsons have appreciated services offered by the USO.

Although fellow blogger Jim McClure has written about York’s very active World War II USO, and I have done a couple of USO blog posts too, I thought it would be good to share more of the stories of the good work done by local volunteers to make those young men and women serving their country feel at home here for a little while. My recent York Sunday News column, based on York’s U S OHs! newsletters, is below:

York’s USO “home away from home” during World War II
The United Service USO (United Service Organizations) is a governmentally recognized private non-profit that offers support to U.S. military members and families. The Salvation Army, YMCA, YWCA, National Catholic Community Services, Travelers Aid Association and the Jewish Welfare Board formed the USO, with the encouragement of President Roosevelt, before the U.S. officially entered World War II. The USO today operates facilities at many military bases and major airports such as Fort Meade, Md. and BWI airport.

Some military personnel stayed for only a few minutes, their trains pausing at York’s busy Pennsylvania Railroad Station on North Street. USO volunteers staffed a booth there, supplying the servicepeople with refreshments and cigarettes. Junior USO Hostesses carried trays along the platform, handing the treats in the train windows. York’s USO also aimed to give others, here a few days or longer, “a home away from home.”

In January 1943, the USO’s servicemen’s club and canteen opened in the old York County Academy buildings on North Beaver Street, in cooperation with the York Recreation Commission, which operated out of the buildings during the week, and the academy’s trustees. York’s Cooperating Agencies were the same six national organizers listed above. York Recreation Director Margaret Swartz served as the director of the club and canteen and board treasurer.

“The main building and gym were completely renovated and attractively decorated in bright colors in Pennsylvania Dutch style.” The main building included a comfortable “Lounge Room” with a radio/record player and writing and reading materials. The “Quiet Game Room” had card and table games and puzzles. Four ping-pong tables, dart games, and a pool table furnished the “Active Game Room.” Crafts, tools and materials were available in the “Craft Room,” as were facilities for sewing and pressing.

The old Academy gym became a canteen described as having: “…gay Pennsylvania Dutch designs on the walls, cherry colored woodwork, large antique benches covered with quilted calico, a red gingham ruffled canteen table and dim light created from genuine antique lanterns and many candles, [to] provide atmosphere and local color. The canteen table specializes in Pennsylvania Dutch food and the Sunday morning breakfasts are a memorable occasion to all servicemen and women who partake of these bountiful repasts.” The decoration, some of which still exists in the still standing canteen building, was executed by local artist Margaret Sarah Lewis. The USOhs newsletter bragged: “Some connoisseur of art claimed the Pennsylvania Dutch decorations on our Canteen walls are a $1000.00 job. Peg Lewis and her committee did them for US for 0.”

The canteen was equipped with “a juke box, a Victrola, all the latest records, two pianos, and a special setting for the orchestra, which made the canteen ideal for dancing, good food and entertainment galore in colorful surroundings. Shower and shaving facilities are also available in the canteen.” Umbrellas, tables and chairs were set up in the yard in the summer, with an outdoor dance floor, lined for shuffle-board. Other sports equipment included badminton, archery and horseshoes.

WSBA broadcast interviews with the servicepeople Sunday evenings, and shows were put on in the canteen. The USO also sent personal recordings made here back home to families.

Junior Hostesses, age 18 or older, were supervised by the Senior Hostesses and had to follow rules: Report on time, do not stay over time; enter by front, show card and register; wear id ribbons on duty; no wearing sweaters and: “Remember: You do not go to the USO Club to be entertained, but to entertain.” The Junior Hostesses had to decline invitations of servicemen to escort them home, but they were encouraged to wear nice dresses and look good while lending a sympathetic ear and dancing with the visitors.

Local citizens hosted servicemen and women and the hostesses for picnics, swimming, ice skating and parties. One newsletter article recounts an outdoor “Wienie Roast” held on an October Sunday afternoon at Haines’s Wizard Ranch. With truck and driver courtesy of Read Machinery Co., the USO took out truckload “of handsome servicemen and windblown glamour girls, who arrived half frozen at the Ranch” They “took a trip through the museum and the cow barn, then ate and drank everything in sight, an “unbalanced diet of pickles, olives, potato chips, rolls with wienies, rolls without wienies, homemade relish, coffee without sugar (rationed), but plenty of cream and York County apples.” The first-hand account continues: “About four-thirty we all piled into the truck and started for home with the wind and men in our hair.”

USO Hostesses also joined the Daughters of the American Revolution, Junior Service League and Women of the Outdoor Club in selling War Savings Stamps at the Victory House, a replica on the square of the colonial courthouse.