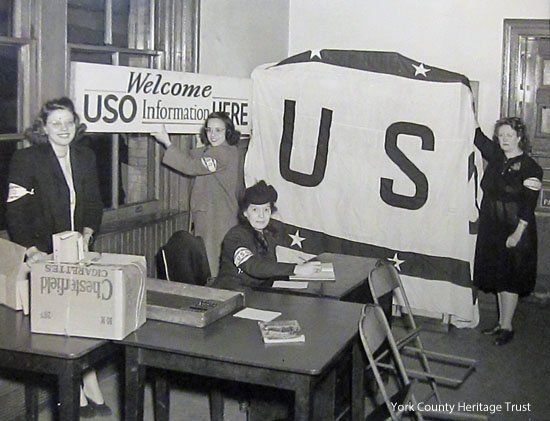 It mentions a fifth anniversary USO celebration, so it is probably from February 1946, five years from Franklin D. Roosevelt’s presidental order issued in February 1941 forming the United Service Organizations. Even though the fighting was over in 1945, troops and support were returning home to bases and then back to their homes for months afterward, so USO services were still needed and appreciated into 1946.

“After three and one-half years of honorable service, York’s U.S.O. railroad canteen was decommissioned last evening following an open house at the U.S.O. club in celebration of the fifth anniversary of the national U.S.O. In the picture above, left to right, Jean Heilman Throne is seen packing ‘a few left-overs from a busy day.’ Mrs. Vernon D. Heilman is recording the end of the day’s activities, Catherine Aughenbaugh (later Rinehart) is taking down the welcome sign and Mrs. O.E. Grim is folding the big U.S.O. banner. The P.R.R. canteen was begun in August, 1942 by the U.S.O. with Mrs. Harriet Horton of the Y.W.C.A. as chief of staff. She supervised the entire station project with the assistance of following captains: Mrs. Robert L. Graybill, of the Salvation Army; Mrs. W. H. Beckner, National Catholic Community Service; Mrs. H. A. Weidner, Y.M.C.A.; and Mrs. Ben Lavetan, Jewish Welfare Board.

With 40 volunteers the organizations rotated weekly, serving in the three and one-half years more than 150,000 men and women in the uniforms of the armed forces of the United Nations, regardless of nationality, creed or color. Served by senior and junior hostesses, the personnel were distributed foods contributed through churches, civic organizations and individuals. Tremendous quantities of sandwiches, cakes, candies, fruits and soft drinks were donated, in addition to thousands of printed sermons from churches in York County, pocket size books and magazines. This service resulted in the receipt of hundreds of thank-you notes and letters from men in all parts of the world.

Another service was the use of the U.S.O. booth in the P.R.R. depot as a meeting place for service men and their families and friends. On many occasions also, small youngsters were left in charge of senior hostesses between trains, while their parents toured the city. Both army and navy officers of high rank took the time to compliment the women on duty personally for their services to the Army, Navy, Marine Corps and Merchant Marine. Within a few weeks, after all the names of those who served are listed, a farewell celebration will be held at the U.S.O. canteen at which distinguished service certificates will be awarded.”

The identification of the women may not be correct in the clipping. There is a note with the photograph that the woman on the left with glasses at the Chesterfield carton is Jean (Heilman) Thorne, the woman seated at the table is Catherine Aughenbaugh and the woman with glasses in the center with the USO information sign is Mrs. Vernon D. Heilman. If you know these people, and that isn’t correct, please contact me through the comment section below.

(Thanks to Marcia Rinehart Smyser, who donated the original photograph to the York County Heritage Trust Library/Archives corrections and provided the correct identifications. Some of the subjects were misidentified in the original newspaper article.)