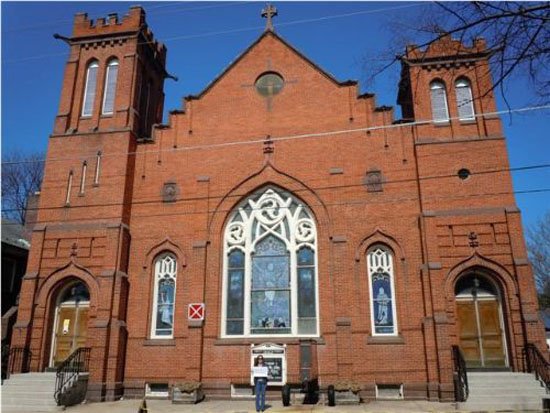 Last year I did several posts on the threatened demolition of Trinity United Methodist Church. Trinity was formed as an Evangelical congregation in 1871, with the present building, designed by noted York architect Harry Yessler, dedicated in January 1897. Denominations merged over the years, changing Trinity to Evangelical United Brethren and then United Methodist. Follow this link to my posts with more history, photos and drawings of Trinity over the years or search for Trinity on the Universal York home page.

I was pleased to see by today’s York Daily Record that a fairly new, but growing, independent congregation, The Potter’s House, has purchased the church and will use it to reach out to the community. I commend Trinity’s former congregation, now merging with another United Methodist church in the area, for allowing this to happen. Historic York, Inc.; York’s Historical Architectural Review Board (HARB) and York City Council also played a role in saving this piece of York County history, as did the mortgage funder.

The Potter’s House has a lot of fundraising to do to fully realize their dream of a place of worship and community center, but it certainly sounds like they are on the right track. Thanks from the historical community are due The Potter’s House and also Blessings and Best of Luck in their new home.