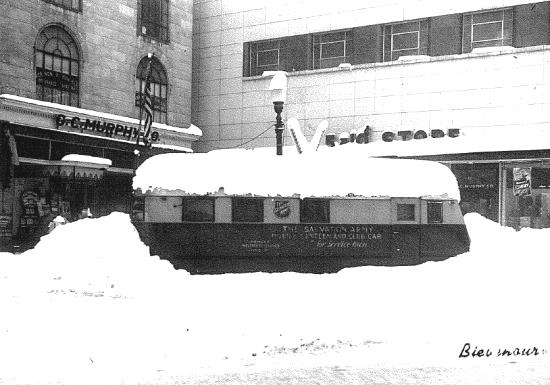 I learn a lot from the readers of this blog and of my York Sunday News column. Please keep sharing your information.

In my recent column and blog on York’s USO activities I mentioned that the Salvation Army was one of the USO’s founders, nationally and locally. George Lenkner of the York Salvation Army informed me that: “Here in York, The Salvation Army also had a Service Men’s Canteen on the Square to serve military personnel passing through.” He kindly attached scans of a photo of the canteen positioned in the northeast corner of the square (covered with current-looking snow). Lettering on the canteen says it is a Free Salvation Army Mobile Canteen and Club Car for Servicemen and a Member of the Welfare Federation and USO.

George also scanned the front and back of a postcard showing the mobile canteen. It was sent from York on July 14, 1944 to Miss Mildred Sheaffer, Huntsdale, Cumberland County, Pa. from Cpl. G. Brinton, P.W. Camp, Stewartstown, Pa. It reads: “ Thur. night. Millie, At last we caught up with the work which piled up this week. Finney is returned from pass, so he is holding down the orderly room while I came in to see Eddie Cantor’s latest picture. See you soon. Jerry.”

As George points out, Corporal Brinton’s post was as a guard at the Prisoner of War camp at Stewartstown. For more information on the camp and its German POWs see Jim McClure’s blog posts and this link that will take you to a detailed York Daily Record article by Mike Argento.

By the way, 2014 is the 125th Anniversary year of The Salvation Army in York.

Here’s a link to my previous post on two German POWs that escaped from Gettysburg almost to York.