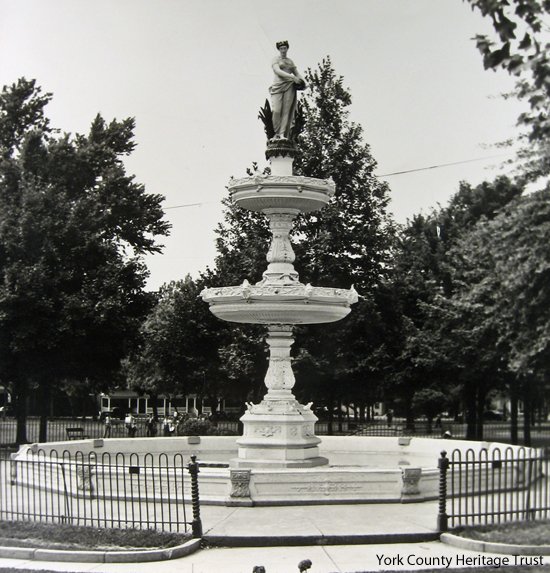 I’ve always loved fountains–the bigger, the better. Unfortunately, I don’t remember the towering Rebecca at the Well fountain that graced Penn Park from 1898 to 1968. I grew up in rural York County–we came into town to shop when I was a child, but rarely detoured by the park. A lot of you, though, do remember the fountain in the park, just across the street from York High.

Besides being the glory days of the urban park movement, the 1890s and early 1900s were also peak years for picture postcards. There are at least eight different postcard views of the Rebecca fountain in the York County Heritage Trust files. I’ll share those later. The two illustrations here are an artist’s rendering from the York Daily at the time of dedication and the photograph above, probably from the 1950s.

My recent York Sunday News column below gives a recap of the planning, funding and dedication of the fountain. As attested by the thousands of people who stood for hours throughout the Labor Day 1898 dedication, it was a really big deal.

The Lost Fountain of York’s Youth

The urban park movement was in full swing in 1890 when York Mayor Noell met with businessmen A. B. Farquhar and Jere Carl and City Engineer James G. Durbin to take a new look at Penn Common. The plot had been set aside in the 1740s for common use of local citizens. The grounds had been a public pasture and saw use as a training ground for soldiers during the Revolutionary War, War of 1812 and Civil War. A large Army hospital covered much of the site from 1862 to 1865, treating around 14,000 soldiers. The location was used for fairs and entertainments from balloon ascensions to circuses.

Now these new visionaries pictured a shady ground where Yorkers of all levels could enjoy healthful air and exercise. Pasturing of cattle would be prohibited, paths laid out and trees planted after the somewhat hilly grounds were graded. (The latter was later seen as a mistake, when experts lauded the charm of uneven ground in other municipal parks.)

Farquhar, who became chairman of the Parks Committee, and others, contributed funds for trees, shrubbery and grass. The city agreed to do the grading, have drainage sewers installed and construct foot paths. York’s city councils passed ordinances prohibiting depositing rubbish and “riding or driving any horse or mule or other beast of burden or any vehicle in, upon or over any part of said Common” or damaging any plantings. Within a few years the paths, trees and grass were in place.

What next for the grounds? Groups began to vie to provide further improvements for the enjoyment of Yorkers. The Ivy Minstrels built a bandstand for the park, funded by two benefit entertainments and personal solicitations. Alderman Jacob Stager, president of the Minstrels, formally turned over the new bandstand, lit by 16 electric lights, to Mayor Charles W. Brant on July 30, 1897 during a concert by the combined Springgarden, York City, Mystic Chain and Bender’s bands. Stager did grouse a bit that the Penn Park bandstand could have been bigger if contributions had been higher. Then the York County commissioners approved $23,000 to erect the impressive Soldiers and Sailors Monument, over 60 feet tall and designed by York’s leading architects, J. A. and Reinhart Dempwolf. This Civil War monument, still visible for blocks down Beaver Street, was dedicated July 15, 1898.

Just a few months later, on Labor Day, September 5, 1898, the huge Penn Park fountain, just a short distance from the Civil War monument, was dedicated. Speeches were given and bands played to a “vast crowd,” most of which stood for the whole two hour program. The “…not only imposing, but elaborate” ceremonies received columns of print in all three York daily papers, The Gazette, The Daily and The Dispatch as well as the weekly Democratic Press.

According to news items of the time, the ground basin was 30 feet in diameter and it was four feet deep. In its center, a five-sided granite base held the ornamental standard supporting the first basin, which had a diameter of 10 feet. From there a second ornate standard held the top basin, from which rose a third decorative pedestal supporting a life size woman, representing the Biblical “Rebecca at the Well.” Water jetted out “from scores of reeds at the sides and rear of the figure.” The main stream of water flowed from the urn she held under her left arm. It fell into the top basin and then gushed from four lion head spouts into the first basin. Four more lion head spouts on that basin conveyed the water into the ground basin.

This ornamental iron fountain, which was originally painted in a granite stone color, was manufactured in York at E. G. Smyser’s Sons’ Variety Iron Works. (Highly ornamented iron fountains of all sizes, as well as garden urns and garden furniture were sold all over the country under the name of J. W. Fiske of New York. As far as I know, Fiske never had their own iron works and most, if not all, of these popular iron items were manufactured in York at the huge Variety Iron Works plant at North and Beaver streets.)

The speakers at the dedication, especially Park Commissioners A.B. Farquhar and M.L. VanBaman, pointed out that the fountain project cost the city nothing. They thanked the many contributors and suppliers individually for their donations of money and materials. The Smyser brothers subscribed a “goodly sum” of the iron work themselves and allowed the balance to be paid in installments. The orators used the occasion to persuade the audience to help defray the remaining balance.

Finally, the last of the 12 speakers, their addresses interspersed with selections played by the York City Band, finished. As the program ended, “VanBaman gave the signal, and in a moment the entire fountain from base to tip was lit up with scores of colored incandescent lights [red, green and frosted white], presenting a scene such as can be imagined, but hardly described.” Another paper reports that upon illumination “…several thousand persons shouted and cheered in hearty appreciation of the new and valuable improvement to the park.” Many of these citizens lingered, enjoying the spectacle and the “excellent concert” that followed, performed by the Springgarden band.

Visitors to Penn Park enjoyed the fountain for many years. At some time in the mid-20th century Rebecca was painted in lifelike colors. I am told that the color of her garments changed when fresh paint was applied. Needing repair, the fountain was sold by the city in 1968. I understand that not too many years ago it was in private hands in storage. Other communities have restored similar fountains. I wonder if there might be a possibility of someday seeing Rebecca come to life again in a revitalized Penn Park or in the Square? 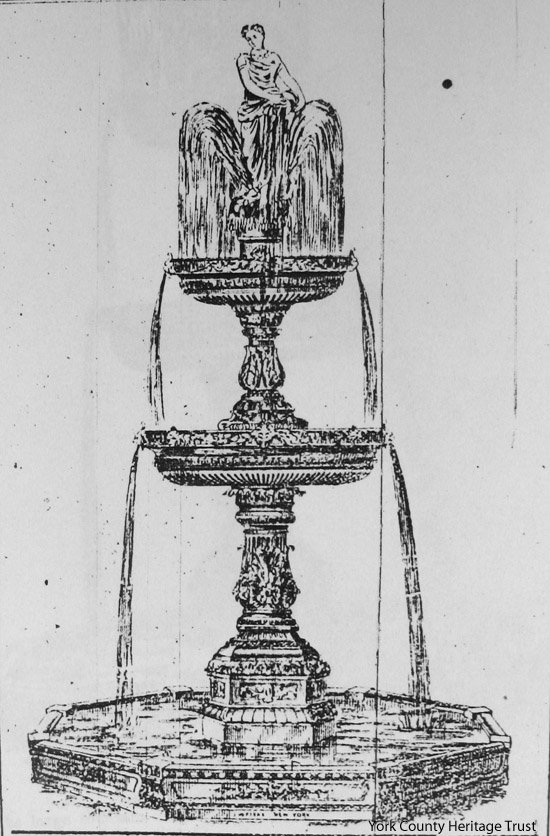