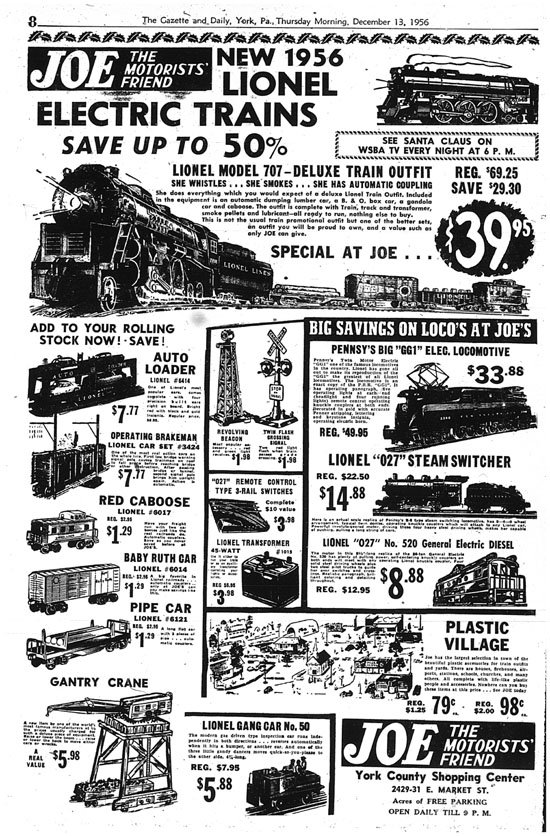 The full page ad from Joe the Motorist Friend (see below) is almost exclusively for Lionel trains, a specialty of the Joe’s stores. The address at the bottom of this ad and the toy ad in my last post, both from the December 13, 1956 Gazette and Daily, cite the store at the year-old York County Shopping Center, with its “acres of free parking. There were other Joe’s stores, however, scattered throughout the county.

The Lionel train set sounds like a deal at the sale price of $39.95 (Reg. $69.25). It still was a substantial present; one online calculator indicates that is the equivalent of $350 today. This set includes a locomotive that whistles and smokes, an automatic dumping lumber car, a B. & O. box car, a gondola car and caboose, as well as tracks and transformer.

Several separate replica locomotives are offered at sale prices too. The description of Pennsy’s [Pennsylvania Railroad] GG1 electric locomotive reads: Lionel has gone all out to make its reproduction of the GG1 the greatest of all Lionel locomotives. The locomotive is an exact copy of the P.R.R. GG1. It has operating pan[t]ograph, five operating lights at each end (headlight and four running lights), remote control operating knuckle couplers at both ends. Decorated in gold with accurate Pennsy stripping, lettering and keystone insignia, operating electric horn.” Reg. $49.95, now $33.88.

Other cars and accessories are also offered. I like the operating brakeman car set. The description says the “first low bridge warning signal pole causes trainman on roof to fall prone before reaching bridge or other construction. After passing bridge or tunnel, second signal pole brings him upright again. Action is automatic.”

The gang car sounds like fun: “The modern gas driven type inspection car runs independently in both directions…reverses automatically when it hits a bumper, or another car. And one of the three little gandy dancers moves quick-as-you-please to the other side.

No train layout would be complete without a village. Joe says: “There are houses, firehouses, airports, stations, schools, churches and many others. All complete with life-like plastic people and accessories.” They are offered at the bargain prices of 79 to 98 cents each.

Joe the Motorist Friend was a regional chain. According to reader’s memories shared on several of Joan Concilio’s blog posts, the founder was Joe Stein of Harrisburg, and there were stores in Pennsylvania, Maryland, Virginia and West Virginia.

The links below will take you to my other recent posts from Christmas season 1956:

Exodus to the shopping center.