York’s Historical Markers on the Square–Part 3 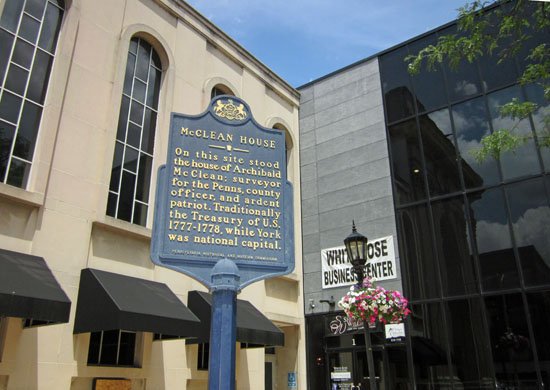 The marker above describes the third of the five sites commemorated by the Pennsylvania Historical and Museum Commission in York’s Continental/Center Square. As with some of the others, it refers to the time that the center of York was the center of United States government when Continental Congress met here from the end of September in 1777 to the end of June 1778.

The site, on the northeast quadrant of the square, is said to be where the U.S. Treasury was deposited while Congress met just a few steps away in the York County courthouse, at that time situated in the middle of the square.

McClean House
On this site stood the house of Archibald McClean; surveyor for the Penns, county officer, and ardent patriot. Traditionally the Treasury of U.S., 1777-1778, while York was national capital.

There is so much of our history contained in such a small area. I really appreciate having the familiar blue and gold markers there to remind me every time I stroll or drive by.

Click the links below for my previous posts on square markers:

Information on Pennsylvania’s historical markers, including text on the markers and their locations can be found on the PHMC Historical Marker website.

For markers nationwide and beyond, click this link for The Historical Marker Database, “Bite sized bits of local, national and global history.”

Photos of the over 50 PHMC markers in York County can be found on the Virtual York website.