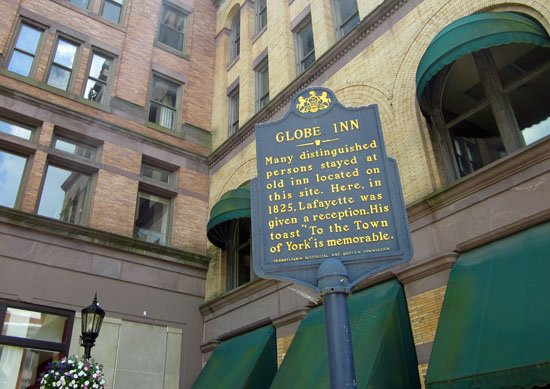 This is the fourth in my series exploring the five Pennsylvania Historical and Museum Commission markers in York’s Continental/Center Square. The marker commemorates the site of the historic Globe Inn on the southwest corner of the square. It reads:

Globe Inn
Many distinguished persons stayed at old inn located on this site. Here, in 1825, Lafayette was given a reception. His toast “To the Town of York” is memorable.

Lafayette was touring the United States in 1825, revisiting many of the places he knew from his Revolutionary War service with George Washington. He was familiar with York, as he had met with Congress and the Board of War here when York was the seat of the United States government 1777-1778.

Yorkers welcomed Lafayette with open arms during his 1825 visit. An original account book concerning the lavish banquet, with 100 attendees, at the Globe Inn is in the York County Heritage Trust Library/Archives. That evening Lafayette offered this toast:

“The town of York. The seat of the American Union, in our most gloomy times; may its citizens enjoy, in the same proportion, their share of American prosperity.”

I’ve been surprised how many different websites, besides that of PHMC, cite the markers with text and directions on visiting them. Here is another, a site called Waymarking.com.

Click on the links below to read the three previous square marker posts.