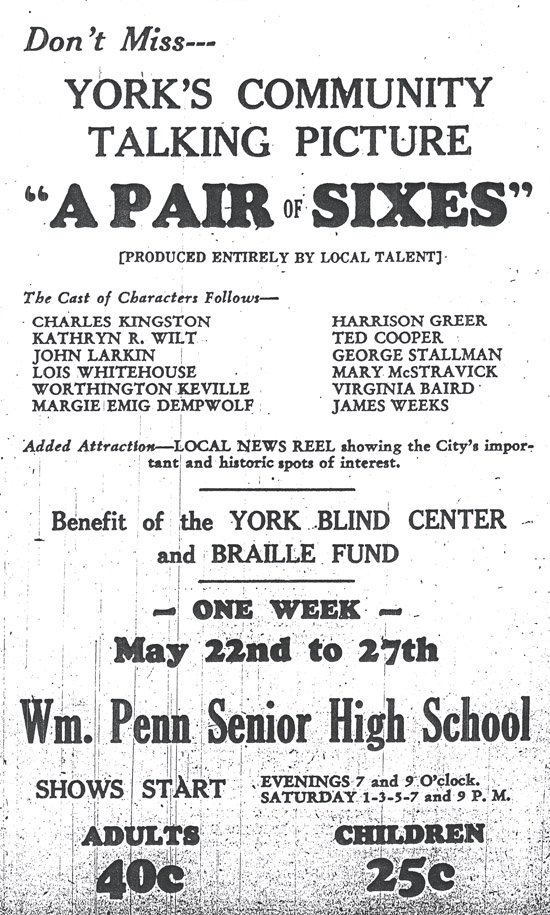 The 1927 movie, The Jazz Singer, starring Al Jolson, is widely recognized as the first successful talking motion picture (talkie). As often happens, when looking for something entirely unrelated in the newspaper microfilms at the York County Heritage Trust Library/Archives, I came across an article, as well as the ad above, about York’s own “talkie,” filmed not too many years later after Hollywood followed the trend.

The article below, from the May 19,1933 York Dispatch, sounds like it was quite a production:

12,000 Feet of Film Used for York Talkie
Shooting of Scenes Complete and News Reels Are Taken
12 Yorkers in Picture

Twelve thousand feet of film were used for the filming of the York talking picture, “A Pair of Sixes,” which features 12 local actors in the cast.

News reel scenes of York and vicinity have been taken and through them Yorkers will be allowed to be acquainted with the city’s oldest woman, Mrs. Margaret Angell, 102 years old. Numerous down-town “shots” were taken and the sponsors of the picture, the proceeds of which will be given in part to the York Blind Center, are counting on this fact to draw many persons to see the picture. It will be shown in the William Penn Senior High school during the whole of next week.

The talkie required two months to make, and only one retake was made due to the faulty acting on the part of the local cast.

The junior committee of the Woman’s club is sponsoring the show and local committees have made all arrangements.

Scenes in the talkie itself are laid at the Grantley plant of the York Ice Machinery Corporation; the home of Joe Kindig, 234 East Market Street; the Yorktowne Hotel; the York Airport; the Country Club of York and an office on East Market Street. In the news reel will be “shots” of the Spring Garden band drum corps, Continental Square, county scenes and news events.

The play was coached by Miss Mary Vaughan and the filming was in charge of a cameraman and sound technician.