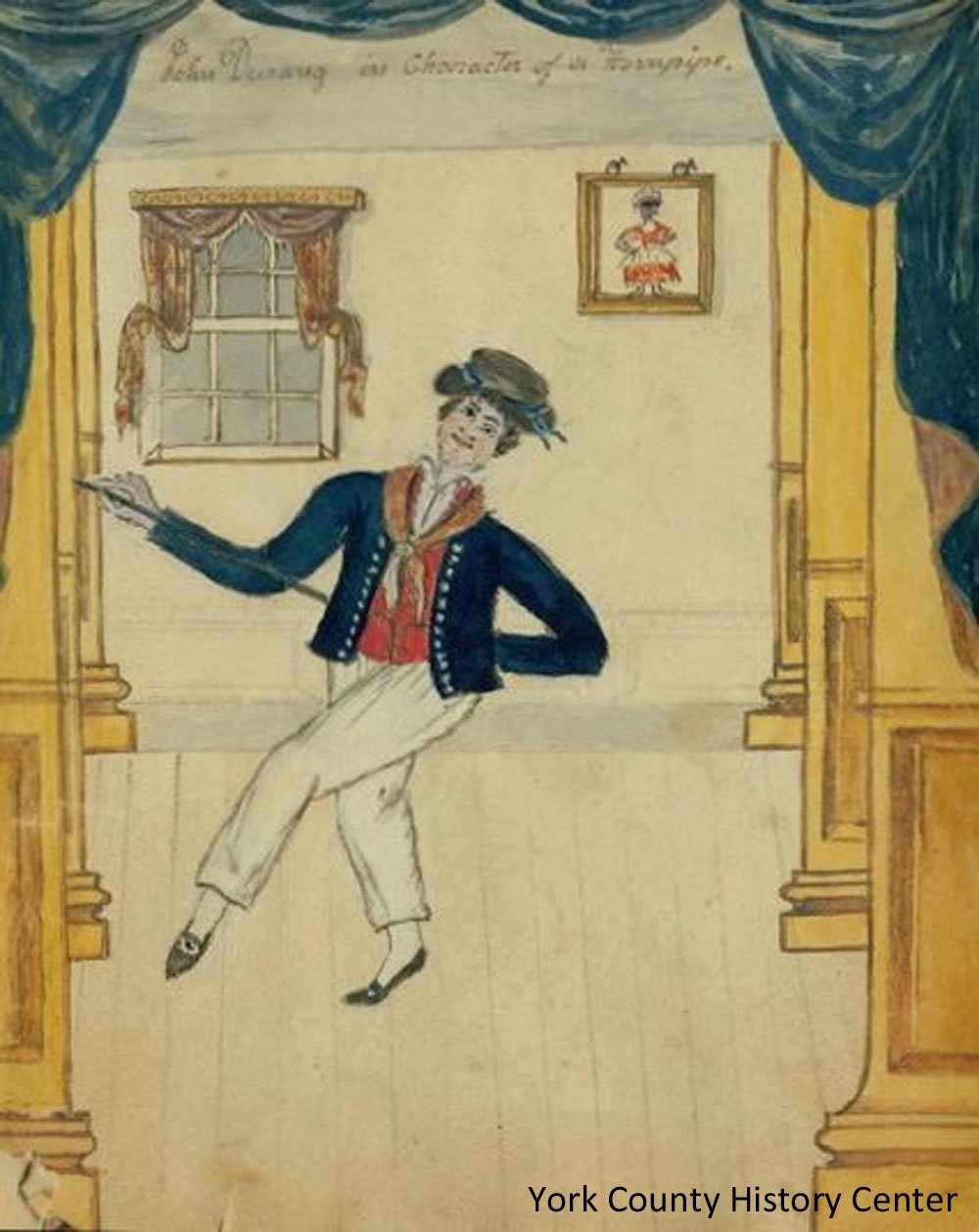 What was the connection between the preforming Durang family, who spent some time in York during the early 19th century and our national anthem?  I wrote a York Sunday News column on the subject in 2006.  I just realized I never posted the column on this blog, which I started writing in 2007.  (See below for the original column.)

Research should never be static, especially as it becomes easier to access primary and more abundant secondary sources.  I have revisited the Durang connection since I wrote the column all those years ago, and I plan to keep looking into it.  A quick Google search shows that the myths that surround Ferdinand and Charles Durang and the Star Spangled Banner have been repeated many thousands of times, including on sites that are usually judged as accurate.

At this time, I doubt that the Durangs married Francis Scott Key’s poem to the Anacreon in Heaven tune; all of those accounts seem to go back to a story told by Chief Justine Taney, Key’s brother-in-law, some years later.  Also, I think it was almost certainly performed for the first time publicly at the Holliday theater in Baltimore by a Mr. Hardinge, as was reported in contemporary Baltimore newspapers, although the Durangs did appear at the theater during the same period.  As to the oft-repeated tale that Ferdinand Durang did do an impromptu performance before the theater performance at McCauley’s Baltimore theater probably isn’t likely, but it could have been possible. I do believe that when the Durangs returned to York in 1815 they very probably were the first to publicly perform it in York.  We will see what further research indicates.

Our national anthem appears in the news often, especially in the summer.  It is called to mind on our most patriotic of holidays, the Fourth of July.  Offbeat renditions at ball games make the news.   This year the value of non-English versions was also hotly debated.

Local residents may remember there is some connection between the origins of The Star-Spangled Banner and York County, but what?  Doesn’t it have something to do with the Durang family of actors, who lived and performed at one time or another in York, Lancaster, Harrisburg, and Baltimore?  When doing research, too much “information” on a subject is sometimes worse than too little.  An online search for “Durang” and “Star-Spangled” produced 4,660 hits.  Many of the sites just repeat stories that can be traced back to a few somewhat questionable sources.  Other resources do not concur with one another.  About the only facts most sources, published or online, agree on is that: (1) The original poem was written by Francis Scott Key, who witnessed the attack on Fort McHenry on September 13/14, 1814 from a ship.  (2) It was set to a tune entitled To Anacreon in Heaven, which had been written in London in the 1770s,  .

Young Maryland attorney Francis Scott Key had gone aboard the British flagship, the Tonnant, along with government official John S. Skinner, to negotiate with British Admiral Cochran for the return of Dr. William Beanes, of Marlboro, Maryland, who was being held prisoner aboard ship.  They were successful and Beanes left with Key and Skinner.  The three Americans were probably back aboard the HMS Minden, the small British vessel that had carried them out to the flagship when the assault began.  They were not allowed to return to shore until the bombardment was over.

Writing to Key’s son-in law in 1856 (over forty years later), Key’s brother-in-law, U.S. Supreme Court Justice Roger B. Taney, related that Key had told him that he had written the poem September 14th or 15th on board ship and finished at his hotel in Baltimore.  Taney credited another Key brother-in-law, Maryland Judge Joseph Nicholson, with promptly having the manuscript printed as a handbill.

Ferdinand Durang, along with his brother Charles, has been credited with matching the words with the tune as have others, including Nicholson and Key himself.  (Key had previously written another patriotic poem, When the Warrior Returns, which could be sung to the same tune.)  An illustration of a printed copy identified as the “first handbill” includes the notation:  “Tune: Anacreon in Heaven.”  Consequently, the oft-repeated story of the Durangs matching the words with the music at a Baltimore Tavern seems a bit of a stretch.  The Durang boys were in Baltimore at that time, both members of Harrisburg’s Dauphin Blues  militia, which had marched to York’s Penn Common to  unite with Captain Michael Spangler’s York troops.  Their father, John Durang, was in York at the time and recorded helping the soldiers make cartridges before they continued on to the defense of Baltimore.

There seems to be no doubt that the song was an instant hit.  It appeared a few days later in the Baltimore newspapers under the title Defence of Ft. McHenry.  The first publicly-advertised singing of The Star-Spangled Banner, probably by Ferdinand and/or Charles Durang, seems to have been at the Holliday Street theater in Baltimore in October 1814.  John Durang relates in his original memoirs, now in the Library/Archives of York County Heritage Trust, that the following June he opened his company’s 1815 touring season in York at Peter Wilt’s tavern (now 218 East Market Street).  That was likely the first time Yorkers saw and heard our nation’s anthem performed publicly.  He goes on to say: “The Star Spangled Banner was sung in many companies” that summer.  By 1816, Durang, already know for his fireworks displays, had created quite a production noting that: “I brought out The Attack on Fort McHenry with the bombardment of the British fleet to crowded houses.”

They may not have united the words and music, but there seems to be no doubt that “our” Durang family was certainly instrumental in familiarizing Americans with the song that officially became our stirring, if somewhat difficult to sing, national anthem in 1931.