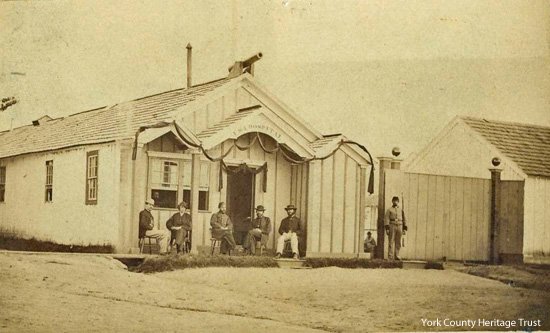 One of the largest Union Civil War hospitals opened on York’s Penn Common in June 1862.

Mary Cadwell Fisher authored lengthy accounts, for both Gibson’s (1886) and Prowell’s (1907) histories of York County, of the hospital that treated over 14,000 soldiers during the three years of its existence. Mrs. Fisher was in a position to know. She was one of the founders of York’s Ladies Aid Society, whose members were nursing sick soldiers even before the official hospital opened its doors. She and her colleagues kept up their care, even in the aftermath of battles such as the Wilderness, Cold Harbor and Gettysburg, each of which sent many hundreds of the wounded to the U.S. Army General Hospital at York.

Records show that only 193 of the patients died during the three year period, an amazing record to the credit of the treatment by Chief Surgeon Dr. Henry Palmer and his assistants, as well as good nursing and nutritious food. York County Heritage Trust Library/Archives has recently acquired a collection of Dr. Palmer’s papers. They will be part of an exhibit on York’s Civil War hospital, opening to the public on June 29 at 250 East Market Street, York.

For an overview of York’s Civil War hospital, see my recent York Sunday News column below:

One of the largest Union Civil War hospitals was opened on Penn Common (now Penn Park) in York in June 1862. For the next three years, doctors and nurses cared for 14,256 sick and wounded soldiers. Amazingly, only 193 of these patients died at the hospital.

Several factors contributed to the high survival rate. Even though the U.S. Army General Hospital at York received massive influxes of patients after major battles, many had already been stabilized at field hospitals or transferred from hospitals closer to the fields of battle, such as Washington, D.C. A sizable number of the patients sent to York had wounds of the extremities shattered by gunfire or they had limbs already amputated. The York surgeons often treated these patients “conservatively.” In other words, they didn’t rush to amputate, which could set the stage for massive infection.

The hospital was well run by Chief Surgeon Dr. Henry Palmer and the assistant surgeons, who numbered about 30 over the hospital’s three-year span. York’s Ladies Aid Society members helped with nursing, provided medical supplies and procured good food for the patients from generous citizens. Convalescent patients, not yet ready to be returned to fighting, also nursed and served as clerks, as well as manned the hospital post office; printing office and cabinet, carpenter, paint and tin shops.

York had been an assembly point for Civil War troops since the beginning of the conflict. They trained at Camp Scott at the old York County fairgrounds and on Penn Common. During the winter of 1861-62 the Sixth New York Cavalry occupied barracks on the Common. After they were ordered to move on, Assistant U.S. Quartermaster Putnam came to York in May to sell and remove the buildings. He found them to be sturdy and in good enough shape to convert to a hospital, initially accommodating 800 to 1,000 patients. Windows were cut out and ventilators installed on the newly refurbished roof. In a few weeks, the hospital, with long rows of movable cots about six feet apart, was ready.

Mary Cadwell Fisher, one of the nurses and organizers of York’s Ladies Aid Society wrote a comprehensive article on the hospital for Gibson’s 1887 History of York County. Her account, along with the Cartridge Box newspaper published at the hospital, provides us which much of what we know about its operation. Fisher dates the caretaking and nursing activities of the local women, as well as the production of bandages, clothing and supplies for the sick and wounded, back to April 1861, when York companies returned from railroad guard duty near Baltimore. By May 6,000 troops were at Camp Scott. The local ladies made sure the sick were cared for in private homes, and a temporary hospital was set up in the Duke Street school building.

The Penn Common hospital administration and staff took a holistic approach to treatment and rehabilitation. The soldiers had access to a library and to school sessions with English classes, and even some in German. The headmaster of the school, probably also a convalescent, reportedly had a Yale degree. Entertainment such as music, plays and lectures were presented and were open to the public. These programs were recognized as helping heal the soldiers mentally and physically.

Little did the U.S. Army, or the local citizens, anticipate how much the facility would be needed over the next three years. More ward space was constructed, and the Odd Fellows hall a few blocks away served as an annex for more patients from time to time, such as after the September 1862 Battle of Antietam, when bloody train cars of soldiers arrived directly from the battlefield.

The hospital was running smoothly by spring 1863. Then word came that an invasion of the north was imminent. Fisher relates that on June 15, 1863 almost all the patients, along with medical and commissary supplies, were moved across the Susquehanna River to Columbia under the care of Dr. Alexander Blair. They would stay there in a quickly fitted school building for several months. Dr. Palmer stayed behind with five patients that could not be moved. Palmer was officially captured when the Confederates arrived in York two weeks later, but was paroled.

After an occupation of York from June 28 to June 30, the Confederates were called to join General Lee at Gettysburg. On Saturday July 4 confirmation of a Union victory reached York, but so did the news of the carnage left behind. Forty wagons filled with supplies left York’s square by 3 p.m., and soon trains would be rolling in from Gettysburg, filled with wounded. The hospital was back in business, filled with the new casualties overflowing into tents on the Commons. Even though Dr. Palmer was reluctant to accept Confederate wounded from Gettysburg, some were cared for at Odd Fellows hall.

Soldiers continually returned to the field, were furloughed or discharged on disability, but more replaced them, transferred from other hospitals filling up from new battles. Up to 2,000 patients arrived in May and June 1864, many as a result of Virginia contests at the Wilderness and Cold Harbor–each issue of the Cartridge Box was filled with names of newcomers.

Comfort of the recuperating soldiers remained foremost. The interior whitewashed walls were decorated with flags and drawings. A train, operated by pulleys, moved food down the long tables. Eight hundred men could be rapidly fed at a time at each of the three seatings. A new chapel, built by convalescents with materials chiefly donated by townspeople, hosted religious services, a library, schoolrooms and public entertainment.

The hospital quickly emptied as the war wound down in the spring of 1865, with the last patients leaving in late July. The buildings were sold by the government and dismantled a few weeks later, leaving only the memory of the multitude of healings that took place on the site.

An article on The Cartridge Box will appear in the 2012 Journal of York County History, available September 2012.