York’s Bob Hoffman was an early promoter of bottled water 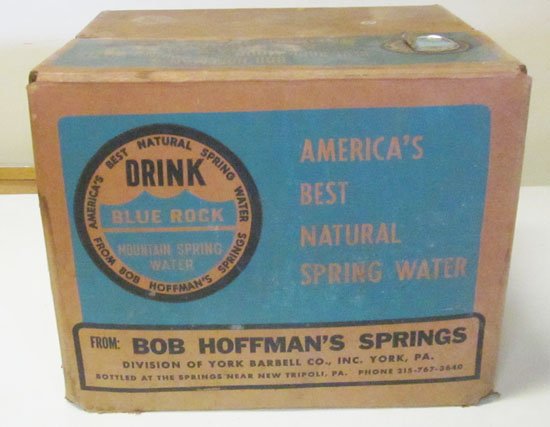 Weight lifter and founder of York Barbell Company Bob Hoffman (1898-1985) had strong opinions about exercise and nutrition to build and maintain a healthy body. I didn’t realize that he was a fairly early advocate of drinking bottled spring water.

Friend Dennis Kunkle always has an eye out for local history. He noticed that someone had packed their book donation for the York County Heritage Trust annual Book Blast (August 14-16 this year) in a sturdy carton labeled:

The carton originally contained six ½ gallon bottles. It gives the spring location as New Tripoli, Pa. A Google search reveals that there are still several water bottling companies in that area, including some national/international brands. In fact, there still is a Blue Rock Mountain Spring Water company, based in Allentown, less than ten miles from New Tripoli.

The date stamped on the top of the carton is January 4, 1974, before the mushrooming consumption of bottled water as we now know it. Today’s market seems to have been fueled by cheap methods of plastic bottle manufacturing and by marketing emphasizing purity, even when the product is just filtered municipal or well water.

“…Hoffman owned ‘a sizeable water empire,’ indeed ‘more springs and larger sprints than any individual in the water business.’ Bob had to be first in everything, even owning springs! …it was personal experience through which he appealed to consumers: ‘After years of drinking Blue Rock Mountain Spring Water, I feel like 40 million.’ Since Hoffman ate but one meal per day, he could not drink as much water at meals as others, so he drank it profusely at night. When at home reading magazines or typing letters, he might consume several quarts. Still expecting to live to the year 2000, he was sure that failure to do so would not come from lack of good drinking water. The profit motive notwithstanding, Bob’s recognition of the water marketing potential in North America anticipated Perrier by at least a decade.”

Me–I always have a glass pitcher or bottle of York Water Company water chilling in the refrigerator. That’s my favorite drink.