Yorkers travelled when it wasn’t so easy 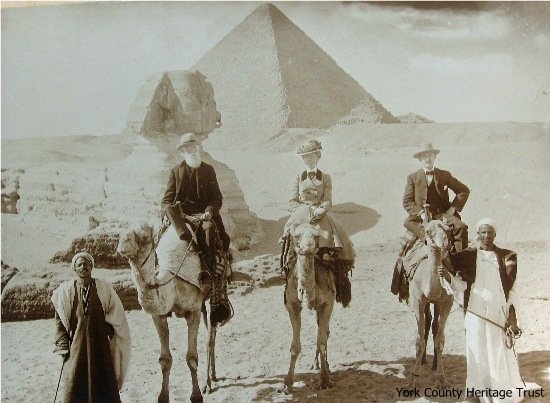 My recent trip to Egypt with a group from York County Heritage Trust reminded me of a photo in the YCHT Library/Archives collection of some former Yorkers who also went to see the Sphinx, pyramids and the other ancient sights.

The two men in the photo above are businessman Samuel Small, Junior and architect Reinhardt Dempwolf. The woman in the middle has been identified as either Frances A. Richardson Small (Samuel’s wife) or Helena Small Goldsborough (Samuel’s daughter). In trying to pinpoint the date of the photo, I found that Samuel Small made at least four trips to the region, one in 1889, one in 1904 and two in undetermined years.

According to a newspaper account of Helena’s wedding in 1908, Samuel gave the newlyweds a Persian rug, supposedly originally made for the Shah, that he picked up on one of his trips to the Middle East.

Spending a total of over 12 hours in airplanes to get to Egypt seemed plenty to me. I can’t imagine how long the journey by boats, trains, carriages and whatever other conveyances necessary would have been in the late 19th and early 20th centuries. My hat is off to the Smalls, Dempwolf and the other adventurers who explored the world when it wasn’t so easy.