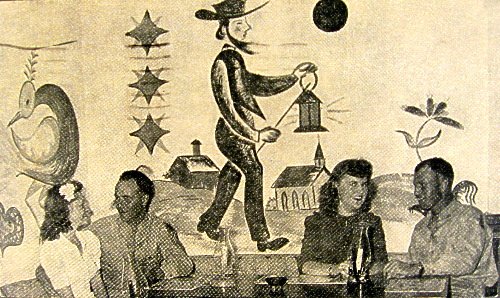 While researching an upcoming York Sunday News column on Walter Ziegler, a Yorker who was a World War II POW, I came across a leaflet about York USO (United Service Organizations) activities during September 1943. (Click here for fellow blogger Jim McClure’s posts on the background of the York USO.)

The York USO’s Pennsylvania Dutch Canteen, located at 153 N. Beaver St., was hosting Jimmy Schockley and his Orchestra for dancing on Saturday, September 18, and then serving an “Early Bird Breakfast” from 9 a.m. to 11 a.m. Sunday morning. There would be personal interviews over radio station WSBA from the canteen at 6:15 p.m. Sunday followed by a “Big Vaudeville Show” at 7:30.

They also offered ongoing outdoor and indoor sports as well as reading and lounge rooms and showers and pressing facilities. Servicemen and women could have a voice message recorded, which the USO would even mail home for them.

The postcard, from the collections of York County Heritage Trust, was sent, as you can see from the message below, to Staff Sgt. Henry J. Young. He had taken a leave of absence from his position as director of the Historical Society of York County to serve his country. Coincidentally, it was sent to him by local artist Margaret Sarah Lewis, Walter Ziegler’s aunt. 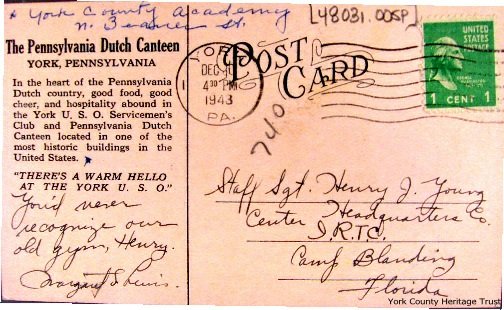 Click here for more on York’s USO.
The Northern York County Historical and Preservation Society recently held a USO-style dance Saturday, August 13 at the Dill Tavern restoration in Dillsburg to cap off their full day of World War II-related events . Click here for the York Daily Record story on the activities. Look for similar events in the future.