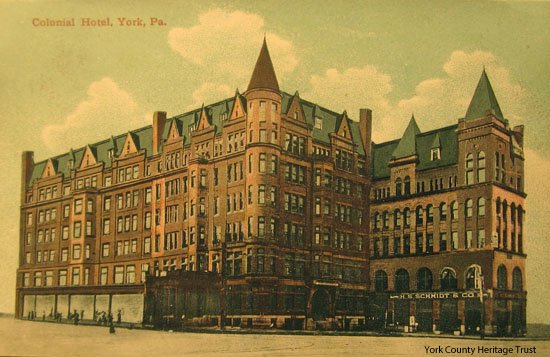 (When looking at early 20th century postcards to illustrate this post, I noticed that many of them include both the Colonial Hotel and the Rupp Building, making the hotel seem even more massive. Note the “day” view above has been changed into the “night” view below with the addition of a moon and dark clouds.)

The big yellow brick building on the southwest quadrant of the square in York, Pa. has been a landmark for over 100 years. The hotel building survived a major fire in the 1940s that gutted the top two stories. Many people remember the People’s Drug Store, occupying part of the first floor mid-20th century, as a place to grab a quick lunch, pick up cosmetics and many other items besides medications.

Some of the roofline has been modified, and I believe much of the building has been divided into condos, but it is still an impressive pile of bricks. Building the structure was a major endeavor in the 1890s, attracting the interest of residents, as shown in this article from the May 25, 1893 York Dispatch, shared with me by York County Heritage Trust Director of Library and Archives, Lila Fourhman-Shaull:

“THE NEW HOTEL
Why Not Name It “Continental

The Continental Congress met in York during a portion of the years 1777 and 1778 occupying the old court house in Centre Square, making that portion of York City historic ground. As the hotel company is looking for a suitable name for the new hotel, why not call it ‘The Continental.”

Located on the square so near to the very spot where the patriotic Continental Congress convened, what more appropriate name could be had or do greater honor to York. It would help to commemorate the great historic interests clustering around our city and Centre Square in particular. The name ‘Continental’ would be a reminder of those days that tried our patriotic fathers, and to visiting strangers would open the story of the days when Congress, driven from Philadelphia, found a hospitable home in good old York, near the spot on which the new hotel stands.

We do not appreciate as we should the national historic interest York has, and we can conceive of no more appropriate name for the new hotel than ‘Continental.’ Let the managers consider this subject while hunting for a name, and it seems to us that the whole surroundings and their hallowed associations would suggest this name as the most fitting and appropriate.”

Even in those days, there were those who felt York’s history was not getting its proper respect.

The owners chose the Colonial Hotel name, but the square on which it sits, the former Centre Square, has been called Continental Square for nearly a hundred years now. It is speculated that the square name change came about in the 1920s, about the time of the huge celebration of the 150th anniversary of Continental Congress meeting in York. Neither the former hotel nor the square itself evokes images of 18th century York County, but our history still does lurk, however subtle. 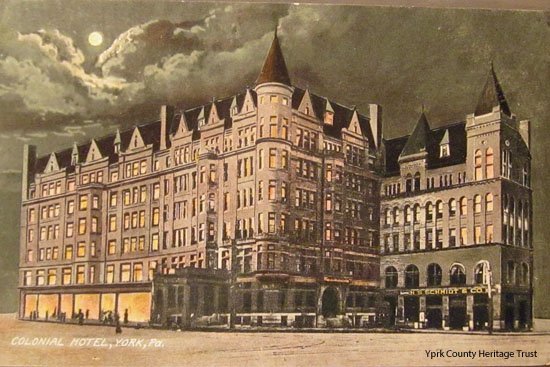 Here is a link to my previous post on a 1940s brochure describing the York downtown hotels.