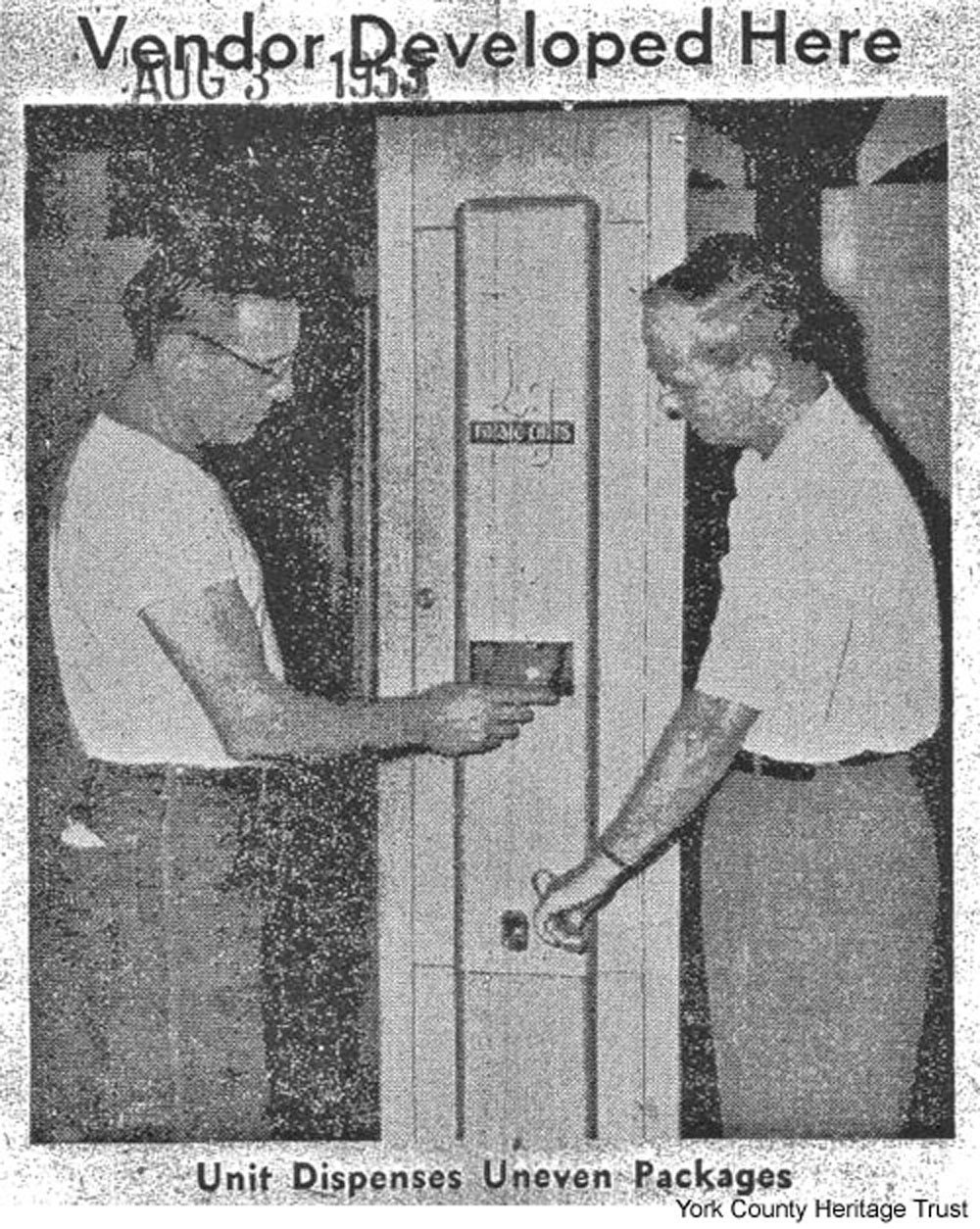 Wouldn’t you know it? As soon as I think I’m done learning about local potato chip history, something else pops up.
Did you ever think about who first came up with dispensing the little bags of potato chips and other snacks in coin operated machines? Well, guess what:
According to the August 3, 1953 York Gazette and Daily, the first successful machine was developed by staff of the El-Ge Potato Chip Company, whose York County plant is now Frito-Lay.
By the way, I did call the big Frito-Lay plant in West Manchester Township and they do make all flavors of Lay’s potato chips here, as well as all flavors of Doritos. In fact the Frito-Lay website says that the York County plant produced 21 million pounds of potato chips last year.
The vending machine article reads:

A locally-developed coin vender, believed to be the first capable of dispensing packaged good in bags such as potato chips, popcorn and other delicacies is now on the general market.
The device was developed at the El-Ge Potato Chip company here by Leonard Gillespie (above right) company president; Russell Wilson, vice president and production manager; Russell Miller (left) of the maintenance department; and Paul Long, retired superintendent of the York Corrugating company metal shop.
Patent is pending on the device by production and sales rights have been turned over to the Wright Machinery corporation, Durham, N.C., which began building the machines a few weeks ago.
The coin vendor was perfected after two years of experimentation.
Because of their uneven rounded shapes, bags of chips, shelled peanuts, pretzels, popcorn of cookies cannot be stacked in a vending machine. The Hav-A-Bag machine consists of a series of clips evenly spaced along a chain cable. Bags are hooked to the clips which are released through a chute when they strike a metal wedge.

The Hav-A-Bag machine must have been a success. Less that two weeks later, Billboard magazine reported that Tastychip of Brooklyn, N.Y. had just ordered 100 of the vendors from Wright Machinery at $229 each.
One small side note–I have noticed Miss Vickie’s, an unfamiliar (to me) brand of chips recently, so I tried some yesterday when I had lunch at the Smithsonian’s National Museum of American History. Not bad for a crunchy-type chip. They are a Frito-Lay brand too. Mine were made in Texas, which I found out through Frito-Lay’s nifty Chip Tracker feature.
Click below for previous potato chip posts.
Top Hat chips.
Utz not to be sold after all.
Martin’s.
Utz of Hanover.
Bon-Ton /Bickel’s.
Senft’s.
El-Ge/Eagle Snacks/Frito-Lay.
Charles Chips.
Click below for more York County inventors.
Charcoal heated iron.
Artificial Christmas tree
Dowdel’s bedbug-proof bedstead.
Anstine’s threshing machine.
Frey’s flying machine.
Hanover fires.