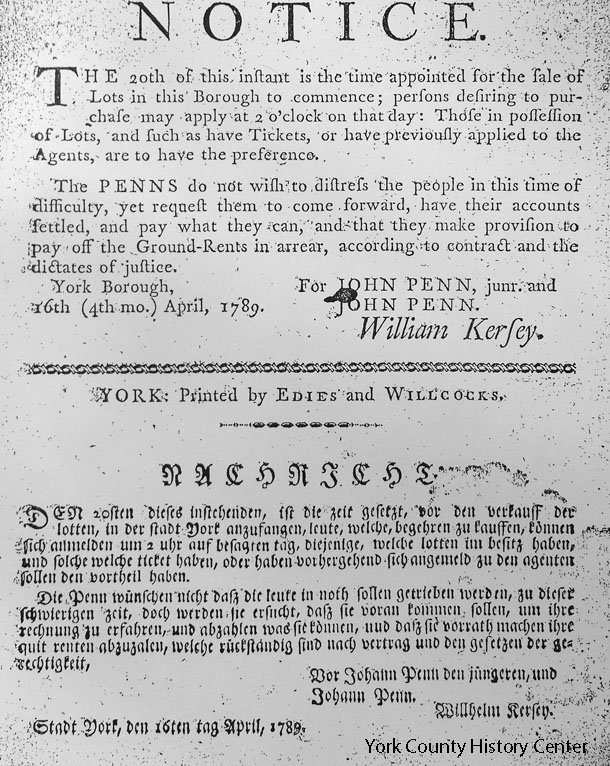 The bilingual notice above (transcribed below) illustrates two points.

One is that, because the great majority of 18th century York County residents were from the Germanic lands of Europe, official notices were printed in German as well as English, as shown by this broadside. It was printed by Edie and Willcocks, who printed anything that needed to be printed. Starting in 1789, they also published The Pennsylvania Herald and York General Advertiser newspaper.

The other thing that strikes me as different is how politely William Kersey, acting an agent for the Penns, requests that York lot buyers pay up. It reads:

The 20th of this instant is the time appointed for the sale of Lots in this Borough to commence; persons desiring to purchase may apply at 2 o’clock on that day: Those in possession of Lots, and such as have Tickets, or have previously applied to the Agents, are to have the preference.

The PENNS do not wish to distress the people in this time of difficulty, yet request them to come forward, have their accounts settled, and pay what they can, and that they make provision to pay off the Ground-Rents in arrear, according to contract and the dictates of justice.

When new lots were laid out in a town, there was often a lottery held to see who could purchase which lot. Those are the tickets referred to.

The time of difficulty refers to a rather depressed United States economy, some say brought on because the federal government was too weak under the Articles of Confederation. A stronger government emerged with the new Constitution, but that had gone into effect in March 1789, only a month before the above notice was printed.

Finally, the date is given as both April and 4th month. That is probably because William Kersey was a Quaker and the Quaker practice was to use numbers for days of the week and months of the year, reportedly because the days and most of the months were named for pagan gods.

This link will take you to a former post showing that York County was bilingual well into the 19th century.

Click here for another example of York County’s bilingual past.