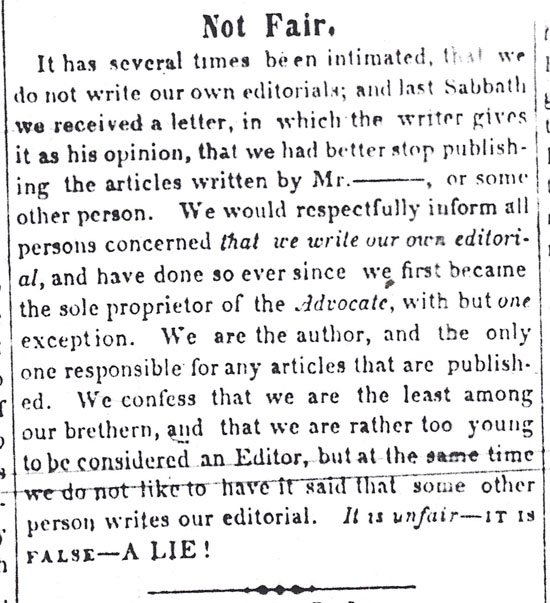 Newspapers of the past were strongly partisan. Henry F. Thomas, Editor and Proprietor of York’s People’s Advocate plainly showed his Whig colors. He published very few favorable things to say about the Democrats, referring to them as Locofocos, a rather derogatory term.

No matter how acerbic his comments about others, Thomas became incensed when he felt he was being unfairly criticized himself. He defends his integrity and youth in the item below from the January 22, 1850 People’s Advocate. If we assume he is the same Henry F. Thomas (1827-1889) who is buried at York’s Prospect Hill Cemetery, he would have been a month shy of his 23rd birthday in January 1850. He asserts:

Not Fair
It has several times been intimated, that we do not write our own editorials; and last Sabbath we received a letter, in which the writer gives it as his opinion, that we had better stop publishing the articles written by Mr.______, or some other person. We would respectfully inform all persons concerned that we write our own editorial, and have done so ever since we first became the sole proprietor of the Advocate, with but one exception. We are the author, and the only one responsible for any articles that are published. We confess that we are the least among our brethren, and that we are rather too young to be considered an Editor, but at the same time we do not like to have it said that some other person writes our editorial. It is unfair—IT IS FALSE—A LIE!

In the same January 22, 1850 issue of the Advocate, Thomas did at least acknowledge a rival, York Gazette editor Adam Glossbenner, upon his appointment as Sergeant-at-Arms of the United States House of Representatives. Thomas wrote:

Sergeant-at-Arms of Congress
The House took one more step towards a complete organization, on Tuesday last, by electing ADAM J. GLOSSBRENNER, senior editor of the York Gazette, as Sergeant-at-Arms. Mr. G. is a clever fellow, and knows exactly how to take a Yorker by the hand when he meets him from home. And since a Locofoco must fill the station, we are glad that a York Loco has been elected, and that the choice has fallen on MR. GLOSSBRENNER. He will no doubt make an efficient and obliging officer. This much we can say for our neighbor.

Click here for more on Thomas and his paper.