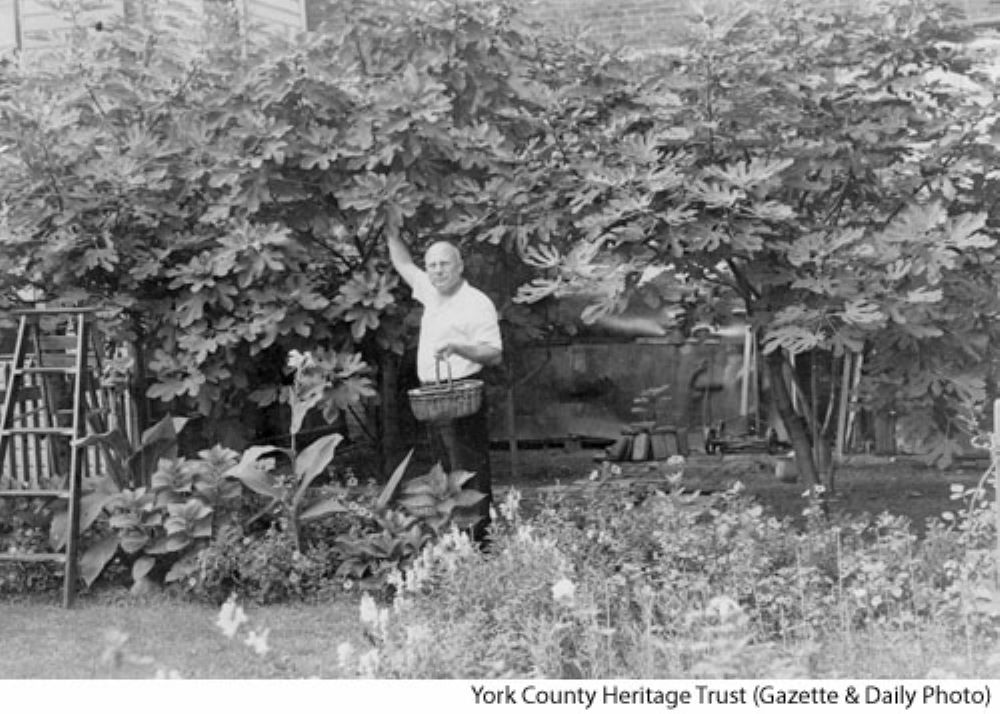 Fig orchard on East King Street
I came across the striking photo above while looking for something else on the database at the York County Heritage Trust Library/Archives. Volunteers are loading images from the vast photo collection into the database so that they can be easily viewed without handling the original photographs. I was surprised to see the lush, tropical fig trees growing in York County. How Mr. Cicero accomplished the feat is explained below, transcribed from the September 6, 1946 Gazette and Daily.
Check out this link to Mr. Cicero’s Sicilian home town, Cattolica Eraclea. It is still only about 5,000 inhabitants, but it sounds like a great place to visit with lots of history, including a significant archaeological site of Greek ruins. By clicking Local Family Names on the site and doing a search, I found that there are about six people in Cattolica Eraclea now with the surname Cicero. There is also a list of families there with over 100 people per surname. There are some familiar local and national names on that short list.

“‘HOME-HUNGRY FOR FRESH FIGS’–That was the reason given to a reporter by Ben Cicero when asked what made him grow the tropical plant in his garden at 265 East King street–believed to be the only fig orchard in this area.
The 55-year-old maker of special shoes came to York in 1913. About 15 years ago he got a yen for the fruit grown in abundance in his native Sicily (Cattolica Eraclea). He imported young plants from California, Spain and Italy and now has seven trees in his 23 by 50 foot garden. It took three years for the young trees to bear fruit.
From November through May the trees are kept in a hot-house built around the garden; the rest of the time, particularly in August and September, Cicero prays for moderate weather.
Mr. and Mrs. Cicero share their annual crop with friends and neighbors. Asked what he does with what’s left over, Mr. Cicero said, ‘no such thing like that.'”

There is no longer any 265 East King Street. The property is part of a small parking lot for York County Heritage Trust staff and volunteers. In fact, my car was probably parked on the former site of the home while I was researching the story.
In previous posts I’ve covered York County apples and cherries, but I still haven’t seen a York County fig. Is anyone growing them here today?