York Little Theatre has offered entertainment and education since 1933 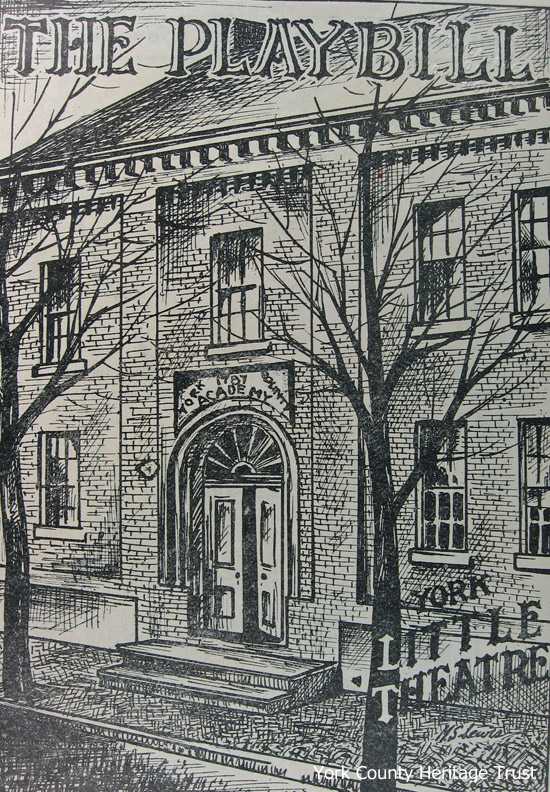 Since inception in 1933, members of York Little Theatre have put on just about any Broadway play you can think of. The early sixties were break out years for musicals, with the first YLT musical Knickerbocker Holiday, soon followed by Can Can, Pajama Game and Damn Yankees.

For years YLT offices were at the old York County Academy building, shown above in the artwork by local artist Margaret Sarah Lewis on an early Playbill. For the first 20 years, most performances utilized the auditorium at Phineas Davis Junior High School. There were a few other sites considered for a permanent home, as outlined below in my recent York Sunday News column, before settling in at the current facilities on South Belmont Street.

I mentioned some of the earlier talent that came out of York Little Theater and went on to fame, including Mildred Reineberg (now Sister Mary Clare), on whom I had done an earlier blog post. Fellow columnists and bloggers Jim McClure and Gordon Freierich have also touched on the subject.

I was delighted to see a recent “Letter to the Editor” in the York Daily Record from Rebecca Frey, a former Yorker, who is now a successful costume designer in New York, working with such shows as Saturday Night Live and Late Night with Jimmy Fallon. She points out that York Little Theatre is still nurturing talent, as it did for her not too many years ago. Can some of you share stories of friends, relatives or yourselves, anyone got their theatrical start with York Little Theatre and now has a show business career?

See below for my recent York Sunday News column on YLT:

The country was in a deep depression in February 1933 when an optimistic group of Yorkers got together to form a community theater. Sixteen one-act workshop plays were performed throughout the community by year’s end, and on Dec. 14, 1933, York Little Theatre presented Lady Windermere’s Fan, its first full length public play.

Quickly progressing, the first full-time director, J .F. Foster, was hired in January 1934, and York Little Theatre was soon chartered as a non-profit organization. The first children’s play, Aladdin and His Wonderful Lamp, directed by Helen Miller Gotwalt, opened in August 1934 as a benefit for the York Recreation Commission playground fund. YLT was sponsored early on by the recreation commission as a self-supporting partner, sharing the commission’s offices at the old York County Academy building, 153 North Beaver Street.

The Great Depression lingered, but Yorkers embraced the opportunity to forget their troubles for a while and be entertained. Productions were presented in rented auditoriums, usually at Phineas Davis Junior High School.

YLT attained a milestone in 1938-39 with its first Shakespeare staging, A Midsummer Night’s Dream. The first choreographed show was performed that season, and total 1938-39 attendance reached a record 3,492.

The 1940s arrived with the depression over, but the country was soon at war. York Little Theatre carried on, with more women now taking on many of the back-stage tasks. With the shortage of men on and off stage, one of the 1941-42 season’s plays was Clare Booth Luce’s The Women, an all-female cast. YLT did skits for local industry to build morale and entertained servicemen at area camps. Three extra performances of major plays benefited the 6th and 7th War Loan drives in 1944-45. After the war, pride in servicemen and servicewomen continued–many newspaper announcements of leads in post-war plays featured photos of the individuals in their uniforms.

With World War II over, York Little Theatre was eager to go the next step–purchase its own home. In September 1945 YLT’s board approved the purchase and renovation of St. Andrew’s Parish recreation hall in the 1100 block of East Prospect Street. The sturdy cement block and steel building had previously served as the York Safe and Lock Athletic Club. A fund raising flier exhibited an artist’s conception of the renovated building, spacious enough for a large stage, a fly gallery and expansive seating. Offices and rehearsal rooms would occupy the second floor. The goal of $25,000 wasn’t met in time, and the theater sold the building in 1948 for $15,000, reportedly $4,000 more than it had paid shortly before. (It is presently the home of Mt. Moriah Baptist Church.)

While still renting the Phineas Davis auditorium for productions and continuing to look for a permanent home, YLT leased more of the York County Academy building. This precipitated a small scene in October 1947 when members of the 94-strong Junior Optimists, a club for boys aged 8-16, picketed because YLT would be taking some space the boys club had been using for free.

The Gazette and Daily reported more YLT drama with a March 31, 1948 headline: “Little Theatre Director Quits in Policy Tiff.” Miss Arriminta Gully, director of five years, wanted open community casting. Her opposition, some individuals on the board and from general membership, “thought people from a dependable nucleus should be cast first, then filled in with newcomers.” Fifty members, after a “lively three-hour discussion,” sent four men to her house at 11 p.m. to relay “unlimited confidence,” but she told them she was still leaving for New York early the next morning. Gully did come back to direct State of the Union, the final show of the season, but even an offer to increase her salary from $1,600 to $2,000 couldn’t lure her back to stay.

Trying again for their own home, plans were made to purchase a lot on McKenzie Street, opposite Jackson school, in 1949. Architect J. Alfred Hamme drew up plans for a single-story building with a 400 seat theater, dressing rooms and property rooms, a $50,000 project. The Junior Service League shortly signed on, agreeing to help raise funds in return for a larger building to be shared by both organizations. The project cost escalated to $90,000-$100,000, and never came to fruition.

In July, 1953 York Little Theatre signed a lease-purchase for the Elmwood Theatre, a former motion picture theater. YLT opened the 1953-54 season at the Elmwood, finally in its own home. According to the 1960 booklet We’ve Come a Long Way, YLT took title to the Elmwood May 16, 1956. The theater group continued showing films for a while, but gave that up for more traditional fund raising, including the YLT steak sandwich stand at the fair, now a tasty fixture for over 50 years..

After some ups and downs in their nearly 80 year history, York Little Theatre seems to be doing well, recently announcing the dozen plays for its 2012-13 season. Once again there is a nice mix of main stage, children’s and studio presentations.

From Jane Eyre (1937-38) through The Man Who Came to Dinner (1949-50) and Othello (1959-60) up to York native Ken Ludwig’s Leading Ladies, presented a few weeks ago, many Broadway and classic plays have been given new life through local talent. Sometimes the talent nurtured at York Little Theatre becomes widely known. A 1952 York Sunday News article notes some early YLT alumni successes: Cameron Mitchell went on to star in Death of a Salesman and more on Broadway and film and on television; John Baer appeared in movies and played the television series lead in Terry and the Pirates. Scotty Fried was on Broadway in Oklahoma; Mildred Reineberg performed in movies, summer stock and on the radio and Kay Wilt acted for the New York Theatre Guild as well as in radio. Who knows what new talent is now developing? In the meantime, we can sit back and enjoy the show(s).