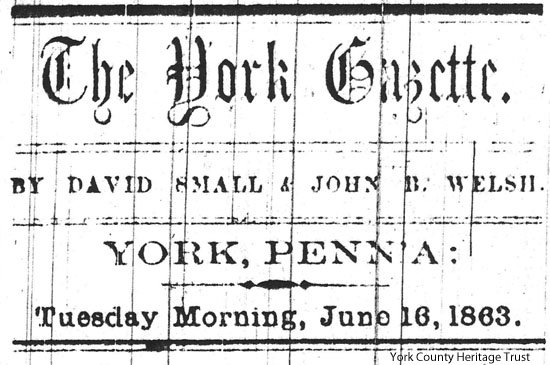 In a post last week I transcribed an article from the June 9, 1863 York Gazette explaining how the Enrollment Act/Conscription Law/Draft would work. The June 16 Gazette carried two smaller articles with further clarification:

The Enrollment Act (datelined Washington)–It has been determined that while all persons coming within the provisions of the act for enrolling and calling out the national forces are to be enrolled, nevertheless under the first enrollment those who were in the military service at the time the act went into effect–third of March last–are not to be enrolled in that class which is subject to the first draft. Those of the second class are not to be called out until those of the first class shall have been exhausted.

In other words, those who were in the service on March 1 would be the last to called in this draft.

The Conscription Law–The Conscription Law is receiving a clearer interpretation than at first. The $300 can be paid or a substitute procured, and, if accepted (the acceptance depending altogether upon physical ability) it exempts the person drafted from again being called upon during the period for which he is drafted; but if $300 is paid instead then the person is liable to be again taken upon any subsequent draft, and the President can order a draft as frequently as he may deem necessary–Express [perhaps the Lancaster Evening Express].

According to measuringworth.com, 300 1863 dollars would be worth around $5,660 today in buying power for everyday goods (using the Consumer Price Index). That would not have been an insignificant amount to a laborer or farmer in 1863.

Here is a transcription of the Conscription Act of March 3, 1863.