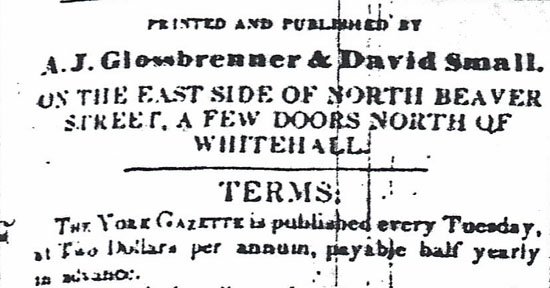 Considering that the four page newspapers of the early to mid-nineteenth century had at least one full page of advertisements, I was surprised to find out how expensive they were when compared with the subscription price of the newspapers. The following terms for subscriptions and ads are from the August 16, 1836 York Gazette:

PRINTED AND PUBLISHED BY
A.J. Glossbrenner & David Small,
ON THE EAST SIDE OF NORTH BEAVER STREET, A FEW DOORS NORTH OF WHITEHALL.

THE YORK GAZETTE is published every Tuesday, at Two Dollars per annum, payable half yearly in advance.

No subscription discontinued except at the option of the Editors, until all arrearages are liquidated.

A failure to notify discontinuance at the expiration of the period subscribed for, will be considered a new engagement.

TERMS OF ADVERTISING:–One dollar per square for three insertions—twenty-five cents per square for each subsequent insertion. On all advertisements exceeding three squares, and on all inserted for a longer period than two months.

As for the location of the Gazette office at that time, Whitehall refers to the hotel later known as The National House on the northeast corner of Market and Beaver Streets.