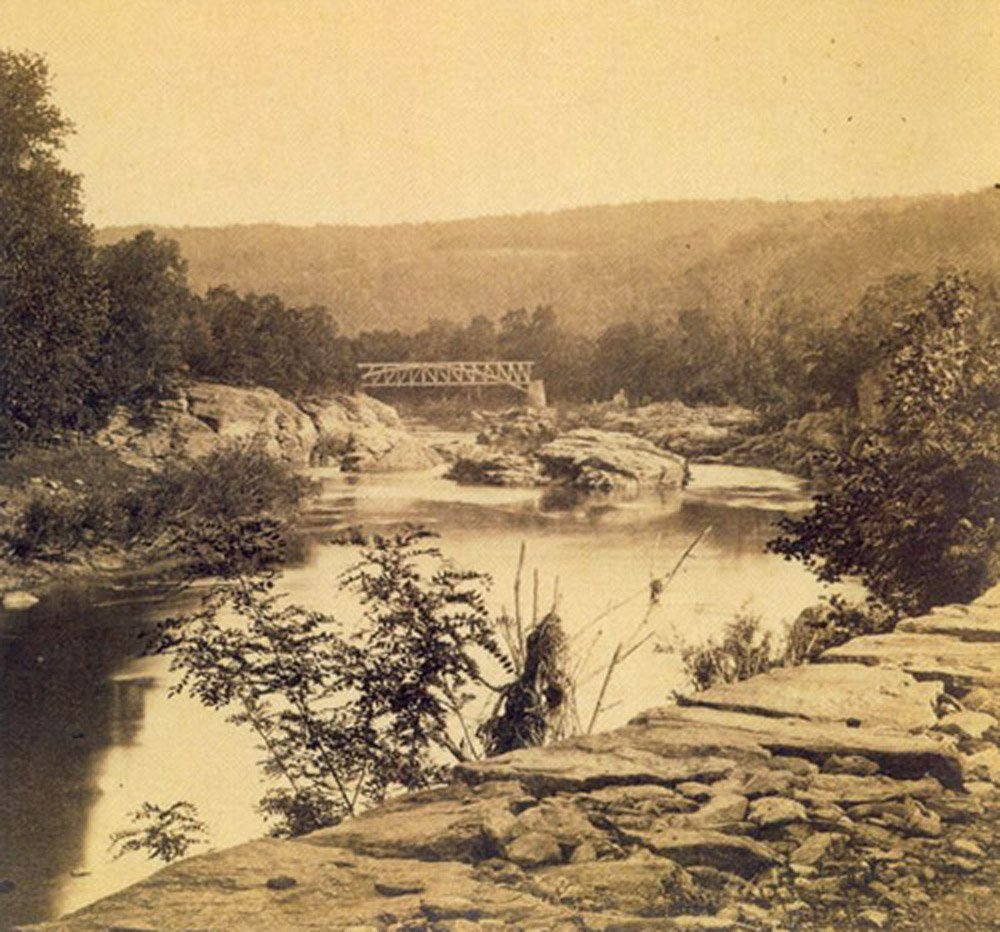 Residents of “the lower end” of York and Lancaster counties thought they could beat winter weather in the 1850s by building a bridge across the Susquehanna River at York Furnace.
The Lancaster Examiner of November 20, 1855 celebrated the opening of the bridge. The paper said that the York County people of Fawn, Lower Chanceford, and Peach Bottom would no longer be cut off from commerce in the winter, when the Susquehanna and Tidewater canal was closed and roads were bad to York. Now they could easily get to Lancaster to do their buying and selling.
The York Furnace bridge was to be an integral part of a state road system stretching across four counties from Gettysburg to Chester County.
That very weather they were trying to bypass was the final nemisis of the bridge. The wooden bridge across a narrow part of the Susquehanna was no match for first, wind, and then ice, that came roaring down the river.
See my recent York Sunday News column below for the story of the ill-fated bridge at York Furnace. 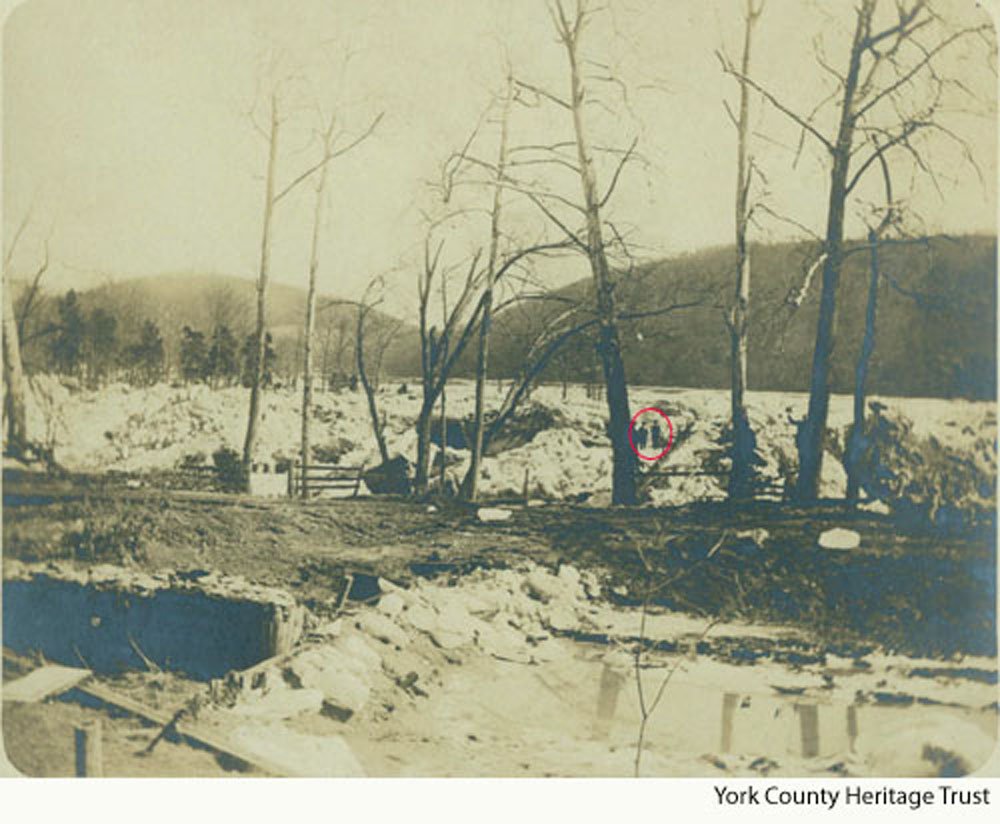 This photo may show the ice that carried away the remaining bridge piers in the early 1900s. The red circle marks men standing on the ice, giving you an idea of the size of the ice blocks.

Did you know there was once a wooden toll bridge across the Susquehanna at York Furnace? It was part of a planned major link that would connect southern Lancaster and Chester counties to York and Adams counties, also providing another route to Baltimore.
York Furnace was a bustling community in the 1850s with a working iron furnace, weighlock on the Susquehanna & Tidewater Canal, store, hotel, warehouse and river wharves. Some of the ore for the furnace came from Lancaster county and easier access was wanted for raw materials and finished goods from both sides of the river.
In 1851, the York Furnace Bridge Company was authorized by an act of the Pennsylvania General Assembly to issue stock at $50 a share. The president of the company was John Bair, proprietor of most of the enterprises at York Furnace. Bair was originally from Lancaster County, as were many of the other people with interests in the bridge.
There would be two spans across the channels. The one from the York County shore to Furnace Island (also known at times as Bair or Urey Island) would have one abutment and one pier. That side would also include a bridge across the canal. The wider channel from the island to the eastern shore would have one abutment and four piers. Six hundred additional feet of bridge would cross the island between the two open water spans. The bridge would stand 40 feet above the low water mark and 13 feet above the highest known water mark at that time. The contractors were John Black and Jacob Huber. It was to cost $40,950 and be finished in 15 months.
An original specification sheet, from the R.C. Bair file at the York County Heritage Trust Library/Archives, stipulates placement of piers and abutments on solid rock. The rock was already exposed in the channels and the island and shore lines were to be excavated to the rock base. The five river piers were specified to each be 25 feet long at the top, with thicknesses of 8 to 9.75 feet. These piers were each to be extended by a conical ice breaker fortified by bolted-on one-foot-square timbers to protect against ice and floating timber. The wooden truss and arches built on top would allow a clear 20 feet wide roadway inside. Flooring in these sections would be two courses of two inch planks for a total thickness of four inches.
The island piers could be constructed of slightly smaller stones, with each pier measuring 23 feet long and four feet thick. These piers would be 30 feet apart from center to center, rounded on both ends, some possibly having ice breakers. The wooden part of the island section would have a base of 8 by 15 inch stringers. Each stringer, 30 feet in length, would be laid pier to pier. The three inch plank floor spiked to the stingers would also leave a roadway 20 feet wide.
A contemporary newspaper article said the bridge, located 18 miles from Lancaster and 28 miles from York, would be largely used by three iron works: Colemanville and Martic Forges in Lancaster County, and York Furnace in York County.
The persons interested in the bridge had more in mind than just servicing iron works. In 1854, Pennsylvania Act #996 appointed three commissioners to lay out a State road from Gettysburg by way of Hanover, Shrewsbury and York Furnace Bridge to intersect the State road leading from McCalls’ to Parkesburg, at or near the Buck tavern. Citizens on both sides of the river wanted easier commerce between the southern parts of counties from Chester to Adams and also another access to Baltimore markets.
I’m not certain what happened with the road. An undated petition, signed by John Bair and others, protests a proposed bill that would repeal the authorization of the State road from Gettysburg to the Buck. The petitioners said the bridge was almost completed and it would become a thoroughfare through the southern parts of the counties. If you look at a present day map, you can travel by state roads from York Furnace to Gettysburg ( 425, 851, 216, and 116). It doesn’t seem much like a thoroughfare to me, but perhaps that is because the link across the river is missing.
The nearly completed bridge was opened in October 1855. On April 5, 1856 the strongest wind storm known up to that time blew down the four spans across the eastern channel. They were carried down river, but the contractors retrieved the timbers and started rebuilding. It was completed, some say to the last few planks, when, in early February of 1857, a severe ice flood destroyed it and took it away.
Two months later, the stockholders decided not to attempt another reconstruction. They abandoned it to the principal creditors, contractors Huber and Black. At the time the contractors said they might rebuild, and in 1857 the Pennsylvania General Assembly authorized rebuilding, allowing Lancaster County to contribute up to $10,000 and receive shares of York Furnace Bridge Company stock in return.
The bridge was not rebuilt then, nor was it in 1905 when the York Furnace Bridge Company again received a charter to build another bridge at the same spot. It was about that time that another ice freshet took away the original piers. Perhaps that was enough to discourage any further building schemes. Plans were also in swing by then to build a dam and power plant not far down the river at McCalls’ Ferry, which would raise the water height.
Southern York and Lancaster counties would not be physically connected until the completion of the Norman Wood Bridge in 1968, over 110 years after ill-fated bridge at York Furnace.

Click here for a recently discovered photo of the York Furnace Bridge.
Click on the links below for more on the Susquehanna River:
Latrobe map of the lower Susquehanna.
New bridge at Wrightsville after Civil War.
U.S. capital could have been on Susquehanna.
The dam below York Furnace.
And weather problems:
Rain strands fairgoers.