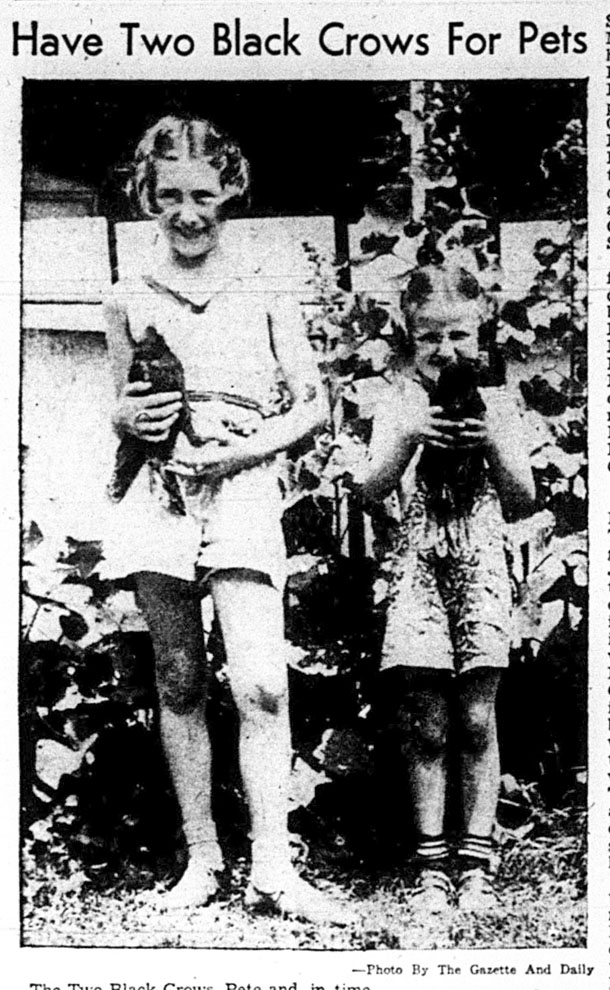 The July 7, 1941 Gazette and Daily shows a picture of two cute little girls holding their pet crows, Jim and Pete. Judging by the length of the detailed article, the reporter was quite taken with them.

The two girls, Patricia and Dolores, and their parents, Mr. and Mrs. Joe Selak, lived at 525 Cleveland Avenue, York. Found in Baumgardner’s woods by friend, the crows, estimated to be about six weeks old, were already about a foot long. The Selaks hand-fed them hamburger, milk and bread and soaked corn.

According to the story, Jim was friendly with everyone and Pete more standoffish. They were being taught to talk, with Pete doing better. Pete wandered a bit, having a run-in with a dog at nearby Penn Park before being rescued by a friend. Because of their relatively large size, cats didn’t seem to be a problem. The pair stowed away “any bright object they can get their beak on,” moving the stash if discovered.

The crows amused workers at nearby cigar factory. The article indicates that they will be allowed to go back to the wild if they care too, but it sounds like the family was happy to have them for pets for the time being.

There is a federal law that prohibits private individuals keeping birds like these at pets without a permit, which is rarely granted. It seems to have been in effect long before 1941, but the family and the reporter obviously didn’t know about it. I wonder if a game warden came calling after the article appeared.

(Baumgardner’s Woods is in the vicinity of Penn State York off Rathton Road.)