York Fair during wartime—part one 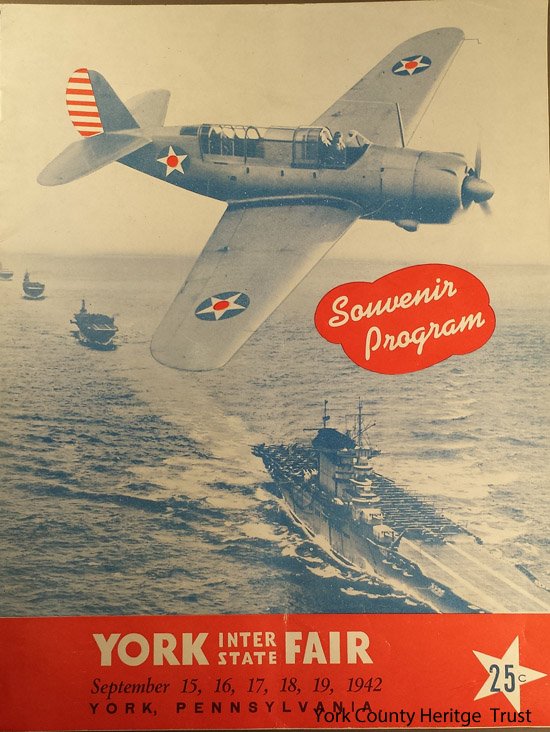 Everyone in York County probably realizes is it just about time for the York Fair again. Wondering how World War II affected the fair, I pulled a 1942 York Fair program from the York County Heritage Trust files.

Samuel S. Lewis, who was also serving as Lieutenant Governor of Pennsylvania at the time, was also the President and General Manager of the fair. His message explained the wartime position of the fair’s administrators. It reads:

The first concern of the management of YORK INTER-STATE FAIR at this time is how best to serve our country in a great national emergency. YORK INTER-STATE FAIR is a public institution devoted to instruction and entertainment of the people of southeastern Pennsylvania and adjacent Maryland. Under this policy is has grown in 91 years from a modest beginning to its present position as the foremost agricultural and industrial exposition in the Eastern United States. York Inter-State Fair is so closely linked in tradition and spirit with the historic city of its location that it has quite appropriately undertaken, through handsome bronze memorial tablets, to perpetuate the patriotic memories of a liberty-loving community.

The easiest course for any Fair Association in a time like this would be the closing of its gates until conditions again have stabilized. This would be the immediate action of the management of the YORK INTER-STATE FAIR, should the Federal Government direct discontinuance in the public interest. Up to this time, there has been no such instruction. Left to its own decision, the management of YORK INTER-STATE FAIR has concluded that the best interests of our country and of our patrons will be served by continuing in war, as in peace, to do what we may to promote the advancement of agriculture and industry in an area rich in both of these essentials to victory, and at the same time provide that relaxation so necessary to sustaining public morale.

So the fair went on, but that we were a nation at war was not forgotten. One of the things to see listed in the program was the York Safe & Lock War Weapons Exhibit under the grandstand. 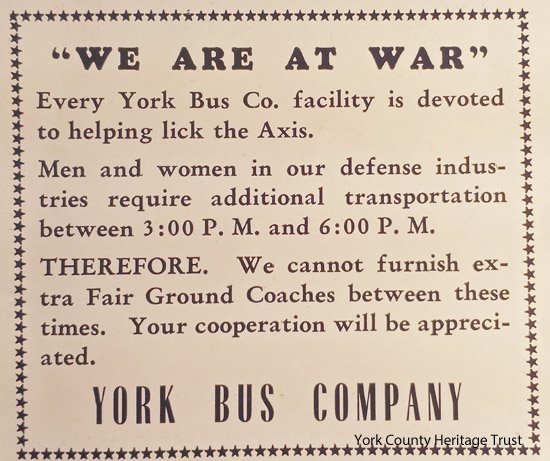 The York Bus Company also advertised in the program that there would be no extra York Fair buses between 3 p.m. and 6 p.m., when the defense workers needed their transportation, and a scrap company advertised the need for “scrap iron, metals, rags, etc.” for defense.

The nightly grandstand show was an appropriate Let’s Go America: A Patriotic Musical Spectacle. More about that show and the other entertainment in my next post.