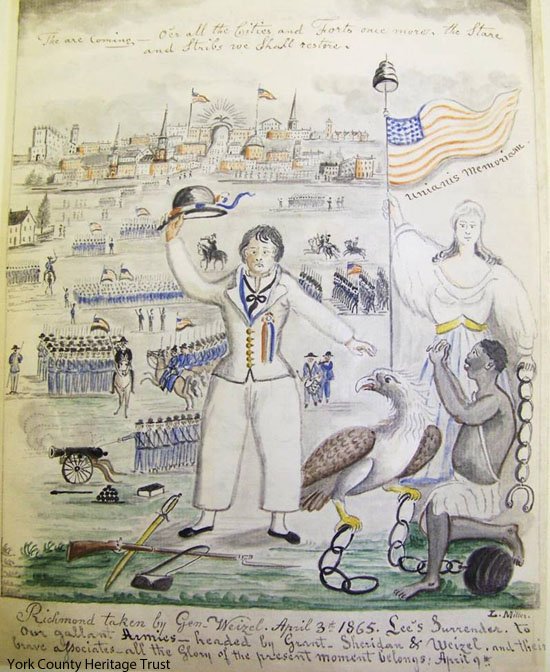 Folk artist Lewis Miller, a York native, had relatives on both sides of the Civil War. He and his brothers and sisters grew up in York, but in adulthood, three of his brothers settled in Virginia. Miller left a number of watercolor drawings depicting his view of the Civil War. There is no doubt that his sympathies were with the Union.

Some of the instances, such as the marching of the companies of local men that were to become the core of the 87th Pennsylvania Volunteers from training at Camp Scott to the York railroad depot, were probably witnessed by Miller himself.

Others of the Civil War drawings were surely put together from newspaper accounts and illustrated periodicals, such as Harper’s and Leslie’s. Whatever the inspiration of drawings, such as the one above, Miller shows his patriotism and his clever use of symbolism to get the message across.

Note the eagle holding part of the broken chain in each claw and the thankful former slave in front of Liberty, who holds another chain with what is probably a collar that no longer restrains.
A sea of blue uniforms floods the foreground with the stars and stripes flying high over the city in the background. The rifle and sword have been laid down.

“The[y] are coming—o’er all the Cities and Forts once more. The Stare and Stribs we shall restore.” [Even though well educated, Miller sometime wrote with a Pennsylvania German accent.]

Also:
“Richmond taken by Gen. Weizel. April 3rd 1865. Lee’s Surrender to our gallant Armies—headed by Grant, Sheridan & Weizel, and their associates—all the Glory of the present moment belongs: April 9th.” [Miller used the German spelling of Weitzel, which would have been pronounced the same.]

Weizel was well known as an important Union commander in his day, even though his name might not be as recognizable today as those of some of his peers.