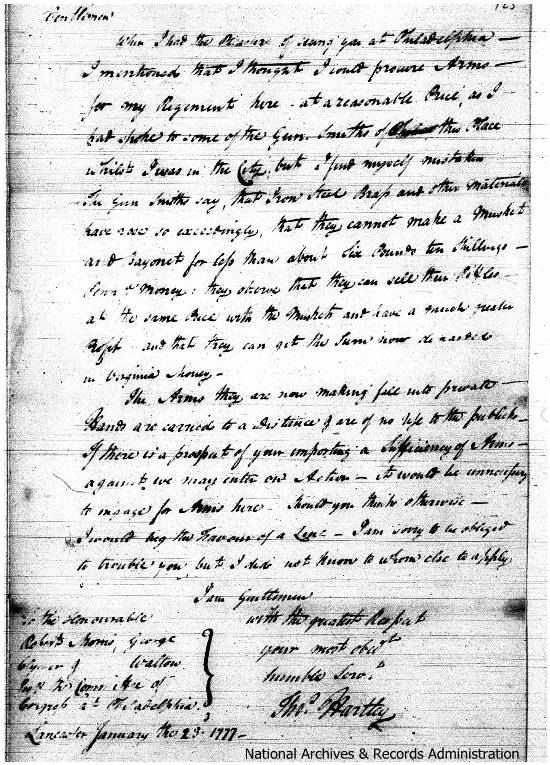 I found this 1777 letter last week while looking through the microfilms of the Papers of the Continental Congress at the National Archives. It seems that Colonel Thomas Hartley of York was trying to arm his regiment. He thought the gunsmiths of neighboring Lancaster County would help supply him, but as you can see they could make more profit by selling their rifles privately. It reads:

When I had the pleasure of seeing you at Philadelphia–I mentioned that I thought I could procure Arms—for my company here—at a reasonable price, as I had spoke to some of the gunsmiths at this place whilst I was in the City, but I find myself mistaken. The gunsmiths say that iron, steel, brass and other materials have rose so exceedingly that they cannot make a Musket and Bayonet for less than about six pounds, two shillings—Penn’a Money. They observe they can sell their Rifles at the same price with the Muskets and have a much greater profit and that they can get the Sum now demanded in Virginia Money.

The Arms they are now making fall into private hands, are carried a great distance, and are no use to the publick. If there is a prospect of your importing a Sufficiency of Arms—against we may enter on Action—it won’t be necessary to engage for Arms here. Should you thing otherwise—I would beg to favor of a Line–I am sorry to be obliged to trouble you, but I did not know to whom else to apply.

I am Gentlemen with greatest Respect your most obedient humble servant,
Thos. Hartley

Congress had established a committee, the Board of War and Ordnance, in June 1776. Morris, Clymer and Walton made up the committee in early 1777. The committee was replaced by a more permanent Board of War in July 1777.

The letter also touches on one of the biggest problems during the Revolutionary War period—money. There was never enough of it to procure supplies, pay troops or any other purpose. The cash available was fast depreciating, especially the continental notes issued by the United States. State issued money also circulated—in this case Virginia money seemed to be viewed as a better value than Pennsylvania money.

I’m always optimistic after I spend a day immersed in the Continental Congress papers—if our fledgling country could surmount the problems they had then, we can survive anything.

For more on the Revolutionary War and Continental Congress and the York connections click on the category links on the lower right.