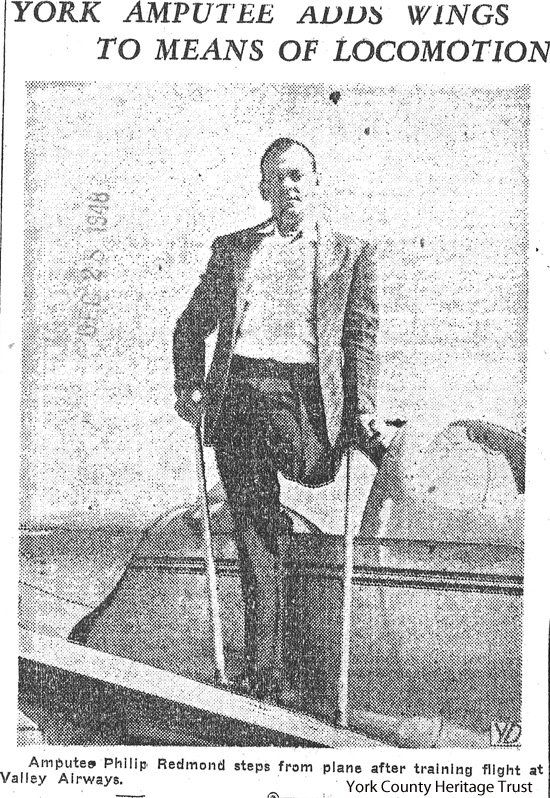 My recent post on the U.S. Army Civil War Hospital at York mentioned that a good many of the patients treated there had wounds of the extremities or were amputees. York County Heritage Trust Director of Library and Archives, Lila Fourhman-Shaull, recently shared a newspaper clipping with me that reminds us that amputation is one of the consequences of all wars.

The December 18, 1948 article tells the story of Yorker Philip “Buster” Redmond. It says he “…is well on his way to becoming the first York amputee to hold a private aviation pilot’s license.”

Redmond lost his left leg during World War II, when he was hit by an artillery shell at Lioano, Italy. He “entered the army in August 1943 and eventually was assigned to the combat engineers of the Fifth Army under General Mark W. Clark. He was hit by the shell on December 14, 1944, after he had fought his way up the Italian ‘boot’ after landing at Naples. After being hospitalized for nearly a year, he was discharged from Atlantic City hospital in October of 1945.”

The article goes on to say that Redmond is one of 123 disabled veterans employed at the local Naval Ordnance plant, where his supervisor reported that “he has been doing an excellent job despite his handicap.”

When the article was written, his instructor, Ken Bear of Valley Airways, said “…after a couple of cross country flights, Redmond with be ready for his private pilot’s license.” Bear also pointed out that the type of plane used by Redmond didn’t require foot controls.

I found Redmond’s obituary in the files at York County Heritage Trust. He passed away June 30, 1988. By then he was living in Red Lion. The obituary mentions that he was a U.S. Army Veteran of World War II, having received a Purple Heart. He had worked for Guy Hobbs and Davy Products in Red Lion and retired from Gichner in Dallastown.

His obituary doesn’t say if he every received his pilot’s license. I hope so.

Don’t forget to see more about York County’s people and their involvement in World War II, as well as World War I, Korea and Viet Nam in Front Porch to Front Lines: York County Goes to War. The well-received exhibit will be in place at York County Heritage Trust, 250 East Market Street, York until the end of 2012.