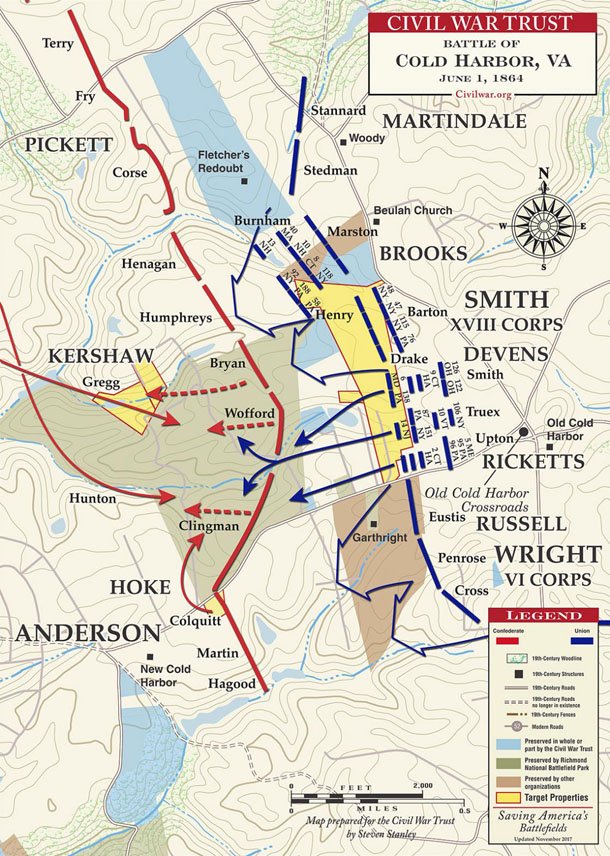 Even if you are not a die-hard fan of Civil War history, you might have heard of the Battle of Cold Harbor, fought in Hanover County, Virginia, not far northeast of Richmond. The conflict, fought June 1-3, 1864, resulted in extremely heavy causalities to Grant’s Union forces. Click here for a synopsis of the battle and casualty statistics. General Grant is often quoted as saying that one of his biggest regrets was ordering the fatal assault on June 3.It was especially important to York countians since the 87th Regiment, Pennsylvania Volunteers, a regiment made up of men from York and Adams counties, was in the midst of the battle. My great-grandfather, Amos Burk, had his arm amputated as a result of being wounded while part of a picket line there on the night of June 1. It turns out he was luckier than many of his comrades.

But there is another York County connection. Virginian Ella Bassett Washington had come to Clover Lea, her parents’ plantation near Cold Harbor to ride out the war. Instead, she found herself in its midst. She kept a journal of those harrowing days in June. That journal passed down to her niece, Lucy Neville Mitchell, who was married in September 1902 at Clover Lea. Her groom?–Stephen Fahs Smith, son of S. Morgan Smith. So Mrs. Smith and her aunt’s Civil War journal came to York County.

No one in the south knew where the Civil War would go next. Ella Bassett Washington (1834-1898), mistress of Beall Air plantation in Jefferson County, West Virginia, thought she and her children might be safe at her parent’s Clover Lea estate in Hanover County, Virginia, not far northeast of Richmond. She soon found she was wrong; that house sat on what is now known as the Cold Harbor battlefield.

The journal that Washington kept from May 27 through June 13, 1864 gives us insight as to what it was like living, with a child less than a year old, in the midst of an invading army. Her husband, Col. Lewis Washington, had been sent by the Confederates to France on a diplomatic mission shortly before the Union troops came to Hanover County. Washington’s chronicle has been used as reference by numerous noted historians and transcribed in its entirety by historian James O. Hall in the February 1978 issue of Civil War Times under the title “’An Army of Devils”: The Diary of Ella Washington.” The original manuscript copy is in the York County History Center Library/Archives.

How did this piece of history created by a loyal Confederate woman with deep roots in colonial Virginia end up in York County?

Ella Bassett Washington was a descendant of George Washington’s sister, Betty Washington. (Ella’s husband, Lewis Washington [1812-71], descended from two of George Washington’s brothers.) Ella’s ancestors also included Anna Maria Dandridge, sister of Martha Washington. Ella’s sister, Judith Bassett Mitchell (1835-1907), shared those roots, as did Judith’s daughter, Lucy Neville Mitchell Smith (1872-1961). In 1902 this daughter married Stephen Fahs Smith, son of Stephen Morgan Smith (1864-1942). (Mrs. Smith seems to have all but dropped the first name of Lucy after she moved to York. Many accounts, including the obituaries of her husband, herself and their only son, Burwell Smith (1903-1975), refer to her as Neville.)

Neville Smith appears often in the York newspapers during the 1930s and 1940s. Her husband, S. Fahs Smith, was helping to run the family’s S. Morgan Smith Company, founded by his father, while she was very involved as a leader in York civic affairs.

Mrs. Smith was the president, and one of the founders, of the very successful York chapter of Bundles for Britain during World War II. Bundles was started in 1940 to aid England during the Nazi Blitz. The York women quickly raised funds for a “mobile kitchen” to feed British civilians whose homes were destroyed; they sent needed surgical instruments and hospital cots and linens to help care for the injured and shipped over 40,000 pieces of clothing, nearly 6,000 of them knitted by Yorkers, to civilians and military in Great Britain. The York Chapter later supported Bundles for America, raising money to furnish day rooms for the soldiers at Fort Bragg in honor of York’s General Jacob L. Devers, who had commanded the post. The women continued to knit many garments, this time for members of the U.S. Coast Guard serving under Captain (later Rear Admiral) Ralph W. Dempwolf, another Yorker.

During World War I, Mrs. Smith had been the county chairman and helped to raise funds for YWCA War Work. Perhaps her interest in British welfare stemmed from the pride in her British lineages, such as the Washingtons, Bassetts, Dandridges and Burnets. She spent some time in England in her later years. In 1960 she financed and dedicated a plaque in the renowned Salisbury Cathedral in memory of seventh great-grandfather Bishop Gilbert Burnet (1643-1715), Canon at Salisbury. She was Chairman of the British-American Society, and member of National Society of Americans of Royal Descent, National Society of Colonial Dames and other linage societies.

Son of a Moravian minister turned industrialist, S. Fahs Smith remained loyal to York’s First Moravian Church, leaving a bequest in his will to establish a trust. Neville Mitchell Smith stood by her Episcopal roots. She was instrumental in establishing Camp Betty Washington in Spring Garden Township in 1924. It was named for her colonial ancestor and served the Girls Friendly Society of the Episcopal Church of Harrisburg Diocese until it was closed in 1940. The camp name lives on in the busy road that goes by the site.

Neville Smith had many interests. In 1936 she was granted a patent for an ornamental cherry tree, based on her creation having longer drooping branches, more abundant leaves and more prolific blooming habit than other cherry trees. I believe one of her original trees still blooms beautifully each spring, adjacent to the Smith’s stately Dempwolf-designed home, Eltham (named for the original Bassett estate in Virginia and an earlier English palace), just off Grantley Road.

S. Fahs Smith was active with the Historical Society of York County (now part of the York County History Center), vice-president of its Board of Directors when he died in January 1942. Mrs. Smith also was interested in history, so I assume that is how YCHC acquired her aunt’s Civil War account. Other family items had passed down to her, including an important June 1775 letter from George Washington to his brother-in-law, and Neville Smith’s ancestor, Burwell Bassett, noting that Washington has just been elected Commander-in-Chief of the Continental Army. She donated that letter to the Mount Vernon Ladies Association in 1935. Another of her other Revolutionary-War era interests was the Cookes House in York, where Thomas Paine is said to have lodged when he visited Continental Congress during their 1777-78 stay here. In the early 1950s, she helped organize the restoration of the Cookes House.

Ella Bassett Washington had other accounts of life during the Civil War published during her lifetime, leaving a legacy of knowledge of civilian life in the South during that period. Although not a writer, Lucy Neville Mitchell Smith, certainly left a legacy of accomplishment in the York community.