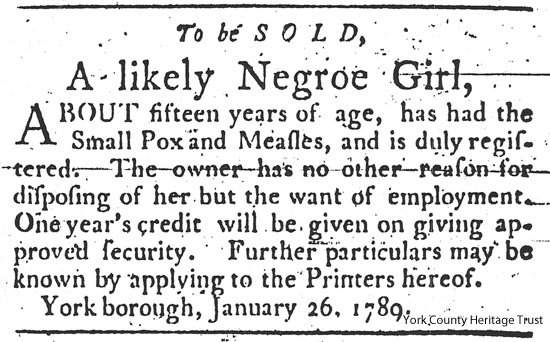 Can you imagine your home town newspaper with ads selling human beings? A 15-year-old being sold because her master/mistress didn’t have enough work for her (seller offering financing)…families split apart…children as young as four being sold away from their mothers?

Well, it did happen here. The ad above is from a January 1789 issue of the Pennsylvania Herald and York General Advertiser, published in York by Edie and Willcocks. Every issue seems to have ads about slaves for sale or runaway slaves being sought, usually from adjacent Maryland. This is not a proud part of our history.

To learn more about slavery in York County, see my recent York Sunday News column below:

Slavery is in the spotlight now, with the 150th commemoration of the Civil War. It’s not something we like to think about in York County; it’s a dark part of our local history. Even though Pennsylvania’s passed its anti-slavery law in 1780, the last York County enslaved person is said to have lived until about 1841 in Hanover.

How did that happen? The 1780 Pennsylvania law, the first such in the nation, was entitled “An Act for the gradual Abolition of Slavery.” It directed that “all…Negroes and Mulattos…born within this State…after the Passing of this Act, shall not be deemed and considered as Servants for Life or Slaves… .” But these children would not be freed until they reached the age of 28.

Another part of the law stipulated that anyone who was a slave when the law took effect continued as such, but they had to be registered by their owner with their county court, or they would be deemed free. Few slaves, therefore, were freed immediately.

Gibson’s History of York County says there were 29 slaves in the town of York in 1780 and names their owners. The account lists 30 slaves in Manchester Township (including West Manchester), 40 in Fawn (including Peach Bottom), seven in Newberry (including Fairview), 14 in Manheim, 21 in Monaghan (including Carroll and Franklin), 10 in Windsor (including Lower Windsor), two in Paradise, five in Codorus, 14 in Heidelberg (including Hanover), 22 in Shrewsbury, eight in Hellam, 21 in Chanceford (including Lower Chanceford), and five in Hopewell. The names of the slaves are not listed, and only two of the owners are: William Chesney, operator of the ferry below New Market and James Dill of Monaghan, perhaps because they owned seven and nine slaves respectively.

The Gibson account also states that there were 471 slaves in York County (including Adams County) in 1783 and 499 slaves in 1790. York, as a separate county, had 77 in 1800, 22 in 1810 and six in 1820. Recent writings speculate that these census numbers might not be accurate, that the persons who would become free at 28 might not have been counted as slaves.

Numbers give us some perspective, but it is the documents and newspaper ads that give life to these enslaved individuals. Following are just a few heartwrenching examples documented at York County Heritage Trust or the York County Archives.

This chilling ad, from the March 30, 1811 York Recorder inspired me to write this column:
“FOR SALE. A Negro Wench who has 5 years to serve, with a boy 2 years old. Also a mulatto girl aged 4 years. They will be offered to the highest bidder on Wednesday the 3d day of April next at the house of Jacob Upp, in the borough of York.” The names of the slaves and owner are not mentioned. When you go deeper into this ad you cringe that a four-year-old would be sold separately. You also wonder, since she is called a mulatto, could the seller be her father?

York County jailers often advertised suspected runaway slaves in their custody. In February 1789, Michael Greybill had Henry Horte in York “Gaol.” He was described as: “…very smart and expert in tumbling and walking on his hands, and says he has no master. The owner, if any, is desired to come within four weeks from this date, otherwise he will be sold for his fees.” So even though he said he had no master, if no one claimed him, he would be sold. That sounds like a lose-lose situation.

Another ad in early 1789 read:
“To be sold, a likely Negroe Girl, about 15 years of age, has had the small pox and measles and is duly registered…One year’s credit will be given on giving approved security. Apply to printers.” That meant the newspaper printing office would put a prospective buyer in touch with the seller. She was outrageously being sold on credit, just like any commodity or piece of land.

Many runaway ads were published in local newspapers for Marylanders. Also in 1789 Jacob Bond and Robert Dutton of near Joppa, Harford County, advertised for “Negro Man Will, 25.” He “took along two horses, and wife 18 or 20, two boys about five and two.” He “had forged pass, made towards little York.” The woman and children were the property of Dutton and Will belonged to Bond. Slavery was no respecter of family ties.

Even after you were free, you still had problems as long as slavery existed elsewhere. John Hall was so perplexed he had this ad printed in a York newspaper (date unknown):
“To the Public
WHEREAS I, JOHN HALL, late an inhabitant near George Town, Montgomery County, in the State of Maryland, being a free Negro, having lately moved into Warrington Township, York County…and whereas I cannot get employ in any kind of labor, by reason of doubt that has arisen in the minds of some people, in and about the neighborhood where I now am…touching my being free. I therefore notify any person whatsoever, that can have any just pretention of claim or right to me, to appear and make their right legally appear, and I shall then be ready to go with them. JOHN x HALL ( his mark).”

A bill of sale, dated April 29, 1809, documents the sale of “Phyllis Harris, my Negro Slave” by
Jennet Grier, widow of Revolutionary War officer David Greer, of York, to “John Madison, a free man of Colour of the County of York” for “Twenty Dollars, good and lawful money of Pennsylvania.” This original document was presented to the Historical Society of York County in the 1930s. A note says the donor, James G. H. Browne, York barber, was a descendant of John and Phyllis (Harris) Madison.

Many view slavery as the primary cause of the American Civil War. York County Heritage Trust’s exhibit The Fiery Trial” York County’s Civil War Experience, covering all local aspects of the war, will open to the public on June 29, 2013.

Another ad tells of a girl’s escape in York County.