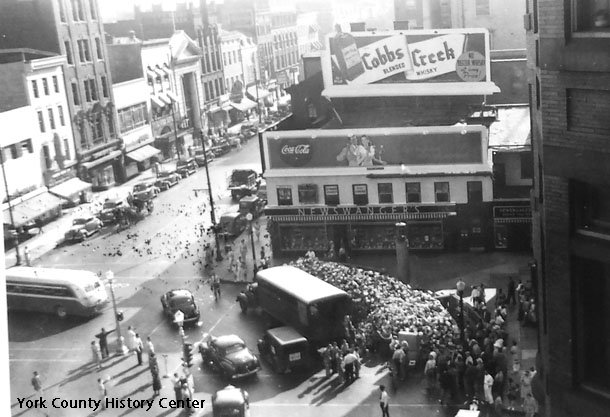 My recent post shared some of the World War II related items from one page of the Gazette and Daily of October 1943. The rest are transcribed below. We might tend today to forget how such a major conflict affects just about all of those left back home, whether missing family and friends gone off to war, working directly to manufacture war materiel, or trying to conserve consumption so that food and fuel are available for the troops.

Besides all the military news included in each community’s local news, a small public service announcement at the bottom of the page also has to do with the war. It reads:

UNITED STATES IS AT WAR: Fats, Tin Cans, Waste Paper, Rags, Scrap metal are needed. Turn Yours In Today. The photo above, from the war years, shows cans collected in huge bins on the southeast quadrant of the York square.

Pfc. Melvin Baker, son of Mr. and Mrs. John S. Baker, near here, who is stationed at Fort Benning, Ga., is spending a furlough at the home of his parents.

Pvt. Charles B. Wallace, this place, who was inducted into the Army several months ago, has been transferred from Fort Custer, Mich., to Camp Como, Miss.

Lieut. Richard G. Eustice, former member of the faculty of East Berlin High school, is at Goodfellow field, San Angelo, Texas, where he is teaching meteorology

Clair Starry has been transferred from Camp Livingston, La. to Rome, N.Y.

Cpl. Lloyd Hannigan, Camp Edwards, Mass., spent the week-end at the home of his parents, Mr. and Mrs. Walter B. Hannigan.

Some of the young people mentioned on just this one page probably never returned from the war, others undoubtedly suffered wounds. A few perhaps still survive; if you know any, pass on thanks from us all for their service.