We probably have all known local people who bravely served in the military during World War II.

During that time the home front was also very busy. I have written columns and blog posts about the York Plan, the system of cooperatively switching our factories from peacetime to wartime production that became a national model, and about the strong local USO programs York countians provided.

I knew very little, however, about the York County Branch of Bundles for Britain. York County Heritage Trust staff and volunteers, doing research for an exhibit in conjunction with the January 21 “Swing at the Market Street Canteen” came across shared a large scrapbook and a hand knitted vest from the local Bundles of Britain chapter. I was astounded by what these local women, who would ordinarily been homemakers and society women, accomplished in two short years. My York Sunday News column, highlighting some of their projects is below.
(The Swing at the Market Street Canteen event is from 6:30 to 9:30 on January 21 at York County Heritage Trust, 250 East Market Street, York. It will feature food, drink and dancing to a live band. Tickets are available at the museum or through the www.yorkheritage.org website.)

Here is the Bundles for Britain column:

While selecting World War II items to display in conjunction with their “Market Street Canteen” event on January 21, York County Heritage Trust staff and volunteers discovered a hand knitted sweater vest with the label “From Your American Friends BUNDLES FOR BRITAIN, YORK COUNTY BRANCH, YORK, PENNSYLVANIA.” They also discovered a large Bundles for Britain scrapbook, kept by Mrs. J. J. (India) Cadot, in the YCHT Library/Archives.
Mrs. Cadot was the Executive Vice President and “driving force” behind the staggering accomplishments of the over 2,000 volunteers who made up the BFB York County Branch. When later awarded the prestigious King’s Medal for Service in the Cause of Freedom, she accepted in the name of all those volunteers.

The volunteers gathered clothing, surgical equipment and monetary donations; sewed; knitted; operated a thrift store; organized fund raisers and did anything else that would help the British civilian victims of air raids and the British servicemen. York County residents and businesses generously opened their purses to fund relief for those who lost their homes and for hospitals devastated by the German Luftwaffe. When you read the clippings, you start to get an idea of how the British public suffered and how those stories stirred our local citizens to do all they could, even as this country was not yet at war. Several of the many projects are outlined below. Most of the clippings are undated, but dated letters help to determine the chronology.

The local BFB Branch opened its office and thrift shop on November 6, 1940 at 5 West Philadelphia Street. The women of the York branch didn’t take long to mobilize. Shipment of thousands of donated garments from across the county began almost immediately. The national office soon expressed gratitude that the entire county was working together, and asked for names of towns and women in charge, to list as united under the York Branch.

The clippings report hundreds of “Dorothy bags” donated and shipped during the two years York’s BFB branch was active. These 12 by 13 inch cloth bags were easily made at home of heavy colored or printed cotton fabric (cretonne) with a white patch on the front for the owner’s name. Closed by a drawstring to loop over cots in air-raid shelters or hospitals, they could hold the few personal belongings victims might salvage as they fled the bombing raids.

The first major special project undertaken by the York branch was to raise $1,500 ($25,000 today) for a “Mobile Kitchen” to be used to feed British civilians whose homes had been destroyed. A receipt for the funds was issued by the New York BFB office on December 23, 1940.

Hospitals, as well as homes, were bombed. York BFB also immediately responded to pleas for surgical instruments, as well as cots and blankets. Although it was a women-run organization, men were welcome to help any way they could. By the beginning of December 1940, local doctors were giving extra surgical implements to a committee headed by Dr. Langston. A clipping reporting “York Sends Surgical Instruments Valued at $2,875 to Britain” lists 16 donating physicians from around the county.

Cots were needed, especially for children, both in hospitals and for sleeping in shelters after their homes were destroyed, or while waiting out air raids. They cost $25 each, which included a mattress, pillow, two flannelette sheets and enamelware. The funds were sent to BFB headquarters, to be made in America and shipped to England. A February 1941 clipping stated “York to Send 100 Cots to Children of Britain.” More followed as funds were raised, including donations from children putting on back yard shows.

Also, during York BFB’s first few months a plea was received from the main office for help in raising the $3,500 ($58,275 today) needed to rebuild and reequip the resuscitation ward of the West Bromwich & District General Hospital, near Birmingham, England. It had “suffered terrific bomb damage” but still was “performing heroic work caring for air raid victims as well as usual work.” By March 18, 1941 BFB headquarters thanked Mrs. Cadot for raising the funds and expressing how proud the organization was of the York County branch. The West Bromwich hospital was so appreciative that they had a bronze plaque put up commemorating the York County Bundles for Britain.

Besides knitting thousands of woolen garments to British military regulations to keep troops warm, the local BFB “adopted” their own airman, John W. Brant. As did other American young men who couldn’t wait to get into the fight against the Axis powers, Yorker Brant enlisted in the Royal Canadian Air Force in May 1941 to become a pilot. After training, his bomb squadron duties included curbing enemy submarines from a base in Newfoundland. The York women outfitted Brant with two v neck sweaters (one sleeveless). a single and a double scarf, a helmet with ear phone holes, gloves, two pairs of mittens (one pair thumbless), three pairs of socks and a pair of sea boots. Before shipping the knitted goods, a short consecration service was held at St. John’s Episcopal Church, where Brant had been a choir boy.

The York Branch BFB closed in the fall of 1942. By that time America was well into the war and York County had done much to help the people and hospitals of Britain during the terrible Blitzkrieg of 1940-41 and then warmed many civilians and military personnel with their donated and knitted clothing. Distribution of locally donated items continued for several years, attested to by handwritten letters, such as the January 1944 thank you from Frank McGinley of the RAF for the recently acquired York made scarf, pullover and socks keeping him warm against the cold desert winds of northern Africa.

Exact figures are scarce, but a Sunday News article about Mrs. Cadot receiving the King’s Medal in 1948 says, besides the projects recorded above, York BFB had sent “more than 35,000 reconditioned woolen garments and nearly 6,000 new hand-knitted garments.”

There is much more in the scrapbook, including an enthusiastic V for Victory campaign and very successful fund raisers, including auctions, a “county fair,” collection of license plates for scrap, and an exhibit at Wiest’s department store of Hollywood star Colleen Moore’s $435,000 castle doll house with chandeliers of real diamonds.

I will be sharing additional local BFB accomplishments on my www.yorkblog.com/universal blog. The York County Heritage Trust is also eager to have more information on the subject. If you have papers or objects related to the York County BFB, or personal recollections, please contact lfourhman-shaull@yorkheritage.org or rwarner@yorkheritage.org, 717-848-1587 (YCHT) or contact me. 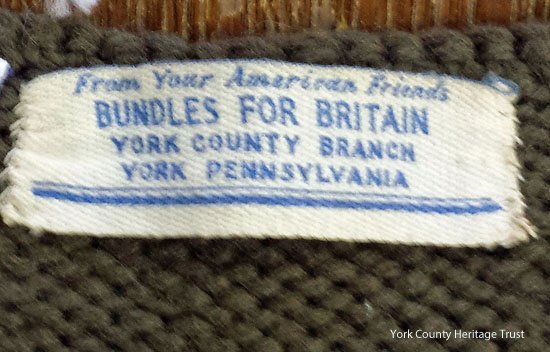