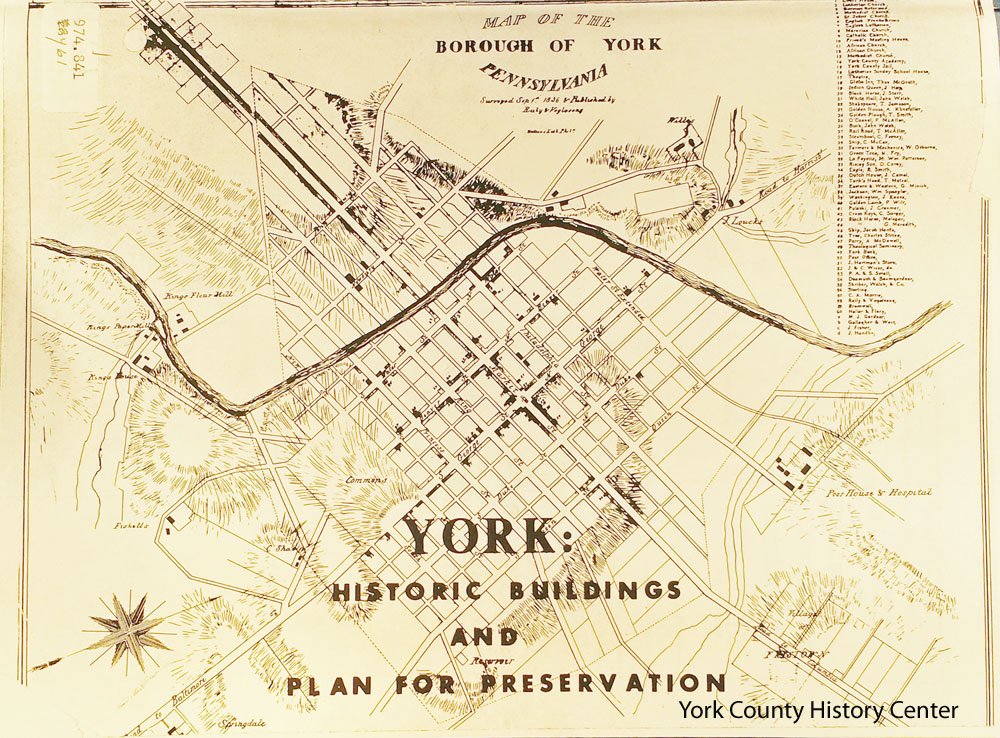 Over the years the York County History Center Library and Archives has collected many plans for preservation of our local historical architecture and other resources.  Most of them are full of good ideas on how not to lose those valuable resources.  Unfortunately, many have not been implemented at all, and whole landscapes and streetscapes have been lost.  You might find it enlightening to stop by and go over some of them.  Here is my recent York Sunday News column looking at a very through 1976 study.

Sometimes it seems like we do lots of studies, but not a lot of implementation.  There are reasons this often happens, many times involving funding.  Noted landscape architect Frederick Law Olmsted, Jr. proposed a linear park along the Codorus in his 1907 plan for York.  Some elements were very similar to those currently on the table.  Other comparable proposals were made in the interim, none of which have come to fruition.

Olmsted’s plans were not carried out because the citizens of York voted down a bond proposal that would have financed his suggestions.  What is really alarming is that they voted down a companion bond issue to fund a sewage system that Olmsted pointed out was essential to alleviate horrendous sanitary conditions.

I found a detailed study at the York County History Center Library/Archives that many of you might not know about.  This 1976 plan is titled York: Historical Buildings and Plan for Preservation.  The report was put together by the York Office of City Planning, partly funded by the U.S. Department of Housing and Urban Development.

The report provides an inventory of historic buildings and sites in the City of York.  It first summarizes York’s historical development, then discusses “York’s multifaceted architecture, its historic buildings, and the architectural characteristics of its neighborhood areas.”  The narrative examines York’s previous historic preservation activities and discusses problems that led to destruction of historic buildings.  It concludes with a preservation plan with tentative goals and projects, actions for specific buildings and recommends nominating selected buildings and areas to National and State Registers.  Design controls, zoning, adaptive reuse and funding are discussed, and it includes proposed areas for conservation, restoration and rehabilitation.

A four page introduction jumps right in, pointing out that York was being promoted at the time by the tourist bureau, Chamber of Commerce and downtown merchants as “Colonial York,” basing that on Congress meeting here for nine months during 1777-1778.  The report estimates that there were only five or six existing buildings from that period.  It names the Gates House and Plough Tavern (157-161 West Market), Cookes House (South Penn at the Codorus), Fisher House (19 North George) and houses at 322 West Market and 22 South Beaver.

It gets right to the point, that York is not a colonial town architecturally, but a Victorian industrial town, extolling the 1870s-1890s brick row houses, as well as the “outstanding” large Victorian houses near Farquhar Park and in the area of South George and Springettsbury.

While allowing “York’s role in the Revolutionary War cannot be underestimated,” much more remains of “York’s great industrial” past.  Industrialists, merchants and bankers were leading citizens, and York’s manufacturing prowess has had the most national impact.  Numerous homes of factory workers and owners and many of the factories still stood as examples of this industrial past.

The complete report of historically and architecturally significant buildings documents York’s history.  The surveyors interpreted the examples loosely, addressing buildings that were then (over 40 years ago) 50 to over 200 years old.  They recognized that some of these old buildings were deteriorating or falling victim to redevelopment, saying: “Unfortunately, the philosophy of neighborhood redevelopment is not working too well,” since affordable housing for those who had been displaced was often not constructed.

The reviewers pointed out that the cost of fine oak floors and brick and wood ornamentation of upscale homes of the 1800s would have been prohibitive by the 1970s; these attributes would be thus forever lost by demolition. Smaller structures built before 1850 were included since many had noteworthy features of brick work or log construction. Row houses were often noted as part of a unit, since the aesthetics of the streetscape contributed to the architectural importance of a good part of some blocks.

Another consideration was that architecture reflects social and economic life styles. Thus mansions, middle class single houses and workers’ houses are all architecturally important to clearly interpret our past.  The authors noted that their goal was to be comprehensive.  The end result would include goals and a plan of action for preservation in York.

The complete inventory of buildings includes location, architectural style and history notes with ratings of overall significance.  This was meant to help the Historical and Architectural Review Board (HARB) and also requests to the city for demolition permits. Secondly, the historic preservation plan was meant to aid the city in encouraging preservation, including allocation of funds and spurring privately funded preservation.

The sections of the report that discuss historic activities and goals as well as plan proposals are valuable tools that could be quite viable today.  Of most immediate interest to historians, however, is the Historic Buildings Inventory, presented as an appendix and also summarized in table form. I am listing a few examples below.  Some were, or are being, preserved; some have been demolished and some wait an uncertain fate.

53 North Duke Street—(Dr. Blair House)—An excellent Classical Revival house of the mid-1800s, this home was built by P.A. Small for his daughter and son-in-law, Dr. Blair.  Note the iron galleried floor length windows.  All of the iron ornamentation was made at the Variety Iron Works.”  (The exterior of this house looks to be very well preserved.)

36 South Duke Street—(Zion Lutheran Church)—The church was built in 1851 by English-speaking Lutherans objecting to the continued use of German in services.  The building was renovated in 1907 when the Romanesque façade and brownstone trim were added.  An 18th-century cemetery is adjacent to the church.” (The church building is being renovated as part of the Yorktowne Hotel project.  Some graves adjacent to the church have been moved.  When the building was owned by the county some years ago, there was talk of it being demolished, perhaps for parking. Local historians and the press brought it to light that part of the church was built over the former Christ Lutheran cemetery, with graves, and even several gravestones, still in place.)

322 to 332 North Court Street—An excellently preserved row of one story brick row houses of the 1860s or 1870s, which are the only remaining examples of this style of workers’ homes in York.”  (Alas, the area is now parking lots.)

Planning is great, but let us keep in mind that following with action is better.