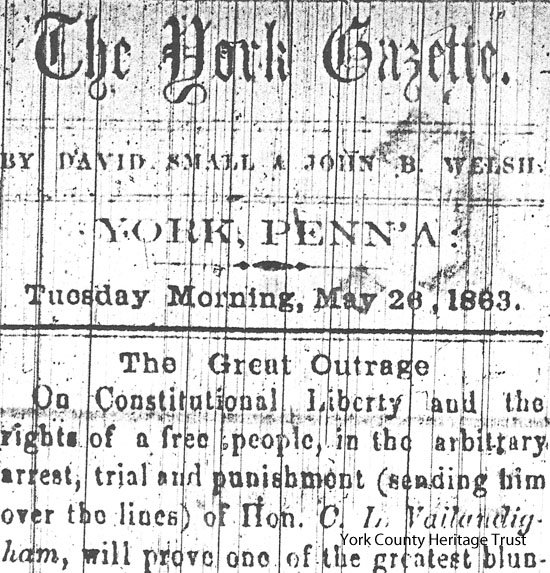 In one month we will be observing the 150th anniversary of some of York County’s darkest days, the occupation of our area by Confederate troops. It was bad enough, with the loss of the bridge across the Susquehanna at Wrightsville; goods, food and livestock taken across the county and combat at Hanover, but it could have been much worse if, after three days of occupation, General Jubal Early and his soldiers had not been called to Gettysburg by General Robert E. Lee.

This is the first in a series of posts gleaned from the York Gazette during the month preceding the occupation. The Gazette was a Democratic paper, very anti-Lincoln administration, very anti-abolitionist and very supportive of the Peace Democrats, or “Copperheads,” who wanted the Civil War to end, with or without the southern states reunited and with or without the continuation of slavery.

There were Republican newspapers, which just as vividly expressed opposite views, printed in York at the same time. Unfortunately, I do not know of existing copies covering all of June 1863, so I am using the Gazette, which is accessible on microfilm at York County Heritage Trust. Notwithstanding the strident stance against the war and the Republicans, the Gazette supported the soldiers and also published straightforward dispatches on action from the many fronts.

The top story in the Gazette 150 years plus one month ago was the recent arrest of the top Peace Democrat (or head Copperhead, if you will), Clement L. Vallandigham. The former Ohio congressman was charged with violating General Order No. 38 prohibiting disloyalty, issued by the commander of the Department of the Ohio, General Ambrose Burnside. Vallandigham was quickly tried and sentenced to federal prison, but President Lincoln commuted the punishment to exile to the South, allegedly to avoid Peace Democrats rallying around him. (Vallandigham soon found a way to get around the sentence.)

The Gazette dedicates several columns of its May 26, 1863 weekly paper to accounts and opinions of its own and other newspapers, decrying the unconstitutionality of Vallandigham’s arrest and conviction. The paper says the case “will prove one of the greatest blunders of the present blundering Administration.” General Burnside claimed full responsibility for Vallandigham’s arrest and trial, but a report from Cincinnati, repeated in the Gazette states that: “After the arrest the President telegraphed to Gen. B. that he would sustain him in his efforts to support the government.”

Click this link to read my previous post on Clement Laird Vallandigham’s very close ties to York County. Hint: the clue lies in his middle name.