York County native went down the Susquehanna to make his millions 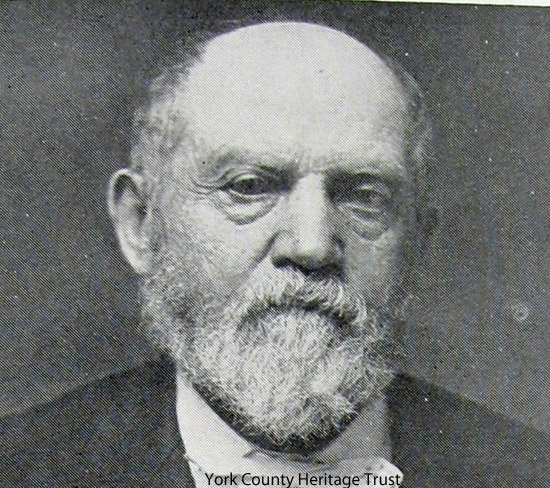 What do Cecil County, Maryland’s first millionaire; the 1871 candidate for Governor of Maryland and the founder of several steamship companies have to do with a York County native?

They are just a few accomplishments of Jacob Tome, born in the Hanover area and raised in Chanceford Township. His fortune, started with the lumber business, also enabled the construction of the Tome Institute school at Port Deposit. The school buildings later became the core of the Bainbridge United State Naval Training Center. See below for my recent York Sunday News column on a poor York County boy who made very, very good:

Jacob Tome (1810-1898) grew up poor in York County, but died at Port Deposit, Md. as one of the richest men in America. He was acknowledged as the first millionaire in Cecil County, leaving an estate valued at “several million,” even after donating millions to charity and education during his lifetime. Some accounts of Tome’s early life differ in the details, but there is enough documentation to piece together a good picture.
Tome was born near Hanover, Pa. August 13, 1810, one of twelve children of Christian Tome (1783-1826) and Christiana Baugher Tome (1786-1836). His paternal great-grandfather seems to be immigrant Benedict Tome/Thom/Dohm (1720-1806). Benedict is buried at Blymire’s cemetery in York Township, but his wife Veronica Harman Tome (1721-1811) is buried at St. Luke’s cemetery in Chanceford Township, as are many of their descendants. The Baughers were from the Hanover area, but Jacob’s parents moved to the New Bridgeville area, near Tome relatives, sometime between 1812 and 1816.
Accounts say that Jacob was about 16 when his father died, and he had to leave school to help support his mother and younger siblings. He went to work in Chanceford Township for Col. Robert Graham, helping with Graham’s farming, storekeeping and waggoning to Baltimore. He later oversaw fisheries on Stony Island in the Susquehanna and worked across the river as a clerk in Marietta and a schoolteacher. Growing up and working near the river, Tome must have been familiar with the huge rafts of logs floated down the Susquehanna every spring. It is speculated that he made his first visit to Port Deposit with some of those rafts. Port Deposit was a booming depot where the logs were traded and sold, some diverted north by the Chesapeake and Delaware canal, and some continuing to Baltimore. Lumber was also big business in Port Deposit; Tome started working as a clerk in the lumber business when he moved there around 1835. Lumber merchant and banker David Rinehart from Marietta may have known or employed Tome previously. At any rate, Rinehart seems to have recognized Tome’s business sense and offered him a partnership in a lumber business.
Tome furthered his business education by either commuting to, or spending a winter in, Philadelphia to learn bookkeeping. He became involved in more ventures connected with the lumber trade, including acquiring forest land in Pennsylvania. He bought farms in Maryland and Pennsylvania, and was involved in agricultural products and in coal.
In 1849 Jacob Tome, with John S. Gittings and others from Baltimore, established several steamboat lines, including one from Port Deposit to Baltimore. He also was a founder of the Baltimore and Fredericksburg [Virginia] Steamboat Company. He had interests in the ownership of at least four banks and was a director of railroads and other companies.
Although a staunch Union Republican, Tome was elected to the Maryland State Senate in 1860, serving two terms and taking part in the “bridge fights,” in which he helped successfully amend the Perryville bridge bill to make the bridge high enough to allow passage of boats. He was unanimously chosen to be the Republican candidate for Governor in 1871. Even though losing to Democrat William Pinkney White, he carried his Democratic home county, Cecil, “…by a handsome majority.”

Tome was involved with officials of the federal government and was a friend of U.S. Grant. He was reportedly offered a post in Grant’s cabinet, but declined, recommending friend John Andrew J. Cresswell, who became Postmaster General. (Port Deposit was originally called Cresswell’s Ferry.) As a delegate to the 1880 Republican National Convention, Tome was one of the “306” or “old guard,” that stood firm for Grant, who was defeated by Garfield for the candidacy on the 36th ballot. The old guard reportedly “…wanted to unite the country, and get away from sectionalism.”
Tome married Caroline Webb in 1841, and they had three children, all of whom died young. Caroline died in 1874, and Jacob married Evalyn Nesbitt ten years later. Evalyn became involved in the Tome philanthropic and business ventures, becoming the first president of the Tome Institute school board. She also was one of the first woman bank presidents, taking over that post at Cecil National Bank when Jacob died.
The Tomes completed Hytheham, a handsome granite mansion on the cliffs overlooking the Susquehanna, in 1872, with “velvet lawns and magnificent terraces gardens.” It was razed in 1948, but the granite church Jacob built for $66,000 and presented to the Methodists in 1871, now the Tome Memorial United Methodist Church, still houses an active congregation. Tome supported churches and schools of all faiths and races around Port Deposit.
His crowning achievement was the Tome Institute, a free school founded for Cecil County children. The day school opened in 1894, with 600 student capacity quickly reached. Estimated construction costs were around $500,000, and Tome’s initial endowment was $2,500,000. Jacob passed away on March 16, 1898, pleased that the first commencement from the school was about to take place. An even grander school with multiple buildings, was erected above Port Deposit after his death. Probably due to the Great Depression, the Institute’s holdings depreciated to a point that the upper campus was sold in 1938 and closed in 1941, but in 1942 the U.S. Navy took over, and the site became the core of the Bainbridge USNTC, eventually training 244,000 sailors.
The Jacob Tome Institute lower campus moved to North East, Md. in 1971. Now known as the Tome School, it still educates girls and boys, and is known for its comparatively low tuition, thanks to Jacob Tome’s initial endowment and a parent-volunteer initiative. The main Port Deposit building, Washington Hall, was demolished by its owners, Wiley Manufacturing, for a parking lot in 1980. Its massive entrance arch, with stone portraits of Evalyn and Jacob Tome, still stood recently.
USNTC Bainbridge closed in 1976, and in 2000 the closed base, including multiple imposing former Tome Institute stone buildings, was turned over by the federal government to the state for redevelopment. From what I have been able to gather, even though slowed by the lagging economy, redevelopment plans are moving forward.

These links will take you to more on the Tome Mansion and the original Tome School. Even though there are only remnants of these two building, there is still much more to remind us of York County native Jacob Tome’s legacy in the charming town of Port Deposit.