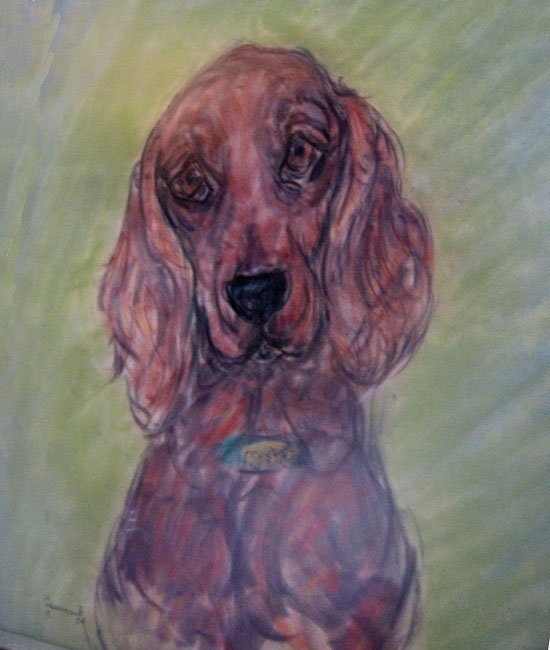 Perhaps you have seen, or maybe even have, one or more of H. Robert Hildebrand’s personality-laden dog portraits. The portrait above is in a private York collection, and I know of others of York County dogs.

Hildebrand was born in York County in 1906, the son of Thomas W. and Adella I. (Trumpfheller) Hildebrand. The following is from an undated brochure (perhaps 1950s) about the artist and his work in the York County Heritage Trust Library/Archives:

“Hildebrand is a Pennsylvania-Dutchman. After studying at the Pennsylvania School of Industrial Art, at Northwestern University and at the Beaux Arts Institute in New York, he followed the career of architectural designer until 1930, when he became a portrait painter.

For the next eight years, during the depression, he concentrated on human portraits, but also painted an occasional dog. These dog studies proved so popular and the demand for them so great that Hildebrand decided, as he puts it, to reform and to portray animals exclusively. Since then, from his studio in Washington, D.C., he has painted more than 13,500 pets and his patron list runs from ambassadors to famous ball players.

Hildebrand’s portraits of the dogs of New York City’s “400” were shown privately at the Tuxedo Park Club; those of Pittsburgh at the Rolling Rock club. The State of Pennsylvania exhibited his work in the Capitol Gallery and individual pictures have been hung in many well-known galleries.

Of his dog portraits Hildebrand says: “External appearance is of secondary importance compared to a dog’s psychological make-up. In my studies I definitely emphasize the dog as an individual, not as a show-piece.”
You can certainly see that individuality shining through each dog’s eyes, looking straight at you in each portrait.