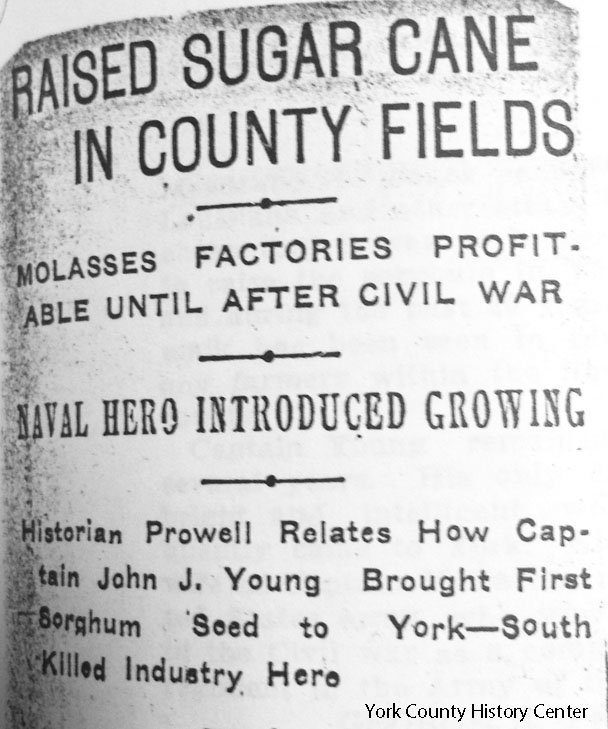 York County historian of a century ago, George R. Prowell, was a prolific (and sometimes wordy) recorder of York County history. Some of the stories he wrote were passed on from others, perhaps with occasional errors creeping in. Still, Prowell’s writings are the only source for quite a few interesting accounts, such as the one below.

A lengthy newspaper clipping pasted in one of Jere Carl’s dozens of turn-of-the-century scrapbooks in the York County History Center Library/Archives is headed:

Prowell says David Heckert told him that retired naval Captain John J. Young introduced the sorghum plant into York County in 1858. Young was said to have been on the Lawrence during the Battle of Lake Erie. The ship was commanded by a Captain Elliott, whose wife was a daughter of General Jacob Spangler of York. After recovering from a later shipboard accident that resulted in partial loss of his legs, Young came to York to visit the family of now Commodore Elliott, and he stayed.

Young’s son, also in the Navy, brought sorghum seed to York and some local farmers planted them. Captain Young built a sorghum factory in Jacob Heckert’s back yard and had rollers and two large shallow pans made at the Variety Iron Works. The rollers crushed the corn-like sorghum stems and extracted the juice. This was reduced in the pans over an open flame into molasses-like syrup.

After Young succeeded, Prowell continues: “Samuel Fitz of Hanover, started a sorghum mill. Isaac Taylor started another near Newberrytown. There was one erected at New Oxford, another in Lower Windsor, another down in Hopewell township and several others throughout the county. For ten years or more the practice of cultivating the sorghum plant, known to the farmers locally as ‘sugar cane’ was carried on. Many barrels of molasses were made during the Civil War and as late at 1873.” Prowell goes to say that the “Meantime the sugar cane products of Louisiana and other states become so cheap that it was no longer profitable to raise the sorghum in York County.”

Who would have thought that at one time you could have bought “molasses” grown and processed in York County?