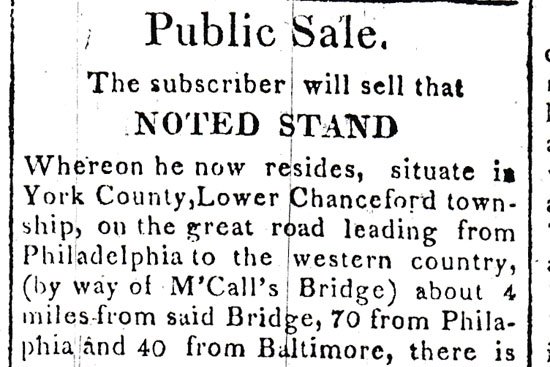 Newspapers of the past give a good look at the lives of our forebears. The advertisements can sometimes reveal more than news items. The ad below, from the York Gazette, for Richard Porter’s tavern, store, house with barn and other outbuildings, livestock, farm equipment, furniture and land, including an island with fishery, paints an especially clear picture.

“Public Sale
The subscriber will sell that
NOTED STAND
Whereon he now resides, situate in York County, Lower Chanceford township, on the great road leading from Philadelphia to the western country, (by way of M’Call’s Bridge) about 4 miles from said Bridge, 70 from Philadelphia and 40 from Baltimore, there is
106 Acres OF LAND,
adjoining and attached to this stand. It is supposed to be the best stand for public business on the said rout, and is at present occupied as a store, and has been occupied for a
Store & Tavern,
for upwards of twenty years, the improvements are a two story
Dwelling House,
with a Kitchen and convenient bank Barn, and an excellent never failing Spring, within a short distance of the house, and a stone Milch House; and a good well of water near the door, there are
TWO BEARING ORCHARDS
of choice fruit on the premises. If the above property is not sold before the fourth day of April, it will then be exposed to public sale on said day, where there will also be sold a
Quantity of Store Goods,
Horses, Cows, Sheep and Hogs; Farming utensils, House-hold Furniture, &c.
If a purchaser would wish to have more land, I will also sell a
Tract of Wood-land,
a short distance from said stand. On said day will be offered, an Island and half of a Fishery, in the River Susquehannah, if not sold at private sale before, immediate possession will be given.
RICHARD PORTER.
Lower-Chanceford, March 4, 1816.”

It is intriguing that the tavern stand was located “, on the great road leading from Philadelphia to the western country, (by way of M’Call’s Bridge).” Master bridge builder Theodore Burr’s acclaimed creation lasted less than three years (1815-1818) before it was destroyed by ice. The “lower end” of the county might be entirely different if the bridge had survived.

The Susquehanna River was not bridged again in that area until 150 years later with the opening of the Norman Wood Bridge in 1968.

The York Furnace Bridge had a similar short life in the 1850s.