York County insects at Harvard, thanks to the Melsheimer family 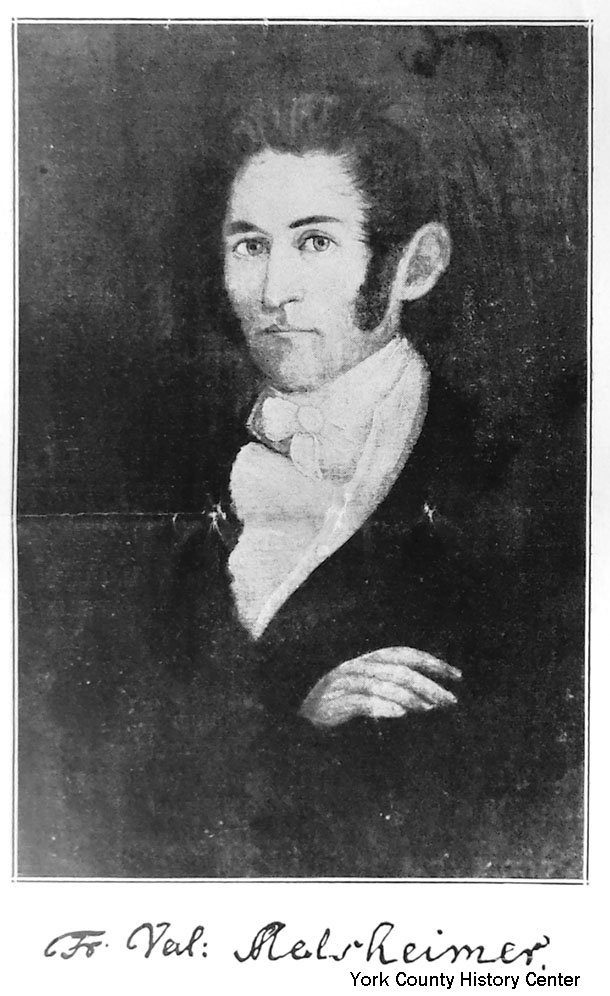 Hanover Lutheran pastor Frederick Valentine Melsheimer has been called the father of American entomology (insects). He was also a “Hessian,” who came to America with troops fighting on the British side during the Revolutionary War. If you have Melsheimers in your ancestry, there is a good chance that you descend from this family of clerics, physicians, printers and scientists who made their mark in early York County.

Melsheimer’s extensive collection of insect specimens ended up at Harvard, where they reside today. See my recent York Sunday News column below for more on the family and their scientific labors as well as a link to the Harvard collection: 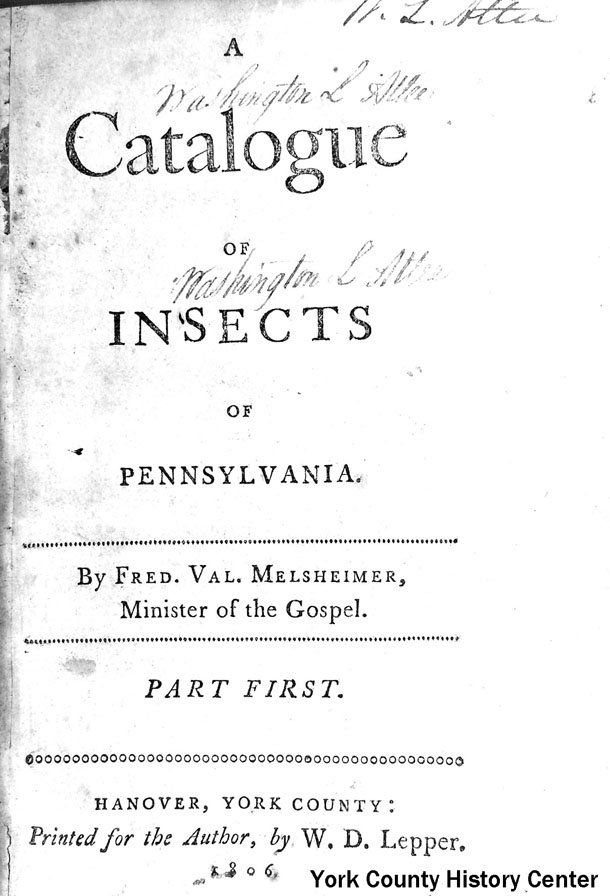 Did you know a long-time Hanover pastor was the earliest in America to publish a book on insects? Known as “the father of American Entomology,” Frederick Valentine Melsheimer (1749-1814) came to America in 1776 as chaplain of Braunschweig (Brunswick) troops under the command of General von Riedesel. The services of these auxiliary soldiers, often lumped together as “Hessians,” were hired from their Germanic rulers to assist the British during the Revolutionary War.

Melsheimer was taken prisoner at the Battle of Bennington on August 16, 1777. After being held prisoner for 14 months, he was paroled and sent to New York. When paroled prisoners were recalled in early 1779, he was transferred to Bethlehem, Pennsylvania. In May 1779 he was exchanged for Chaplain Cardelle of the 11th Virginia Regiment, held by the British. Melsheimer, who had been ordained a Lutheran minister in Europe, decided to stay in Pennsylvania, resigning his commission. That decision might have been influenced by his heart, as he married Mary Agnes Mau of Bethlehem in early June. Melsheimer first served several congregations in the Lebanon area and in northern Lancaster County.

In 1787, while still pastoring Lutheran congregations in the New Holland vicinity, he was elected professor of Latin, Greek and German at the fledgling Franklin College in Lancaster (one of the forerunners of present Franklin and Marshall College). Financial support for the college was not good, so Melsheimer was not being paid. Needing to support his growing family (he and Mary Agnes eventually had eleven children), he accepted a call to the Hanover charge in York County in 1789. According to Pastors and People by Dr. Charles H. Glatfelter, besides St. Matthew’s in Hanover, the other congregations were St. David’s, St. Jacob’s, Jerusalem, Ziegler’s and Menallen.

Born in Regenborn, Germany to the Duke of Brunswick’s superintendent of Forestry, Melsheimer was educated at the Holzminden school and at the University of Helmstaedt in sciences and the classics, as well as religion. August W. Knoch, German entomologist, was a boyhood friend. They traded insect specimens and compared notes through a lifelong correspondence. Since Melsheimer spent the last 25 years of his life in our area, many of the nearly 15,000 specimens in his collection could have been collected here.

Melsheimer’s A Catalogue of Insects of Pennsylvania was printed in 1806 by W. D. Lepper in Hanover. An article by Penn State professor Robert Snetsinger, published by the Entomological Society of Pennsylvania in 1973, states that Snetsinger located only 16 original copies of the 84-page book, one at the York County History Center.

The volume mainly consists of a listing of 1,363 identified specimens, classified according to the system of his contemporary, Danish entomologist Johann Christian Fabricius, with credit given to those identified by Knoch. In the book’s introduction, Melsheimer urges others to learn more about American insects, and offers to exchange his duplicate examples for those he does not have, and also to sell duplicates at the rate of five dollars a hundred.

Noting that he did not have time to describe listed examples, he contemplated publishing those observations as a catalog supplement. Due to pastoral and family duties and failing health, Melsheimer never attained that goal, but two of his sons carried on his interest. The specimens passed to John Frederick Melsheimer (1784-1829), successor to his father as Lutheran pastor at Hanover, who continued correspondence with eminent scientists such as Thomas Say of Philadelphia, also credited with parenting America entomology. Say, who published his own work, America Entomology, 20 years later, is said to have first given Frederick Valentine Melsheimer the title of “Father of American entomology.”

John Frederick’s brother, Frederick Ernst Melsheimer (1782-1873), a physician in the Davidsburg area of York County, became the next custodian of the collection. Frederick E. Melsheimer was one of the founders of the Entomological Society of Pennsylvania in 1842, along with York County pastor Daniel Ziegler and others. The seven-year-old Smithsonian Institution published Frederick Ernst’s Catalogue of the Described Coleoptera of the United States in 1853, and he was the president that year of the American Entomological Society. (Coleoptera is the scientific name for beetles, the largest order of insects, a specialty of the Melsheimers.) Both entomological societies are still going strong, welcoming new members.

Naturalist Louis Agassiz founded the Museum of Comparative Zoology at Harvard in 1859. He purchased the Melsheimer collection for Harvard in 1864 for $150 [about $2,250 now], noting in that year’s annual report: “The museum has obtained… the extensive type collections of insects from Dr. F. E. Melsheimer and Rev. Daniel Ziegler of York County, Pennsylvania. The former of these was the first considerable collection ever brought together in the United States, and was commenced more than 80 years ago by Frederick V. Melsheimer. Most of the oldest of these specimens, notwithstanding their age, are in a fine state of preservation.” The report states: “It contained 4,941 species, with 14,474 specimens. Coleoptera 4,674 species, with 14,075 specimens, of which belong to the U.S., 2,200 species, with 10,272 specimens… .” It goes on to list over 2,000 species of beetles from other countries as well as over two hundred insect species. Notably there were no Lepidoptera (butterflies and moths), although some sources say F. V. Melsheimer collected them. Daniel Ziegler’s collection was reported as 5,302 species with 11,837 specimens. His collection had 6,262 beetle specimens plus other insects.

The Melsheimer collection filled 41 gray-painted wooden boxes, 10 ½ by 14 by 2 inches. Each insect was labeled. Some of the Melsheimer collection is still identified at the Harvard museum, but Herman A. Hagen, Agassiz’s successor at the museum, reported some unfortunate occurrences in the late 19th century. Agassiz gave permission to John L. LeConte, another leading entomologist, to take any specimens from the Melsheimer and Ziegler collections he needed for his collection. LeConte later donated his whole collection to the museum and Hagen could still recognize the origin of incorporated items by the handwritten labels. Disaster struck when “a somewhat cranky assistant threw away labels…without any considerations whether they were… in the handwriting of the most eminent entomologists and replaced the labels by numbers referring to a carelessly written catalog.”

The Museum of Comparative Zoology has excellent photographs of their well-preserved entomology collection on its website. Surely a fair number originated right here in York County, but we do not know which specimens, all due to “a somewhat cranky assistant.”

Here is a link to the Museum of Comparative Zoology at Harvard.  As outlined above, attribution of many of the specimens collected by the Melsheimers and Ziegler was lost, but if you search by Melsheimer, you can come up with very good photos of some specimens.

This link will take you to my post and column on German Military Immigrants from the American Revolution in Pennsylvania. This book was recently donated to the York County History Center Library/Archives by the author, Nancy Rice Kiddoo.  Melsheimer is included in the soldiers she researched, as are many others who eventually settled in York County.