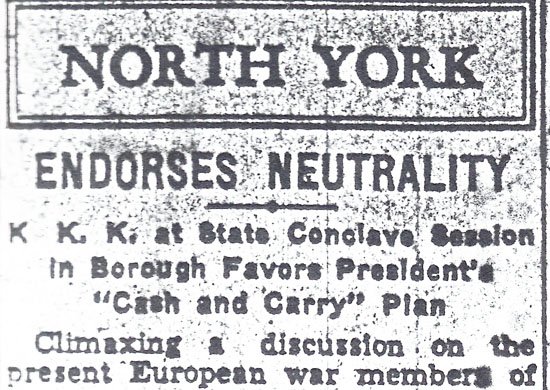 I admit I’m a cheerleader for York County history. Native Americans, about whom I know much less that I would like, made their homes in this area at various times over thousands of years. In addition, we are not very far away from the 300th anniversary of the arrival of the first European settlers on this side of the Susquehanna River. All these people have contributed to our rich and deep local history.

It’s not always pretty, however. I use the microfilmed York County newspapers at York County Heritage Trust as sources for many of my posts. Every now and then I come across something disturbing that I hesitate to share. But, if unsavory past incidents are brought to light, perhaps that can guide us to never going there again.

The report below, from the York Dispatch of October 16, 1939 is under the North York news banner. I’m sure any number of other York County municipalities could have just as easily hosted the convention. It is mind boggling to me to think that this was just 75 years ago.

Climaxing a discussion on the present European war, members of the Pennsylvania provincs of the Ku Klux Klan at their 13th annual state conclave in the borough Saturday adopted a resolution endorsing President Roosevelt’s neutrality program and the “Cash and Carry” plan.

Approximately 200 clansmen assembled in the Queen Street auditorium for the conclave. In addition to the resolution on the European situation the delegates also made public a resolution stating the Klan’s policy for the ensuing year.

State officers were elected and installed at the conclave sessions. Bradford, Pa. was selected as the place for next year’s gathering.

The conclave was brought to a close Saturday night with an outdoor demonstration, at which a large cross was burned on the hill at the rear of the auditorium.”

Click this link to go to the U.S. State Department websitelink to go to the U.S. State Department website for a fairly short explanation of the 1930s Neutrality Acts, including the “cash and carry” provision, that allowed United States manufacturers to sell anything except to arms to countries already at war, as long as they were immediately paid for and not shipped on American ships.