Old “City Directories,” which eventually covered small towns, suburbs and even rural areas are invaluable sources for researching the past. You can find out where your family members lived and worked; businesses, manufacturers, professionals, local government, churches and social organizations are classified, giving a glimpse into lifestyles. (It seems like York County always had plenty of food processors and vendors, from confectioners to oyster sellers.)

Advertisements, some with illustrations, show what merchants were selling and our ancestors were buying. The ads illustrated above and below are from John Denig’s York gazetteer and business directory for 1856, probably York’s first real city directory.

See below for my recent York Sunday News column for more of the varied information to be found York County directories:

City and rural directories give us a glimpse of the past

How can you find where Grandpa lived in 1920? Where was York’s Ramona restaurant in the fifties? Who lived in my house 50 years ago? Check the “city directories,” which carry a wealth of varied information.

The oldest directory found at the York County Heritage Trust Library/Archives was published by John Denig. It was probably the first local one, as he explains that there is a need for such a directory for York. The long title summarizes the content: York gazetteer and business directory for 1856: containing historical sketches of York borough, and parts of York county, Pennsylvania; with comments upon, and estimates of different branches of business done in York, and parts of York county. Historical sketches, of the different religious denominations in York Borough. Lists of its different societies, orders, fire companies, &c. also, a complete directory for the borough—names, occupations and residences of the business part of its inhabitants—number of voters in each ward—number of inhabitants in the county—colleges, academies and schools—lists of the post offices and merchants in York County—together with interesting miscellaneous articles and useful receipts. Also, advertisements for York, Baltimore, Philadelphia.

The statistics listed for the 8,000 inhabitants of York Borough, plus Freystown and Buttstown, now parts of York, show business categories that have since disappeared, like coal yards, tanners and hatters. Dry goods and grocery retailers throughout the county are listed, as are post offices and postmasters by township. Population of the county (57,450), from the 1850 census, is broken down into total “white” (56,325) and “free colored” (1,125) as well as male and female.

The 1856 directory has an entire page of statistics about schools, including students learning German and number of months school is taught in each township (mostly four, a few five or six– only York borough had classes nine months). Farm acreage is 396,812 improved acres and 110,940 unimproved.

York churches are listed, as is the Jewish congregation, most with a paragraph of history. The “useful receipts” are instructions for making substances such as dyes.

Denig doesn’t seem to have had difficulty selling ads; pages 50-96 consist of advertisements covering 1/8 of a page up to a full page. Even so, Denig’s directory may have been a one-time venture.

For the next few decades, directories were published locally, but by 1898 the directory giant, R. L. Polk & Co., was established in York, publishing volumes every other year, then annually from the late 1950s.

In 1913, $6.00 bought you Polk’s ninth edition of the York Directory Containing a Complete Directory of York City, North York and West York Boroughs, together with a Directory of all Boroughs (except Hanover) located on lines of York Railways Company, followed with List of Names of those served by Rural Delivery Routes Leaving York City Post Office. (Hanover had its own Polk’s.) It gave “Warning: Beware of Directory Borrowers: Do not lend your Directory. Your neighbor is as well able to buy a Directory as you are.”
Combined statistics for the three boroughs in 1913 show 98 clergymen, 15 horse dealers and 70 music teachers. Food providers include 29 retail confectioners; 45 meat dealers; 18 produce dealers, 16 fruit sellers, nine poultry dealers, 18 oyster dealers, 27 milk suppliers and 238 retail grocers. The general classified ads (pages 1054-1109) range from Abattoirs (Citizen Provisions Co. at Arch & Loucks) to Yeast Manufacturers (Fleischmann Co., 227 N. George St. & Puritas Yeast Co., 426 Salem Ave.) Fraternal groups were very popular: There are nine pages of secret societies, like Ancient Order of Knights of the Mystic Chain, and five pages of non-so-secret ones, such as the York Benevolent Society and YWCA.
In 1919 Polk introduced one of the most helpful features: “A New and Complete Street Guide and Householders’ Directory,” enabling the user to look up addresses to see who or what was located there.
After the street railway lines shut down in the late 1930s, the directories only covered York, North York, West York and East York. In 1961, Polk resumed covering more area, publishing two directories. The traditionally long descriptive titles were: Polk’s York City Directory 1961. Vol. XXXV. Including North and West York and Sections of Spring Garden and Springettsbury Townships: Containing an Alphabetical Directory of Business Concerns and Private Citizens, a Directory of Householders, Occupants of Office Buildings and Other Business Places, Including a Complete Street and Avenue Guide, Numerical Telephone Directory, Rural Route Descriptions, and Much Information of a Miscellaneous Character; also the Yellow Pages.
The other volume was Polk’s York Suburban Directory 1961. Vol. 1. Including Boroughs of Red Lion, Dallastown, Windsor, York, Hellam, Spry and sections of Springettsbury and Windsor Townships. (The rest of the title is nearly the same as for the other.)

The 1915 Farm Journal Rural Directory of York County, Pennsylvania deserves special mention because it covers all of rural York County. Each entry is coded with the number of acres, property ownership, number of horses and cows, and occupations of tradespersons. Some entries have a number to match on the accompanying county road map to find the general location of the resident; they might have had to pay extra for that listing.

The York County Heritage Trust collection currently goes up to 2003 and it includes some Hanover and Harrisburg volumes. The collection isn’t quite complete, because it has been assembled from donated volumes. The librarians are striving to fill the gaps and to obtain back-up duplicates. 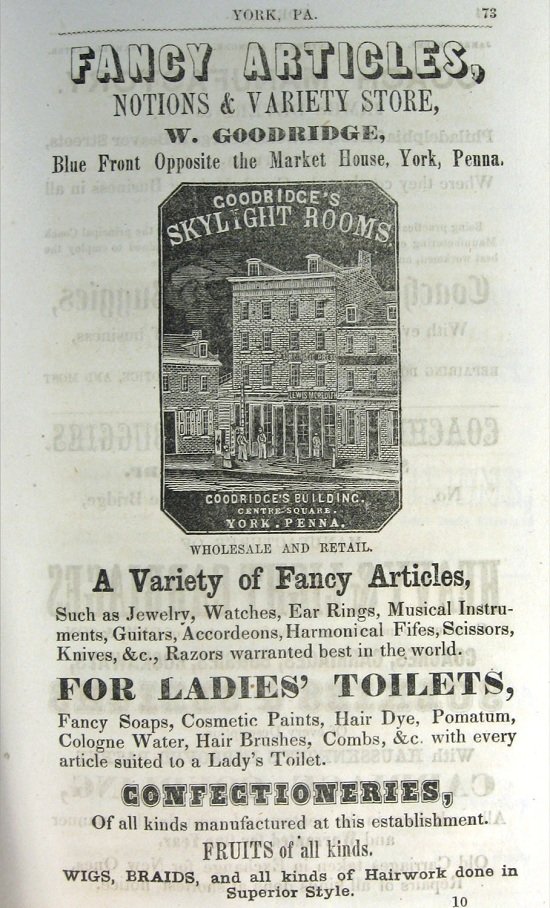