My last post outlined the 1948 fate of a covered bridge over the Little Conewago Creek just east of Zion’s View on Canal Road. It linked Conewago and Manchester Townships. At the same time a Hellam Township bridge over Kreutz Creek was also demolished for a more modern span.

York County bridges continued to be removed at a fairly rapid pace. See the June 7, 1954 York Dispatch article below, from the York County History Center covered bridge file, on the planned destruction of the Kunkle’s mill bridge:

Kunkle’s Mill bridge, one of York county’s few remaining wooden covered bridges, will be demolished and rebuilt in steel and concrete before Dec. 15 by the J.R. Nestlerode Construction Company of Lock Haven.

The Nestlerode firm today won the contract on a total bid of $48,633, as the county commissioners opened four bids on the job.

Nestlerode’s bid was $10,207 under the next highest, and $18,967 under the estimate made by county engineer James B. Long last September.

The covered bridge crosses the Big Conewago creek between Dover and Warrington townships. It is county bridge number 214. The reconstruction work has been moved up on the county’s schedule because of the condition of the present bridge.

The new link, 211 feet long, will consist of three spans, steel decking laid on concrete piers. It will be two lanes wide, doubling the capacity of the present one-way arrangement.

The difference between the Nestlerode price, which was read second, and the others was so great that one of the county commissioners asked, sotto voice, “Is this the same bridge?”

Gibson’s 1886 History of York County states that “The wooden bridge over the Conewago Creek at Kunkle’s Mill, at the northeast end of the township [Warrington], did not yield its position in the flood of 1884. It rested on two stone abutments, one at either end, and at a height of thirty feet above the water, crossed the stream at a breadth of 100 yards.” So the bridge survived a major flood, but it was no match for 20th century traffic.

As you can see by the Goggle street view image above, the 1954 bridge has been replaced in the meantime by a more modern span. Note that 214 is painted on the abutment, denoting it as country bridge number 214. 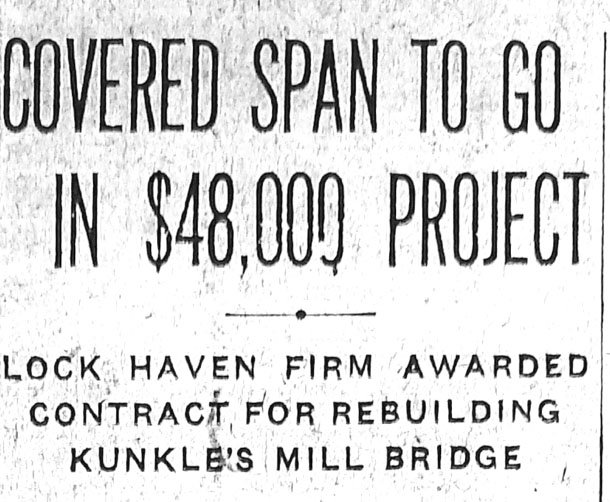