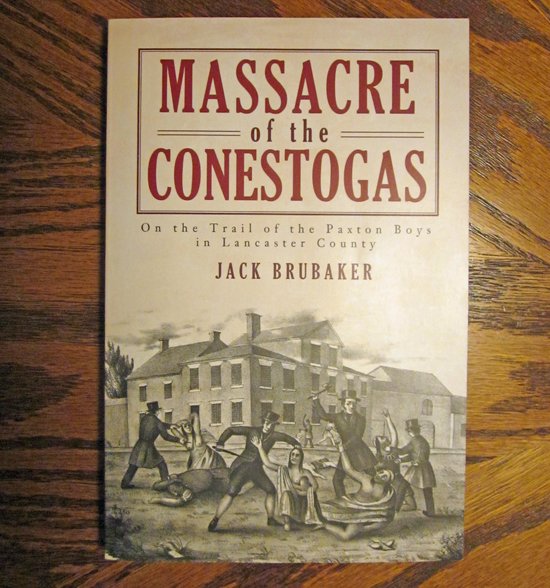 I enjoyed an interesting talk this evening at the Susquehanna Gateway Heritage Area Zimmerman Center. Lancaster County journalist Jack Brubaker talked about his recent book Massacre of the Conestogas: On the Trail of the Paxton Boys in Lancaster County.

I have done some reading on the massacre of the 20 men, women and children who were the last known Conestoga Indians, and I am anxious to dig deeper into this book. The first half dozen were surprised and murdered by the Paxton Rangers on December 14, 1763 at their village in present day Manor Township a few miles from Susquehanna River, just east of Turkey Hill. The site, near the intersection of Indian Marker Road and Safe Harbor Road, is marked by a modern blue and yellow historical marker as well as one of the older brass plaques mounted on a large rock.

After the killings, the other fourteen, who had been away from the village, were lodged in the workhouse next to the Lancaster jail, supposedly for their safety. On December 27, the Paxton Rangers entered the workhouse and slaughtered all the Indians. No one was ever brought to justice.

Of course, there are York County connections. First, these Conestogas were the remnants of the once-numerous Susquehannocks who occupied the last two Native America sites in York County. Those sites, at Long Level in Lower Windsor Township, have now been preserved. Click here to read my previous York Sunday News column on the Susquehannocks in York County.

Reverend Thomas Barton, had founded the Anglican congregations in York, Huntingdon (York Springs) and Carlisle. In 1763 he was the rector at St. James (now Episcopal) church in Lancaster, and it happened that most of the town leaders were attending a service at his church when the second massacre occurred.

Barton is said to have initially been friendly with local Indians on this side of the river and tried to convert some, but completely turned around at the onset of the French and Indian war, probably by the violence against the colonists. His congregations at York Springs and Carlisle would have been on the frontier at that time.

After the event Benjamin Franklin published a pamphlet condemning the Paxton Rangers. Thomas Barton answered with one defending them.

Another interesting angle: the Conestoga Indian town had been on about 400 acres of Pennsylvania land, and Barton was a friend of the Penns. Guess who eventually ended up with the use of that land.

I can’t wait to read Brubaker’s book and also another new one by James P. Myers Jr. entitled The Ordeal of Thomas Barton: Anglican Missionary in the Pennsylvania Backcountry, 1755-1780. It seems that our Reverend Barton was a very complex guy.

One more thing–there is a possibility that there were some Conestogas who left the community some time before. A lady at the talk said the story had been passed down in her family that they had some Conestoga blood. The story was they had lived in Washington Boro and Columbia, and she mentioned an Able family. Anyone have any clues?