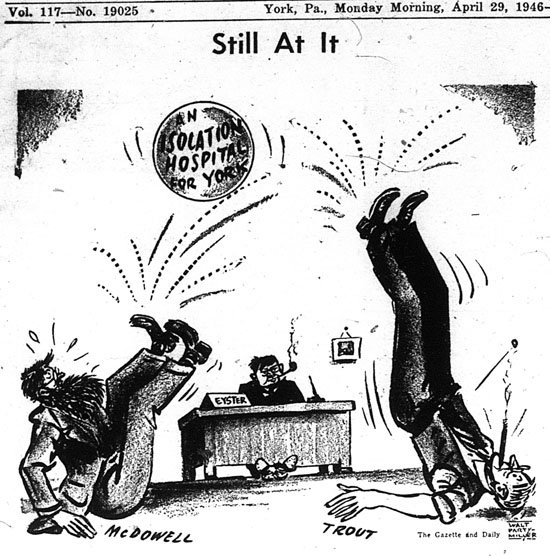 Those of us who were born in the first half of the 20th century remember what a big deal polio, measles, diphtheria, whooping cough and other communicable diseases were, before effective preventative vaccines were developed and immunizations were routinely available. Even those of us who were very small recall how ill we were. We also remember hearing of children who developed complications and died or were left handicapped for life.

As I explain in my recent York Sunday News column below, I remember a particular case involving a relative. What I didn’t know is that York County residents campaigned through most of the 1940s for an isolation unit, since most existing medical facilities turned away patients with contagious diseases. Two of the York County Commissioners were seen as procrastinating for years, seemingly because they couldn’t come to an agreement as to where the facility should be built. 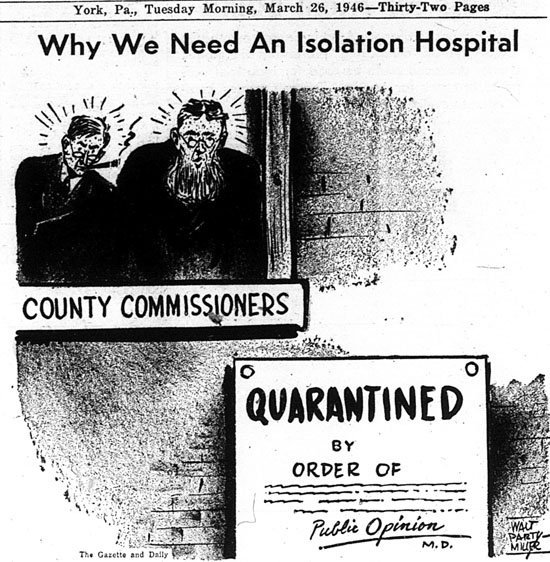 The newspaper articles are too numerous to cite, but here is a synopsis of the story:

Why did it take so long for York County to get an isolation unit?
There has been discussion lately about the possibility of adverse reactions to immunizations. For most of us who are old enough to remember how sick we were, and remember children who died or had lifelong handicaps from those diseases, there is no question of the value of immunizations.

I was recently telling my family that, even though I was only six at the time, I distinctly remember when Deanna Douglas, one of the few children near my age in our rural part of York County and a third cousin, died after she contracted measles. A few days after that conversation, another distant cousin left some family information for me at York County Heritage Trust. The top paper was the front page of the April 3, 1946 Gazette and Daily. The headlines read: “Young Girl Dies After Pleas For Her Hospitalization Fail. News Of Tragedy Interrupts Co. Commissioners’ Session.” It continues: “Tragic passing of Deanne Ilene Douglas, 7, underscores lack of isolation hospital facilities in York County. Child refused admittance to York hospital because of the communicable nature of her illness. Commissioners, charged with providing care in such cases, have consistently failed to act on isolation hospital proposals.”

The 1946 newspaper microfilms at YCHT carry story after story about the need for an isolation hospital and that it hadn’t even been approved yet because of the inactions of two of the three county commissioners. V. Carrol Shaffer, a 16-year old from New Freedom, died the same day as Deanna, also of measles complicated by pneumonia. The doctors attending both youths thought their chances of survival would have been better if hospital care had been available.

The Visiting Nurse Association and others advocated for a York isolation unit as early as 1941, with the County Commissioners even then officially acknowledging the need. Measles epidemics followed a three to five year cycle, with 2,000 reported York County cases in 1942 and comparatively few in 1943, 1944 and 1945. The 338 cases reported by mid-April 1946 showed a definite upswing. Some schools, such as Violet Hill elementary, closed down for several days.

Patients with other communicable diseases, such as polio, scarlet fever, mumps, whooping cough, spinal meningitis and chicken pox would also be cared for in the unit as needed. The small West Side Osteopathic Hospital offered isolation space on an emergency basis, but medical care would have to be provided by the patients’ own physicians. They too advocated a county unit.

York Hospital was embarking on a major expansion, and had just presented a proposal on March 22, 1946 to commissioners Howard E. Eyster, Walter L. Trout and James McDowell. The hospital was committing to (1) furnishing the site; (2) space for future expansion and supervision of operation; (3) hospital manager to assist in administration; (4) hospital superintendent of nurses to supervise professional help; (5) hospital office manager to supervise statistics, reports and details; (6) hospital pathologist to supervise pathological reports; (7) hospital radiologist to supervise X-rays requested; (8) services of hospital registered pharmacist; (9) services of hospital registered dietitian; (10) as far as possible, interns and resident medical staff to assist attending physicians; (11) as far as possible, student nurses to assist in nursing care; (12) engineering services by hospital; (13) services of registered engineer already engaged to supervise construction of new hospital unit and nurses’ home; (14) collection of cost from those able to pay, to be credited against operating expense each month; (15) each month bill commissioners operation expenses for previous month, providing names and addresses of patients and days confined.

The hospital asked that the commissioners agree to (1) provide for erection of the communicable disease unit, as well as equipment and necessary operation supplies; (2) pay for all utilities through separate metering or prorated by space; (3) pay for insurance, repairs and replacement of fixtures and equipment; (4) pay for care of unit patients, including dietary and laundry services, drugs, plasma and oxygen, as prescribed by attending physicians and for X-ray and laboratory work; (5) pay for printing, stationery and other supplies; (6) pay for services of graduate nurses necessary for operation and janitor and maid services.

The hospital stated that “the proposed unit will be used for the care and treatment of full-pay, part-pay and free patients who may require hospitalization for the treatment of any communicable diseases, provided that the admission of such patients has been approved by the County Health office or the City Health officer… .” Non-residents of York County would be admitted on approval by county commissioners, except for emergencies.

Eyster advocated a timely and favorable decision, telling his two associates: “Let us not take another six years to think about it.” They agreed to accept the proposal “for study.” The hospital tried to establish a deadline of April 1, 1946 for the commissioners’ approval if the unit was to be included in the planned York hospital expansion, but to no avail.

That Sovereign Knowledge: A History of the York Hospital and Its Medical Staff, 1880-1980 by Florence LaRose Ames relates how the impasse was finally resolved: In 1947 the hospital told the commissioners if they would contribute only $50,000 of the $235,000 cost of the unit, there would be no obligation to operate and maintain the facility. The commissioners agreed, but the project still moved very slowly. Polio was running rampant, with over 40 local victims by mid-summer, and the July 25, 1947 York Dispatch reported that action was being “demanded.”

The Campbell Chain Company then donated $200,000 for the unit, paying most of its cost. The county’s $50,000 was eventually reallocated for a free ward in the $2,225,000 hospital expansion. The George J. Campbell Isolation Hospital, which connected to the main buildings by tunnel, wasn’t yet finished when it admitted its first emergency patient January 7, 1949. She was a six-year-old patient with measles who had developed serious pneumonia. One can only think how the lives of the Douglas family and others would have been changed if the politicians had moved faster.

The unit served the area well until made obsolete by the development of vaccines for prevention of communicable diseases, as well as improved penicillin to combat infections. It was torn down in 1970 for a new education building on the site. 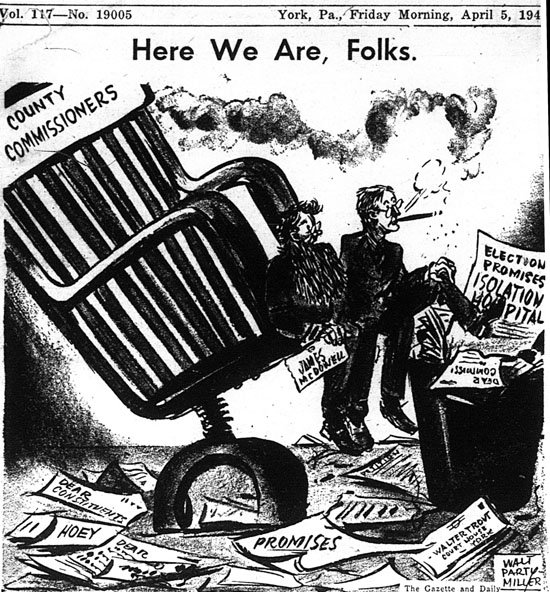