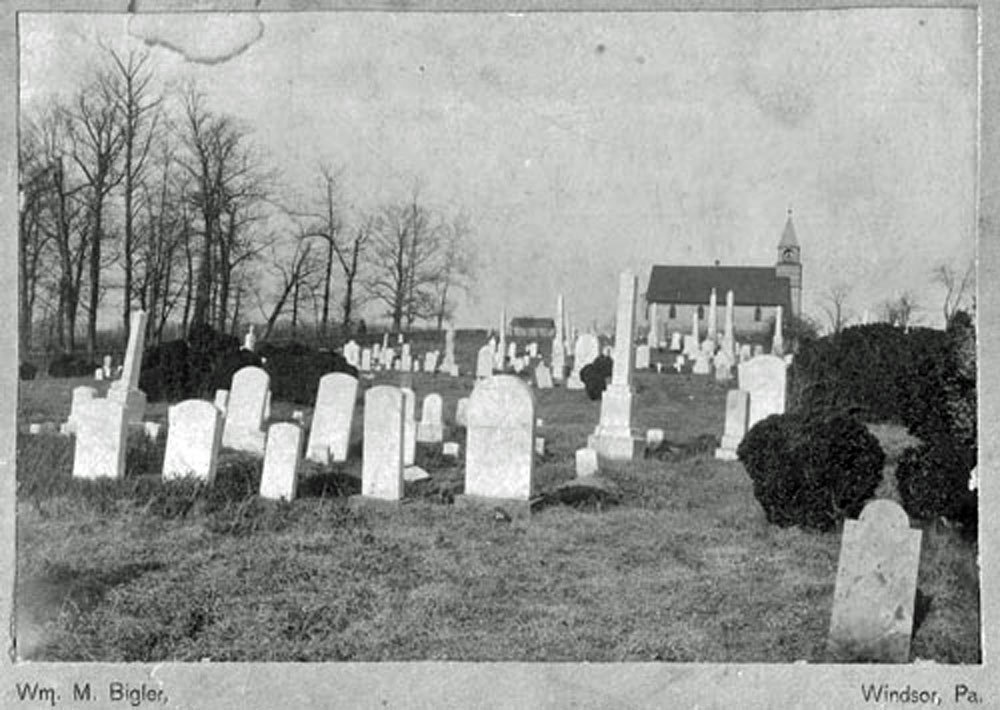 York County Cemetery Records Go Back to the 18th Century

St. Luke Lutheran cemetery ca.1900
I’m on the Cemetery Committee at my church, St. Luke’s Lutheran in Chanceford Township, where both my husband’s family and mine go back over 200 years. The cemetery was one of about 500 cemeteries in York and Adams counties that were recorded during the 1930s by the Historical Society of York County (now York County Heritage Trust).
Over the years some individuals have updated records of some of the cemeteries, working with copies of the original cemetery census and adding many burials from the past 70-80 years. They have deposited copies of the updates at the YCHT library, so that they are available to researchers working on family and local history.
St. Luke member Rick Craley reread all the St. Luke gravestones last summer, and a printout will soon be available for use at YCHT. In conjunction, I put together a brief history of St. Luke cemetery and am including it below. Even though it focuses on one church cemetery, it is typical of the many old cemeteries scattered throughout York County. Thanks are due to Lila Fourhman-Shaull, director of the YCHT Library/Archives, for sharing her notes. She has been researching all of the 370+ York County cemeteries for many years.

St. Luke’s (Stehli’s) church was organized in 1772, as a Union church, with Lutheran and Reformed congregations, with records going back to 1773. The first log church and first part of the cemetery were located on one acre, 126 perches surveyed off of a tract Jacob Stehli had called “Icy Hill.” It is now the far western portion of the cemetery. The log church was replaced by a brick building on the same site in 1866. In 1889, the Reformed congregation dissolved and the Lutherans replaced the brick church with a frame building on the eastern side of the cemetery.
After the first purchase of about 1 ¾ acres from Stehli (also Stahley, Staley), which wasn’t recorded with the York County Recorder of Deeds until 1821, the congregation purchased land as needed over the years. Subsequent purchases included 2 acres from Jacob Tome in 1892; about 2 ½ acres from Frederick and Mary Uffleman in 1889; about 2 7/8 acres from John and Ida Shenberger in 1903, 2 acres from Edwin and Edna Hurst and Gerard & Rhoda Nissley in 1980 and 3 acres from Barley family members in 2000.
Various sources list George Keener, John George Stermer, Henry Tome and William Sangrey as Revolutionary War veterans buried at St. Luke, along with Civil War veterans Michael Hoke, Geo. M. Heffner, Wesley Heffner, Isaac Crewson, Frederick Emenheiser, Henry Arnold, Michael Shoff, Jonathan Dellinger, John A. Heffner, Geo. S. Surrick, Christian Overlander and Conrad Runkel. Milton Ellis was a veteran of the Spanish American War.
The stones in the older part of the cemetery are in German. The earliest legible date of death on a gravestone is that of Nicolaus Troutwein, who died December 17, 1799. There were undoubtedly earlier burials, but many early stones are no longer legible and some are marked only with initials. Some graves were probably not permanently marked and some markers have disappeared over the years. Some even came back–in 1962 four very old stones that had been stolen in 1946 showed up at the cemetery. Extensive landscaping and leveling was done in the 1920s. At that time the Cemetery Association became a separate corporation. More leveling was done in 1946 and St. Luke had Silbaugh Memorials do restoration work in the cemetery in 1989. There were about 800 inscriptions included in the 1932 transcriptions. That documentation, as well as the current one, becomes more valuable over time as the old stones erode and the inscriptions become less legible.

Click the links below for more on York County cemeteries.
Cemeteries sometimes get moved.
Sometimes the locations are difficult to track down.
And sometimes they just disappear.
Click here a list of all Universal York posts. You can search for keywords in the titles by using “Find on this Page.”
You can also search with Goggle, Bing or other search engines by typing universal york and a subject into the search box.