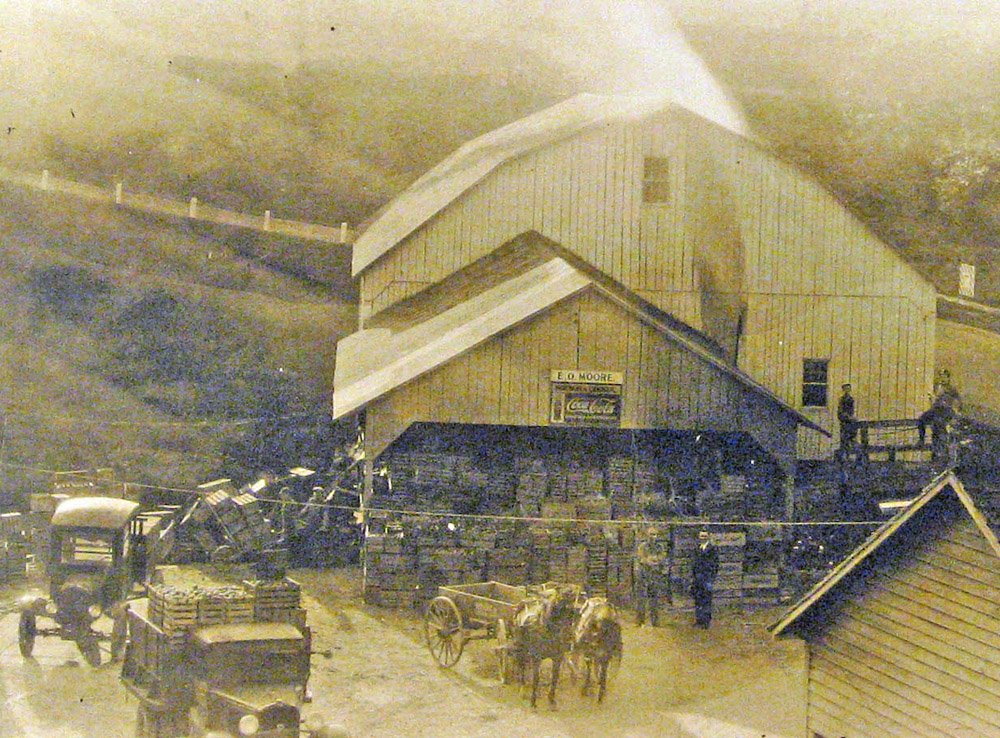 Lucky canning house, probably 1930s
My 96-year-old mother-in-law remembers picking string beans at farms in Chanceford Township when she was 10 or so in the 1920s. She says she picked beans during the day and then helped snip them at the Lucky canning house in the evening.
I purchased a Lucky canning house ledger covering September through November, 1943 at a yard sale a few years ago and donated it to the York County Heritage Trust Library/Archives. The ledger shows that they were canning corn and tomatoes then.
Wholesale customers for canned corn included Daugherty & Ward, Crisfield, Del.; Fulton, Mehring & Hauser, York; Oriental Paper & Bag Co.; District Wholesale Grocery Co. and Sprague, Warner, Kenny Co., all of Washington, D.C.; Maryland Gro. Co. Baltimore, Md. and Audment Bros., Lancaster, Pa. The U.S. Government purchased both 1,500 cases of corn and 3,750 cases of tomatoes, perhaps to feed World War II troops.
See below for my recent York Sunday News column on York County canners and vegetable pickers and also a photo of the Lucky cannery workers.

In 1948 commercial canning of vegetables and fruit was at its height in York County. Several lengthy newspaper articles that year stated that York County led the state in processors. In 1947 York County canners had shipped 1,141,239 cases of peas, 475,356 cases of green or wax beans, 586,062 cases or corn and 559,198 cases, plus impressive amounts of other vegetables and fruits. These statistics are based on 24 No. 2 cans a case, multiplying out to a staggering amount.
Hanover Foods has carried on that tradition in the county, becoming a big contender in food processing, as has Knouse Foods in nearby Adams County, but the smaller neighborhood canneries are long gone. They dotted the countryside, especially across southern York County, perhaps because of the ease of shipping from there to Baltimore and further points, first by train and then by truck.
Successful preservation of cooked food in sealed bottles and cans is said to date back to the time of Napoleon, when chef Nicholas Appert answered the general’s call for a way to keep food safe to feed French armies.
Commercial canning in York County is traced back to 1874 when D. E. Winebrenner left his father’s tanning business to start a canning house. Winebrenner urged local farmers to raise enough vegetables to keep the cannery supplied.
Soon other canneries sprung up, providing a close market to which farmers could quickly transport their fragile crops. Canners sometimes contracted with the farmers in the spring for their later harvest, at times not charging for seed until it could be deducted from the price paid the farmer for the delivered crop.
I’m not certain how many canning houses there were in York County. The 1920 Industrial Directory of Pennsylvania listed fifteen, but there were many more. The 1948 articles mention Spring Grove, Codorus, Airville, Hanover, Delta, Stewartstown, Laurel, Fawn Grove, New Freedom, Woodbine, High Rock, and Hungerford. Some of the smaller canning houses subcontracted for larger firms, such as the one at Shenk’s Ferry in Chanceford Township, which canned for Flinchbaugh & Leber, Red Lion. Labels still exist for tomatoes the little Shenk’s Ferry canning house canned, under the “Avondale” brand, for the Kroger Foods chain of the Midwest.
One of my childhood memories is the distinctive odor of piles of discarded tomato skins outside the Brogue canning house. It is gone but still commemorated by Canning House Road. My father’s diaries from the 1940s show that he trucked many a load of tomatoes out that road to the canning house. Accounts for individuals in a ledger from the Lucky canning house and general store, now at the York County Heritage Trust, mixes crops sold, seeds and canned vegetables bought and necessities, such as shoes, underwear and gasoline purchased, on one page.
Some canning businesses grew to substantial size. The Chas. G. Summers Canning Co. in New Freedom was one of the largest in Pennsylvania in the mid-1940s, canning
peas, green & wax beans, tomatoes, baby limas, corn, mixed vegetables, onions and dried beans. Their “Superfine” label vegetables were distributed in all states east of Mississippi and all major marketing in the west.
A 1963 biography of William A Free, Sr., founder of Hungerford Fine Foods says his firm is “Considered one of the leaders of the canned onion industry.” Hungerford Packing Company was among the recipients of the War Food Administration “A” Award and subsequent “star awards” during World War II.
Government bodies were big customers of local canneries, large and small, during wars and peacetime. The writer of one of the 1948 articles felt that quality was somewhat sacrificed for quantity during wartime, but the armed services, government hospitals, state and private institutions meant sales of tons of the big No. 10 cans by the local canners. The 1943 Lucky canning house ledger reflects World War II production and rationing. It lists many thousands of “points” under sales to wholesale distributors such as Fulton, Mehring and Hauser of York and District Wholesale Grocery of Washington, DC, and the notation “Ex of Points” for the 1,500 cases of tomatoes and 3,750 cases of corn sold for a total of $13,439.54 to the U. S. Government that November.
Marketing wasn’t too bad those days: The Oct. 28, 1940 issue of Life Magazine carried a two page spread in full color sponsored by the Canned Pea Marketing Institute. It declared October 21 to November 15 as “Canned Pea Carnival,” and offered seven tasty recipes for artfully photographed dishes, including “Individual Salmon Mounds with Canned Peas” and “Mushroom Fondue with Canned Peas and Cheese Sauce.” A drawing of a smiling boy and girl is captioned “Canned peas are easy to digest and a wholesome source of energy. Children love then.” The ad lists 120 top pea processors, including the Summers Co. of New Freedom and the Winebrenner Co. and Hanover Canning of Hanover.
After World War II labor needs were intense. Whole families, often Polish from Baltimore, moved up for the harvesting, often living in plain housing constructed for them. Men, women and children would work in the fields, pooling their earnings by family. Help also came from Puerto Rico, but after 1965, because of mechanization of harvesting and processing, only local people were needed.
The small canneries are gone, but it’s nice to know that the tradition of growing and processing quality canned and frozen food is still a large part of the economy of our region, a heritage of which we can be proud.