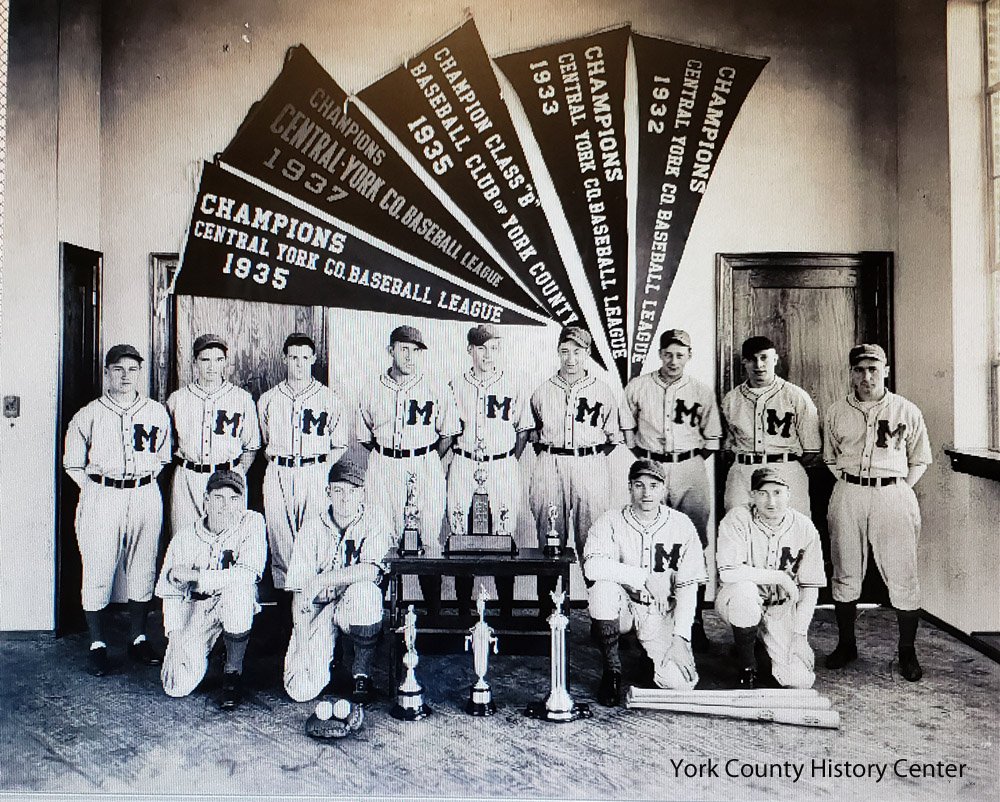 I admit I know only the basics of baseball, but I might be in the minority in York County.  For as long as I can remember, family members followed their favorite major league teams on radio and television, as well occasionally trips to the ball park to see the action in person.  Now that we have the York Revolution, our own minor league team, I have been to a few of those games too.  But York countians have never had to travel far to see a game with the proliferation of community teams for well over a century.  My recent York Sunday News  column below recounts the state of  four York County baseball leagues up until 1940.  My next column will give the history of the other four leagues active that year.

York County and baseball is a massive subject.  York countians have loved to watch it, discuss it and maybe most of all, play it, since the game became widely popular at least 150 years ago.

I grew up tagging along with my dad to community baseball games.  By the time I came along he had hung up his spikes and was umpiring, but I have photos of him in earlier days in his Brogue and Lucky uniforms.  Back then even the tiniest village was apt to field a team.  Lucky is a case in point.  In its heyday there was a house or so, a couple of barns, a general store and a canning house.  But—Lucky did have a ball field laid out down by Otter Creek.

I found a good introduction to those community baseball leagues in the York County History Center baseball files.  In the spring of 1940, just as baseball season was about to begin, the York Gazette and Daily  ran an eight part series “Tracing the History of York County’s Baseball Leagues.” It gives you an idea of how baseball blanketed the whole county.  Perhaps some of your relatives played with one of these many teams.  I will attempt to condense some of that history in this column and my next one.

The first installment gave an overview of the need for organized leagues because of the popularity of local baseball. It said the July 2, 1908 Gazette reported that more than 100 teams would play holiday games “in every village and town” in the county.   Shrewsbury, Seven Valleys, Glen Rock and New Freedom , the four teams of the new Southern York County League played their first game on May 29, 1909.  Glen Rock defeated Shrewsbury in the October 16 playoff game, and the victors were welcomed back to the borough by the Glen Rock band and a “large crowd.”  This league operated until 1939, pausing operation during the war years, as did other teams.

Harry L. Haines, Red Lion, and others organized the York County League in 1916 with six teams.  Red Lion won the first championship.  The league cut their 1917 season short, since many players were responding to the call to arms. The league reorganized for the 1922 season, continuing until succeeded in 1938 by the York-Adams circuit.

The writer names a dozen other teams that came and went before 1940, including the original Susquehanna League, probably the coalition in which my father’s early teams played.  The remaining 1940 columns are devoted to the history of each of the six leagues active in 1940.

The second column thus tells about the Central League.  Their organizational meeting was held at Green’s Restaurant in Emigsville at the end of March 1931, with the idea of developing younger players.  Six teams: Brookside, York New Salem, Pleasureville, Emigsville, Mt. Wolf and New Holland were ready to play by May 2.  New Holland won the first championship in a “thrilling race.”  Shiloh and Manchester signed on in 1932, for an eight-team league.  Over the years, teams would come and go, as was common with all the leagues. The leagues themselves stayed steady with six or eight teams a season. By 1940 North York, York Haven, Dover, Lincoln Park and Hallam also had fielded teams in the Central League at one time or another.

The third article tells of the Western League, organized in 1933 with Seitzland, Dallastown, Railroad, Bupp’s Union, Jefferson, Shrewsbury, Winterstown and Brodbecks.  Railroad won the first championship. Since seasoned players were already playing in established leagues, the Western League aimed to give younger players a chance to play and develop their skills. Teams revolved in and out of this league frequently, with Glen Rock, Dallastown St. Joe’s, Loganville, Glen Rock CCC, York New Salem, Bair’s Station, Thomasville, Hanover, Red Lion and Stoverstown also each playing a season or so in the Western League’s first seven years.

The Twilight League is covered in the Gazette and Daily’s fourth column.  Windsor beat Long Level 10-1 in the June 1, 1925 first season opener.  Other teams were East Prospect, Red Lion, Dallastown and Yoe.  Most other leagues played Saturday games, but this league seems to have locally pioneered “twilight contests” during the week.  The first season was said to be a great success, with the championship series drawing huge crowds. East Prospect’s Hop Sitler hit an 11th inning home run with the bases loaded to lead his team in a win over Windsor in the final game.  Felton, Victory, Hallam, Spry, Conrads, Wrightsville and Jacobus joined in at various times over the next 15 seasons, with Windsor the only team to play continuously from 1925 through 1939.

My next column will look at the origins of the Eastern League, Greater League and York-Adams League.  All three were slated to be quite active in the upcoming 1940 season of York County amateur organized baseball.  I will also share some information on the 1930s Susquehanna League, gleaned from my father’s diaries.

Here is link to my previous column on an early era of York County minor league baseball.

Below is another photo from the York County History Center collections of a Manchester championship team from a few years earlier than the one above.  These players are identified, and some are probably the same as on the other photo.